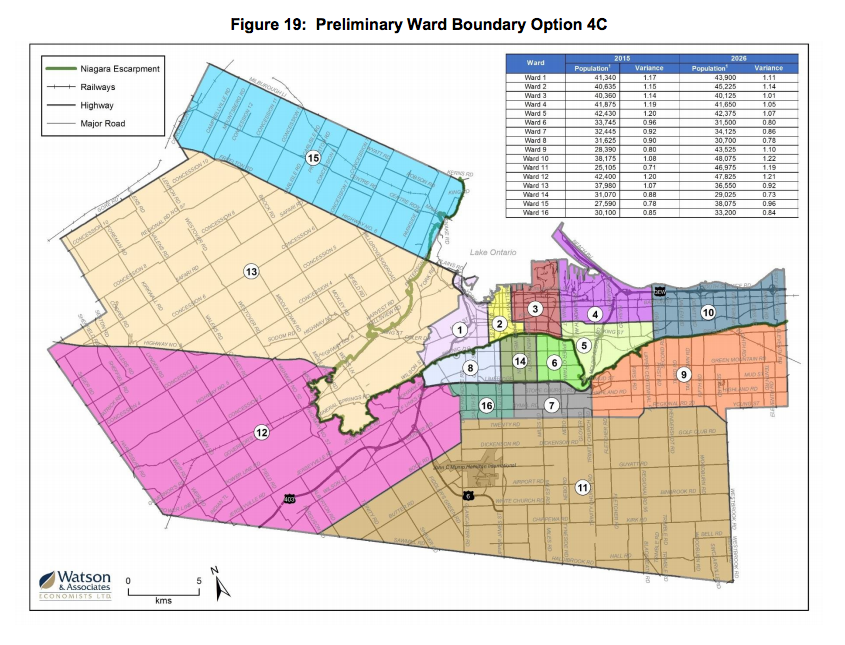 The Ontario Municipal Board’s ruling on Hamilton’s ward boundaries is expected in the coming weeks, it must be issued prior to December 31, 2017.

I expect the hearing will not just be locally relevant, but will be a landmark precedent that will guide the criteria for ward boundary reviews in Ontario for the next 20 years.

The hearing was presided over by the Executive Chair of the Environmental and Land Tribunals of Ontario Dr. Bruce Krushelnicki. He is the highest-ranking member of the Ontario Municipal Board. As ELTO Executive Chair, he oversees all five of Ontario’s environmental and land tribunals. He is not randomly assigned cases, and regularly handles complex matters in which rulings have significant impact both in the effects of the ruling itself, and the precedent set for future similar matters.

Krushelnicki’s statements during the hearing indicate that he is set to make a landmark decision. The most revealing statement came during closing arguments when he stated “let it be known to those who write academic papers on this case in the future … that we were alive to and gave great consideration to this issue [visible minorities]” (Day 7 LiveBlog, 11:46)

Very few OMB decisions have academic papers written on them; and those are the major landmark decisions that create criteria frameworks and provide clear direction to municipalities.

Dr. Krushelnicki’s statement must be seen in the context of him holding a Ph.D and having been a faculty member at Brock University.
During this hearing, in a major tactical error, one of the City witnesses entered the 1969 “Decision of the OMB re Ward Boundaries in the City of Toronto”. This decision, which overturned Toronto’s Council’s “strip” wards. The “strip” wards were designed to disenfranchise lower socio-economic class voters. OMB Chair Joseph Kennedy, in a landmark decision, refused to approve the wards, establishing the OMB has the guardian of fair voting in Ontario. This ruling has been subject to numerous academic papers and dissertations.

The Ontario Municipal Board does not operate with doctrine of precedent; hearings are not bound to previous decisions and each hearing chair can make their ruling without constraint to previous rulings.

In practice, previous cases are heavily cited and built upon.

I expect the ruling will provide a clear framework to municipalities on ward boundaries, and will finally put to rest a hodgepodge of conflicting OMB directions.

During the past 20 years, the OMB has wrestled with municipal representation since the mega-amalgamations of the late stages of Premier Mike Harris’ government. There were 815 municipalities when Harris became Premier in 1995. By 2002 when Harris resigned as Premier, that number had decreased to 447 municipalities. Today there are 444 municipalities in Ontario.

In Hamilton, five suburban municipalities were rolled into the City of Hamilton.

The forced amalgamations of 2001 created new municipalities which merged different communities of interest together; rural and urban areas were combined. In many places, such as Hamilton and Ottawa, these communities were brought together under the new framework of single-tier municipalities.

Only three years prior, in 1998, the six municipalities of Metropolitan Toronto were merged into the new City of Toronto – a single tier city replacing the previous two-tier Metro Toronto structure.

The Municipal Act was never amended to provide guidance on how to govern these new mega-cities (as they were called 20 years ago), what criteria should be used for the creation of the wards, and even how those reviews should be conducted.

Instead, all the Municipal Act states is that municipalities are authorized to “divide or redivide the municipality into wards or to dissolve the existing wards”. The Act allows for citizens to petition to demand a municipality review its wards.

Ward Boundaries Created on the Fly

Hamilton’s present wards were created by Ontario Regulation 448/00 and only intended to last one electoral cycle. Instead, these wards have been used in an additional four municipal elections.

The boundaries themselves were designed with political convenience, not proper and effective representation, in mind. The primary goal of the Hamilton wards was to appease the Progressive Conservative base in the five suburban municipalities by creating a “balance” where, combined with the Mayor, the suburbs would have a veto against the eight Hamilton councillors. Hence, seven suburban wards.

Ironically, the Tories would see their Wentworth-Burlington MPP Toni Skarica resign in protest of amalgamation, and newly redundant Flamborough Mayor Ted McMeekin take his place, winning the riding in a by-election for the Liberal Party. The Tories would loss their other suburban Hamilton seat, Stoney Creek, during the next election in 2003.

Across Ontario, amalgamated wards were created by provincial regulation in Haldimand, Norfolk, Ottawa, Sudbury, and Waterloo.

Reconciling Rural and Urban Across Ontario

Most municipalities moved quickly to conduct their ward boundary reviews after the 2001 amalgamations, and to replace the provincially imposed boundaries. Ottawa decided to create wards where the primary consideration was representation by population.

The resulting wards mixed urban and rural areas, and lead to an appeal to the Ontario Municipal Board, the Ottawa (City) v Osgoode Rural Community Assn 2003 case. In the ruling, which is not available online, the most often referenced line from the ruling is “the Board was of the opinion that Council did not give sufficient weight to communities of interest and, in particular, rural communities of interest”.

It is one of the most cited cases, and has set the direction for OMB single-tier municipal ward reviews ever since.

In the Hamilton case heard last month, it was the most often cited case by the City to advance it view that rural representation overrides all other considerations of the Carter Criteria from the 1991 Supreme Court of Canada Reference re Provincial Electoral Boundaries (Sask) decision.

The lawyers representing Hamilton City Council have a good primer on the Carter Criteria here.
The question is the Ottawa criteria the only criteria? Should it be? Or do we need a more clearly articulated framework for ward boundaries in mixed rural/urban single-tier municipalities?

Twenty years after Premier Harris combined hundreds of municipalities, this debate is seeking an answer.

Why would Krushelnicki choose Hamilton to preside over as a case? Hamilton is a microcosm of Ontario’s 444 municipalities.

We have rural hamlets, farming as a major industry, old urban, renewing urban, inner suburbs, outer suburbs, numerous growth nodes, are part of the Greater Golden Horseshoe, greenfield, brownfield, concentrations of visible and cultural minorities, homogeneous “Anglo-Saxon” suburbs (City’s own terminology), strong geographical features with major highways and rail lines, and all of these interests have to be balanced to create wards.

A ruling on Hamilton can be applied elsewhere in Ontario, and a comprehensive decision can provide guidance to other OMB members reviewing ward boundaries in the future.

The primary role of the ELTO Executive Chair is to provide direction to the tribunals on major matters, they do so in their written decisions.

Hamilton is still using the interim ward boundaries set at Queen’s Park in 2000 for political convenience. With the boundaries of Wards 1 to 8 set in the early 1980s, Hamilton’s wards must change, and with all wards requiring review, the Executive Chair is granted the unique opportunity to write a ruling that balances all these factors.

A key piece of evidence in the hearing is an academic paper on minority voter dilution written by McMaster Political Science Ph.D candidate Rachel Barnett with her supervisor Dr. Karen Bird. Barnett was a participant in the hearing, speaking to her findings in front of the Board.

The City objected to her speaking, and to the introduction of the paper. The City’s position is that it did not consider visible minorities during the Ward Boundary Review, and therefore it was not an issue the Board should be allowed to consider.

Barnett’s paper showed that Hamilton’s existing ward boundaries, by granting more representation to the mostly Anglo-Saxon suburbs, dilutes visible minority voting power. Hamilton’s dilution is the worst among Ontario municipalities, the result being that visible minorities are less likely to be able to obtain effective representation.
Krushelnicki, during City arguments attempting to diminish Barnett’s work, that it is a “a credible paper” and “very useful to the Board”.

He continued, “We now have a visible minority interest that has grown over the years”. Adding that as visible minorities “reside in wards with less power, they have low power” in municipal government.

“In Ottawa they worried about the lose of voice in the rural areas … Just like the rural people will lose their interest, Ms. Barnett argues the same will happen for visible minorities due to voter dilution”. (Day 7 Liveblog, morning recap)

Here’s a key quote from the OMB Exec Chair on protection of visible minorities “That’s okay to say about the rural area, but other communities than the rural area are not deserving of protection”. (Day 7 Liveblog, 11:42)

During a separate line of questioning with Dr. Robert Williams, an expert in municipal ward boundaries who was involved with the Watson & Associates team and key City expert witness, Krushelnicki suggested that the Carter Criteria must be read as protecting vulnerable or disadvantaged minorities.

The acceptable of this paper, and the lines of questioning during the hearing, indicate that Krushelnicki will be provide a line framework for applying weighting of minorities interests in considering the Carter Criteria.

The Hamilton appellant, Robert Dobrucki, brought forth the City’s refusal to release population projections and geographical data in open formats during the boundary review. Dobrucki devoted much of his time to this issue.

During closing arguments, the City’s lawyer argued against Dobrucki’s position stating the City was not required to release data.

Krushelnicki interjected ‘Wouldn’t releasing the data increase public confidence, help find errors – such as were pointed out in this hearing – and make for a better process?’

He continued stated it is “admirable” they are citizens who are willing to engage so fully with the process, and suggested it may be time for the OMB to direct that data be released in open formats to the public. (Day 7 Liveblog, 10:50)

The Time Has Come for Clarity

Both parties submitted to the Executive Chair binders full of case law and past OMB hearings on ward boundaries. Each could point to cases that supported their position, and often cited the same cases to advance conflicting arguments.

It’s reflective of how disjointed the Boards rulings on ward boundaries have become over the past decades, much more so since the Harris mega-amalgamations.

Dr. Krushelnicki’s appears posed to solve this problem, and definitely hinted he is moving in this direction. We’ll see what he does in his ruling, the release of which is imminent.