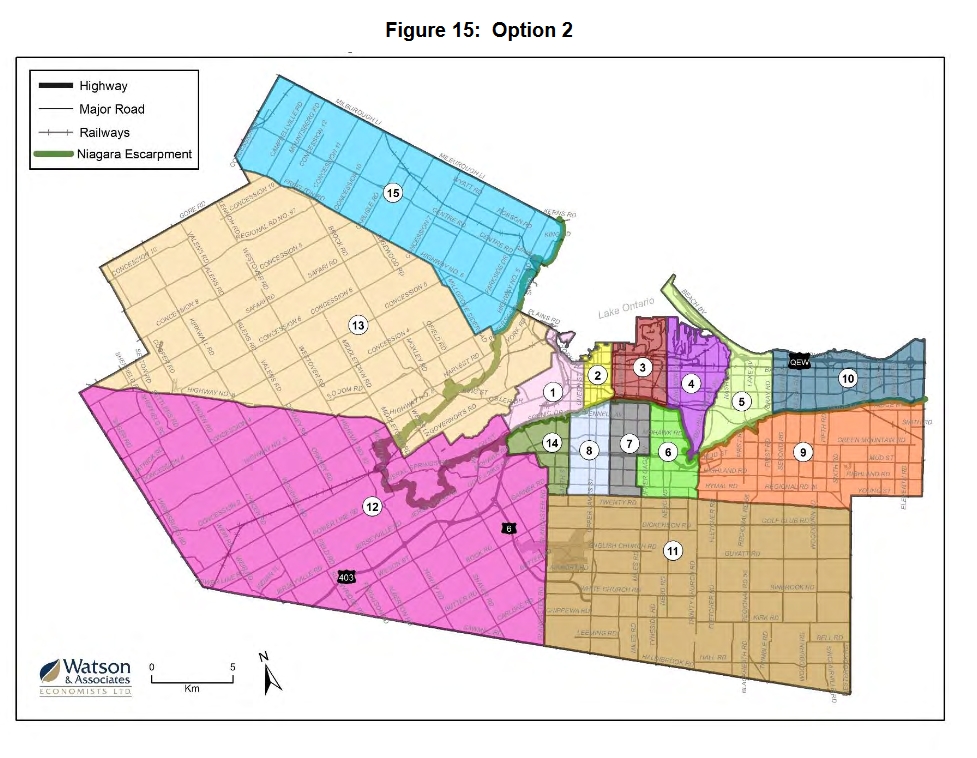 Hamilton's new ward boundaries as imposed by the Ontario Municipal Board

Hamilton City Councillors will lock the public out of a Special Council GIC on Monday when they debate if they’ll launch a Divisional Court challenge against the Ontario Municipal Board’s decision to impose ward boundaries created by professional experts instead of boundaries Councillors drew themselves.

Postscript: Council voted 8-7 to not appeal the OMB decision during their December 18, 2017 Special Council meeting on the matter.

Council is using its privilege under the Municipal Act to go into closed session citing the OMB ruling as a legal matter.
If Council chooses to file a Divisional Court challenge against the OMB ruling, they must do so as a judicial review.
The standard for judicial review is reasonableness not correctness, the Dunsmuir Test (after the 2008 Supreme Court of Canada decision), and deference to specialized tribunals and bodies.

In short, the Court does not substitute its judgement in place of a specialized body such as the OMB. The Court is to review the decision of the OMB to determine if the ruling is reasonable.
In addition to the normal deference the Court is to give to the OMB as a specialized body, the deference is enhanced by the presiding OMB member’s possession of specialized knowledge within both the subject matter as the holder of a Doctoral degree in Urban and Regional Planning, and knowledge of the procedures of the OMB as the Executive Chair of the Environment and Land Tribunals Ontario.
Executive Chair Dr. Bruce Krushelnicki holds a a PhD in Urban and Regional Planning from the University of Waterloo, a Master of Urban and Regional Planning from Queen’s University and a Bachelor of Arts degree from Brock University.
In the Dunsmuir decision, the Supreme Court of Canada wrote at length about the need for judges to not substitute their own thinking in place of subject matter experts practicing in their specialized fields of adjudication.
It’s hard to fathom any Superior Court judge who would agree with any claim that Dr. Krushelnicki’s decision making is not grounded in knowledge of the subject matter, and that it is not reasonable.

The decision issued Tuesday is 41 pages long with 178 paragraphs, providing great detail on the Board’s reasons for decision.
Dr. Krushelnicki, with OMB Member Paula Boutis concurring, clearly articulates the issues put in front of the Board by all parties.
The decision shows careful consideration of the City’s arguments, and clear articulation of why the Board ultimately ruled in favour of the Wards produced by Watson and Associates as Option 2 of the Final (Amended) report.
The decision is reasonable, reasoned, and the decision to adopt is well explained.
Not only is the decision reasonable; the OMB itself showed deference towards the subject matter expertise of Watson and Associates. The OMB choose – without modification – one of the options produced in Watson and Associates 135 page report.

City Must Implement Wards Pending Appeal, Unless They Get An Emergency Stay

There is some concern that if Council appeals they will be able to delay implementation of the ward boundaries past the October 2018 municipal election.
The appeal isn’t a stay, the City Clerk is required by the Municipal Act to immediately begin preparation for the municipal election using the new ward boundaries.
Council would need to seek an emergency injunction seeking a stay against the OMB order. In order to gain a rare injunction, the Council must meet the test articulated in RJR — MacDonald Inc. v. Canada (Attorney General) [1994] 1 SCR 311.
There is a three part test:

Council’s appeal will fail on the first test – the Courts have already ruled in the OMB’s favour in similar previous cases.
While Council may feel they are suffering “irreparable harm” from new ward boundaries that don’t favour their incumbency, the Courts will look at the interests of the Corporation of the City of Hamilton. The Corporation suffers no “irreparable harm” from preparing for an election under the wards.
The undermining of the Ontario Municipal Board’s authority under the Municipal Act would be significant if the Courts were to issue an emergency injunction. In effect, an injunction will prevent the implementation of the Board’s order until 2022, and in the meanwhile, the next Council would render the order null by starting a new Ward Boundary Review process.

When Will an Appeal be Heard?

The next Hamilton Division Court sitting is the week of February 5 to 9. The City could seek a hearing in Toronto at Osgoode Hall, the Divisional Court conducts hearings year-round in Toronto.