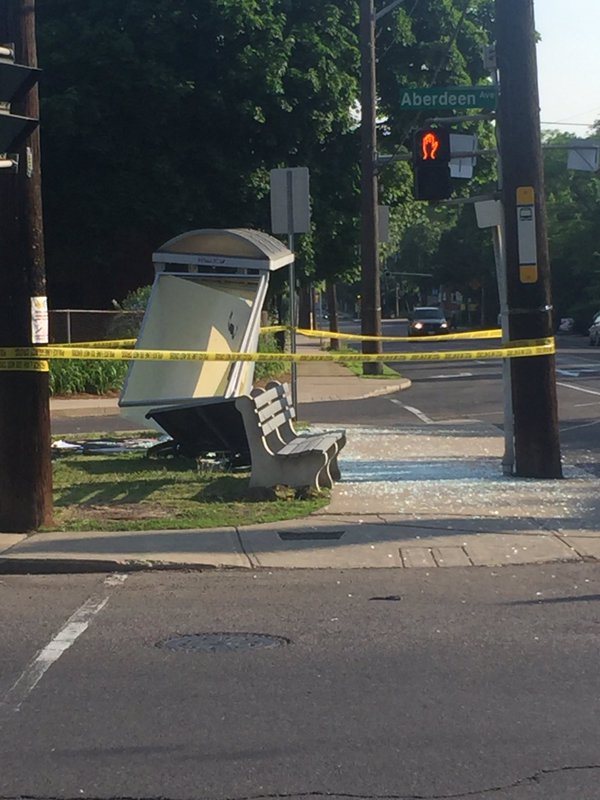 In May 2016, a vehicle struck and destroyed the bus shelter at Queen and Aberdeen.

Ward 8 Councillor Terry Whitehead has posted a notice of motion to change the speed limit on Queen Street south of King to 40 km/h. The current speed limit is 50 km/h.

WHEREAS, off peak speeds on Queen Street, at the base of Beckett Hill in Wards 1 and 2, have been recorded at a maximum of speed of 96 km/h ; and,

WHEREAS, the bus shelter at the corner of Aberdeen Avenue and Queen Street has been completely obliterated due to high speed traffic collisions two times in the last four years ;

WHEREAS, the bottom of the Kenilworth Access, there are residential homes all along the east and west sides of Queen Street; and,

WHEREAS, Kenilworth Avenue South has a maximum speed limit of 40km /h from the base of the access north to Main Street; and,

WHEREAS, Traffic Engineering staff do not support the speed limit reduction on Queen Street South (at the base of the Beckett Hill) to 40 km/h and are requesting direction from Council to institute this change;

THEREFORE BE IT RESOLVED:

(a) That staff be directed to take the required steps to reduce the speed limit to 40 km/hour on Queen Street from Amelia Street to King Street; and,

(b) That funding for signage for the speed limit reduction, as outlined above, be taken from the Red Light Camera Fund at an upwards cost of $5,000 ; and,

(c) That the by-law required to enact the speed limit reduction on Queen Street (between Amelia and King) , be prepared.