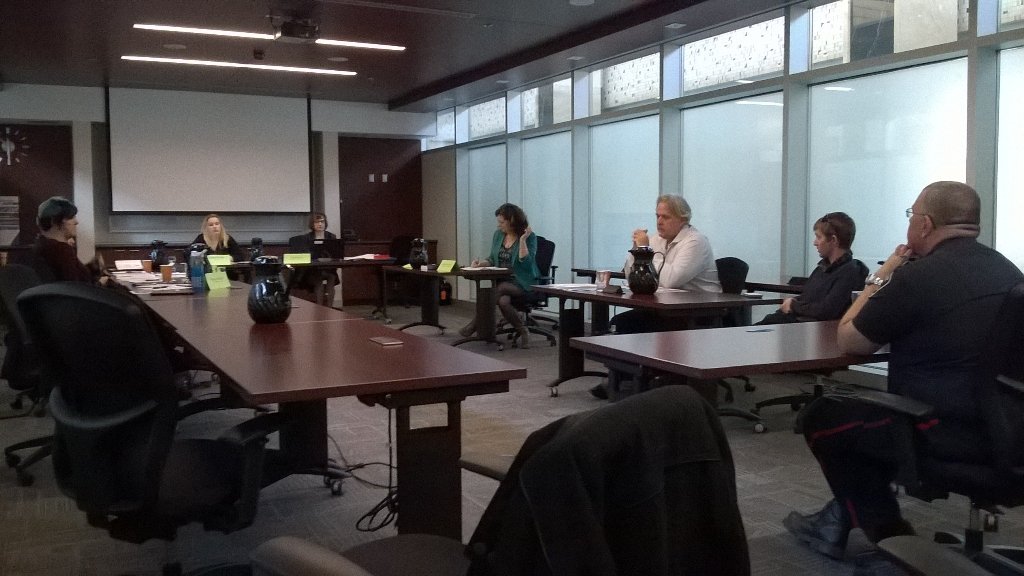 Just another day at Hamilton City Hall…
The Public Record was ordered to leave a public meeting of the Property Standards Committee today after the City Hall objected to the use of Twitter in the public gallery.
The City says the use of a “electronic device” by a member of the public to post to Twitter constitutes “broadcasting” and is forbidden under new rules. The rules are not publicly available on the City website.
These are the tweets the City Manager’s Office says constitute “disruptive behaviour”:

Robert Miles is a public figure in Hamilton, a Realtor and manager for one of largest property owners in the downtown. The Gore Buildings are located along the main downtown strip of the City, and are of significant public interest.
Coverage of this public meeting is clearly in the public interest, and protected journalistic activity under the Charter of Rights and Freedoms.

Hamilton City Clerk Rose Caterini, who directly reports to City Manager Chris Murray, implemented new rules for various committees at City Hall to address Council concerns regarding “eavesdropping” during public meeting.
By “eavesdropping”, the City is referring to the recording of public proceedings and posting of full videos of those proceedings.
The new rules state “broadcasting” is only allowed for “the purposes of education or news dissemination”. The rules do not define “broadcasting” or what is “education or news dissemination”.
Read the draft policy for this committee (PDF) – . The City has now posted the policy on its website.
On February 25, 2015, City Council voted 13-2 to receive – and hence endorse – the Integrity Commissioner Earl Basse’s report on the incident involving Councillor Lloyd Ferguson [PDF], in which Basse repeated a claim by Ferguson that TPR engaged in “eavesdropping”. Since then, staff have engaged in a pattern of obstruction against TPR. On May 20, 2015, Council reportedly voted in camera to further sanction TPR for “RSS hacking” by linking to the City of Hamilton’s RSS feed of public agendas in violation of the City’s website terms of use that forbid linking to public documents without the written permission of Council.
City Councillors and the Mayor have taken to calling The Public Record a fake news site.
As I’m no longer media, City Council takes the position that my use of Twitter is “broadcasting” and not “education or news dissemination”.
Here’s the City’s statement on the new rules from August 2016 (and yes, the City Manager actually issues official statements with that font):

The City implemented the new rules shortly after the Ontario Ombudsman ruled a secret meeting of the Election Compliance Audit Committee to be illegal – after I caught the illegal meeting. (City Council is challenging Ombudsman oversight in court, the case will cost over $10,000, at a time of budget crisis, this is a spending priority for Council.)
It was also shortly after the Divisional Court ruled that The Public Record video of another Election Compliance Audit Committee could be entered as evidence in a court proceeding and may supercede Council’s version of events in the minutes where they conflict.

The Committee met today debate property standards bylaw orders for 1 St. James Place, and the Gore buildings.
The meeting was scheduled at the same time as a Council meeting on the City’s proposed Transgender and Gender Non-Conforming Policy.
I was in Council Chambers for the beginning of the Council meeting, and walked over to the public committee room for Property Standards around 10:25 a.m., to grab a copy of the agenda (the City does not post public committee agendas to its website).
As I entered, the developer’s agent was making good points about the absurdity of the City requesting he install plywood to cover upper level windows when Council has approved the demolition of the building.
As I was filming Council, my camera remained in the other room – Council Chambers. I came into the public meeting room without any gear, I was not even wearing a jacket to hide anything. I only had my cellphone in hand.

City Reacts to My Presence at Public Meeting

As I sat down in the public gallery, the Clerk assigned to the Committee by the City Manager’s Office took note of my arrival.
I began tweeting. The City Manager’s communications team keeps close tabs on my movements at City Hall, and within moments of my tweeting, the Clerk stopped the meeting.
The City Manager’s solicitor in the room demanded to know if I was engaged in “broadcasting” and “recording” with any devices not visible to the committee.
I refused to answer initial question. The demand was repeated.
I responded, while remaining seating “I’m engaged in journalistic activity which is protected by Section 2(b) of the Charter as Freedom of Expression” and that “I will not be entertaining your questions because City Council does not authority to stop my journalistic activities protected by the Charter”.
The Clerk informed me that I had to request permission at the beginning of the meeting, and I was in violation of City policy because I arrived late – disrupting the meeting.
Putting aside, two meetings starting at the same time, Council is particularly annoyed about recording votes and attendance at meetings, less than a third of City Hall meetings start on time due to a lack of quorum as Councillors usually arrive late. One Councillor recently spent hours ranting on Twitter after I noted his arrival times at meetings during one day.
The City Manager’s Office stopped the meeting due to my “disruptive behaviour”, emptied the room, and the Committee went into closed session to deal with the “disruption”.
I returned to the Council Chamber to grab my notebook, and to process two video clips of the important discussion occurring about the City’s Transgender Policy.
After about 20 minutes later, I returned to the meeting which had resumed in public session.
Upon my sitting down, the meeting immediately stopped, and the City Manager’s Office informed me that I was to power down my cellphone, and remove the battery, as the use of Twitter was “broadcasting” to the Internet.
I continued tweeting, ignoring the City Manager’s solicitor’s demands for me to turn off all electronic devices and to confirm I had done so.
The City Manager’s solicitor then advised the Committee they had the right to demand my removal, which the Committee did as suggested.
At which point, I was told that I was “disruptive” to the meeting and was ordered to leave the room, which is enacting The Trespass to Property Act.
I refused to move from the public gallery. At which point, the City’s solicitor advised the Committee to adjourn the meeting to be rescheduled for a future date.
I told the City’s solicitor that I would voluntarily comply provided the City issue a written notice of removal. The City Manager’s clerk stated they would, and I left. My decision was based upon not wishing to see the second hearing cancelled, and the individual incur further legal fees due to the City’s actions.
The City sent me the following statement this afternoon:

Mr. Coleman,
I have consulted with the new City Solicitor, Nicole Auty. She was advised by her staff that the Committee did hear from an appellant who objected to being broadcasted and the Committee accepted his argument as meeting the criteria in the Broadcast policy.  At which point I understand you were asked not to broadcast the meeting, but you were welcome to remain. I understand that staff explained the decision on the matter will reflect this – and will be shared with you. Staff also advised that you did not acknowledge the ruling of the Committee Chair on the Broadcast policy pursuant to powers under the Statutory Powers and Procedure Act, and as a result you were asked to leave the meeting. I was also advised there was no reference to issuing a Notice of Trespass nor are you banned from the Property Standards Committee.
I hope this helps clarify, if you have any questions or points of clarity, please do let us know.
Thank you,
Andrea
Andrea McKinney
Director, Communications and Intergovernmental Affairs
City of Hamilton
Andrea.mckinney@hamitlon.ca

The City Manager has not released its definition of broadcasting, beyond that members of the public using Twitter are in violation of whatever the definition is.
The Property Standards Committee does not publicly post its decisions. Whatever rulings they made today will remain secret until minutes are published after their next meeting which will likely be on the same time as the May Council LRT meeting.
The City’s new City Solicitor started last week, arriving in Hamilton after leaving St. Catharines three months ago: City lawyer exits after IceDogs flap.