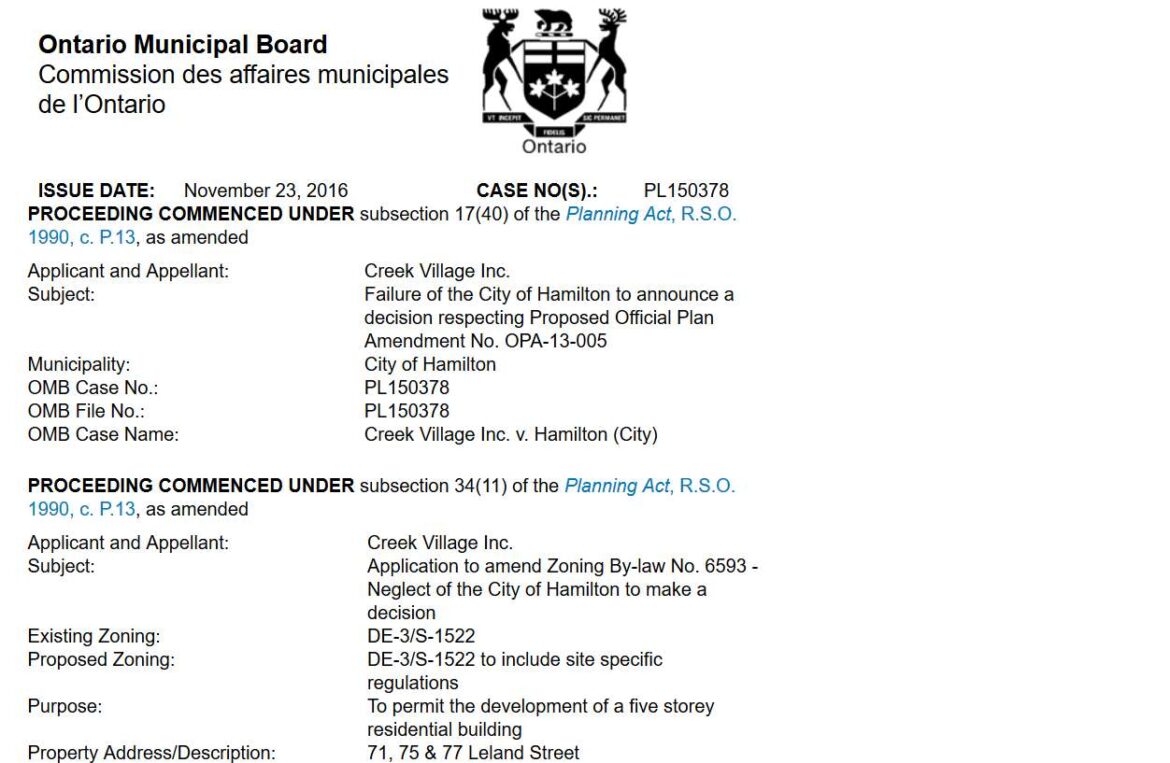 The Ontario Municipal Board has tossed Hamilton City Council’s opposition to a 5-storey 129-unit student-orientated multi-residential development near McMaster University in the Ainslie Wood neighbourhood at 71 – 77 Leland Street.
The land was previously used for light industrial and the existing industrial buildings will be demolished.
The developer, Creek Village Inc, appealed to the OMB after Council failed to make a decision within legislated timelines.
Councillor Aidan Johnson opposed the development, which City planning staff stated fulfilled the requirements of the Urban Hamilton Official Plan and recommended the approval of. Council hired outside planners to argue their case.
The OMB sided with the developer, writing:

This brownfield site affords an excellent opportunity to realize intensification and rather than penalizing this opportunity by reducing building height and/or unit density for the sake of a numeric reduction, the applications have demonstrated a capacity to comply with prevailing provincial and Official Plan policy and produce a residential, multi density use capable of achieving neighbourhood compatibility.

On November 9, 2016, Councillor Johnson was on The Public Record Radio Show and I specifically asked him about his opposition to this development, and in light of that opposition, where he felt students should live.
Take a listen to Johnson explaining that he believes purpose built student housing should be on Main Street West, and then former McMaster Dean of Students Dr. Phil Wood respond to Johnson by noting those who say Main West often opposed development on their corner of Main West:

(Download – 3:54 – 1.73mb MP3 file)
The OMB ruling does impose a holding provision on the development, the developer will need to improve water lines to the building for fire suppression purposes:

[T]he Board is amending the proposed rezoning by-law described in Attachment 1 to signal the imposition of a Holding (H) provision to ensure that the enactment of site plan control includes that “Required Fire Flow” is addressed by Creek to the satisfaction of the Senior Director of Growth Management. In accordance with Exhibit 6, the Holding provision will ensure that the required fire flow needs are addressed including the potential requirement that Creek may have to extend the watermain from Emerson Avenue to satisfy water flow needs related to emergency servicing.