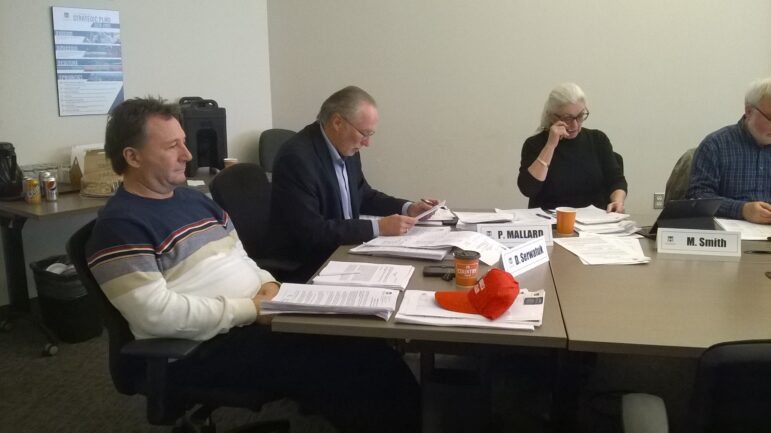 Dave Serwatuk, a member of the Committee of Adjustment, displays a MAGA hat during Thursday’s hearings

Like many of you, I wear many proverbial hats in the community. I’m proudly an engaged resident, an independent journalist, volunteer, and a few others things. (And depending who you ask, a few choice words)
Thursday, I spoke up because of an actual hat.
Dave Serwatuk, a quasi-judicial official, proudly displayed a Trump “Make America Great Again” hat while adjudicating matters during Thursday’s Committee of Adjustment hearings.
The Committee of Adjustment is a quasi-judicial body which makes decisions on planning variances, including variances needed to start businesses.
It is entirely inappropriate for any person adjudicating on quasi-judicial body to openly display any political paraphernalia.
The reason is simple, in their role as the state, quasi-judicial officials represent all of us and our common ideals of justice and fairness. They must be above the apprehension of bias. Displaying political messaging and paraphernalia creates the appearance of bias.
Myself, I worn two of my ‘hats’ – that of independent journalist covering Committee of Adjustment, and also as representative of the Beasley Neighbourhood Association on an application in our neighbourhood.
I noted Serwatuk’s display and explained its significance as a journalist. After nearly two hours of hearings, as others sat silent – only whispering about the hat -, I sat in front of the Committee representing the Beasley Neighbourhood Association.

Admittedly, I debated if I would say anything about the display.
I considered that I open myself to criticism that I was ‘making the news instead of reporting the news’. 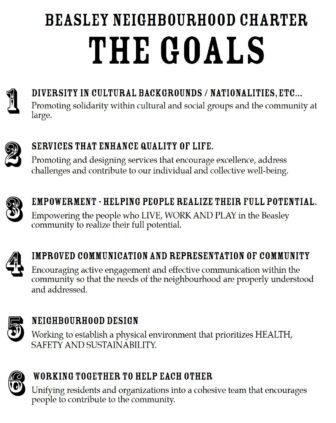 My fellow Beasley residents have entrusted me to speak on minor planning variances – by speaking to the hat, I was taking a position on behalf of the BNA.
Could I?
Yes, the Beasley Neighbourhood Charter’s first goal is “diversity in cultural backgrounds and nationalities”. I fulfilled my duty upholding our community values.
While I debated if I would speak up, I didn’t debate what was the right thing to do.
There are those in our community sincerely frightened and hurt by the statements made by Trump against Mexicans, immigrants, and Muslims.
It doesn’t matter what Serwatuk meant to convey by displaying the hat, what matters is how somebody will feel seeing that message displayed in a quasi-judicial hearing.
The Committee decides on people’s livelihoods. An immigrant – required to ask the Committee of Adjustment for a minor variance to open their new business – has their fate in that hands of this committee, how would they feel with that message in front of them?
The words of Trump during the presidential campaign – and the hatred he unleashed –  have no place in our society.
I stand with my fellow community members, silence is not an option.
The hearing item in Beasley was called. I sat at the table and I asked the Chair:
“Joey Coleman, Beasley Neighbourhood Association. Mr. Chair, is this not a quasi-judicial proceeding under the Planning Act?”
The Chair answered “yes”.
“Could you explain why a political item is being displayed by a member of this body during hearings today?”
The Chair stated he would let the member explained.
Serwatuk stated “I’m a citizen” in explanation.
“Sir, yes you are a citizen. You’re a quasi-judicial official at the present time, and you are here in that role.”
“The Beasley Neighbourhood is proud to be a multicultural community, and as a neighbourhood association, we are proud to support Hamilton being a sanctuary city.”
“Political displays have no place on this committee, the Beasley Neighbourhood Association stands proudly alongside all of our community members.”
Serwatuk declared a conflict of interest and left the room.
Serwatuk says his display was meaningless, that he didn’t know about the incident with Justice Bernd Zabel, and that he had received the hat as a gift from this brother.
He displayed the hat for over two hours before the Beasley Neighbourhood Association objected to a political display at a quasi-judicial body.

It’s a damning indictment of City Hall culture that nobody in power spoke up, and applicants felt they couldn’t.

0 thoughts on “Coleman: Why I Spoke Up About The Trump Hat”