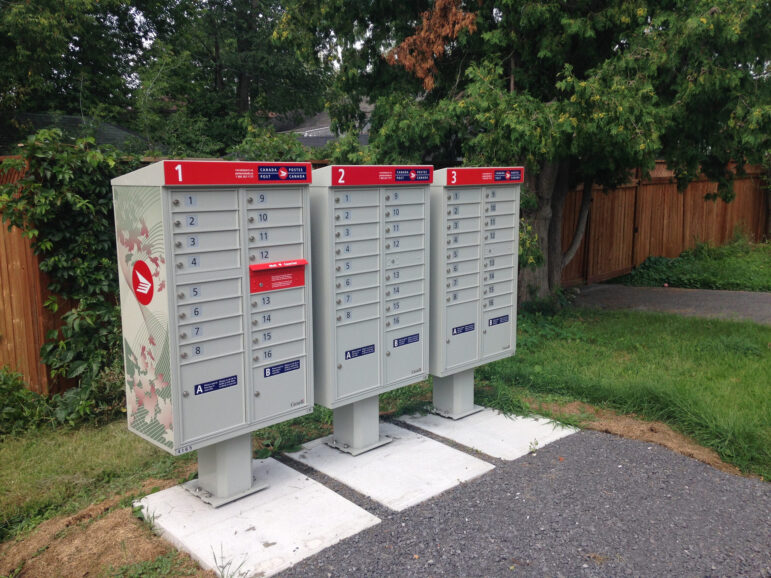 Hamilton’s battle against Canada Post is looking a bit more hopeless after a ruling last week by the Supreme Court of Canada (SCC) in a case of federal jurisdiction and a municipality’s attempt to regulate the location of a cellphone tower.
In Rogers Communications Inc. v. Châteauguay (City) 2016 SCC 23, the court found a municipality cannot expropriate land to prevent the installation of a radio communications (cellphone) tower. The court found Châteauguay’s notice of reserve (expropriation) was ultra vires (outside the power of the city) and a violation of the doctrine of inter-jurisdictional immunity (IJI).
Both ultra vires and IJI are reasons that Hamilton’s By-Law 15-091 (community mailboxes bylaw) was declared void by the Ontario Superior Court of Justice (ONSC) in a 2015 ruling which Hamilton city council is appealing to the Ontario Court of Appeal (OCA).
The SCC ruled that locations of cellphone towers is “at the core of the federal power over radiocommunication” [para 66] and “the notice of a reserve compromised the orderly development and efficient operation of radiocommunication and impaired the core of the federal power over radiocommunication in Canada”. [para 67]
Substitute postal service for radiocommunication and you have the clear case law the OCA will follow when making its ruling in Hamilton appeal.
The lawyer who won this case at the Supreme Court of Canada, John Laskin, is also representing Canada Post against the City of Hamilton and won the 2015 ONSC hearing in Hamilton.
With the SCC ruling going so strongly in favour of the doctrine of inter-jurisdictional immunity, it does not look like Hamilton will win anything on appeal, except a very large legal bill at the end.

Professional Analysis of the SCC Ruling

Laskin’s firm Torys LLP posted a brief summary on their website.
University of Calgary law professor Nigel Bankes write an informative analysis of the ruling with an eye to its application for pipelines in conflict with municipal and provincial jurisdictions.

In this decision the Supreme Court of Canada (unanimous in the result) concluded that the actions of the City of Châteauguay in creating a reserve as to certain real property were directed at frustrating Rogers’ efforts to install an antenna system on property located within the City and were therefore unconstitutional as a measure dealing with the siting of telecommunications infrastructure. The majority found that Châteauguay’s notice of reserve was ultra vires (but also went on to offer an analysis that would have rendered the reserve inapplicable on the basis of the doctrine of interjurisdictional immunity (IJI)). The minority (Justice Gascon) preferred to find for Rogers solely on the basis of IJI.

This is important for Canada Post v. City of Hamilton – the Supreme Court intentionally ruled on IJI, providing clear direction and case law which will apply to Hamilton’s appeal.

In order to get that approval, a licensee such as Rogers must engage in a consultation process prescribed by Industry Canada which requires the licensee to consult both the public and the relevant land use authority (LUA), in this case Châteauguay. While the goal of the consultation with the LUA is to reach an understanding or agreement, the Minister retains the right to make a final decision in the event of an impasse.

In the Hamilton case, the city stopped communicating with Canada Post and ordered CP to apply for permits at $200 each application, and imposed a 120-day moratorium on new CMB installations only to begin upon the payment of 500 applications fees – $100,000 – by Canada Post to the City of Hamilton.
The Supreme Court clearly states that federal power cannot be frustrated or interfered with unreasonably, and the Superior Court ruling was clear – Hamilton’s bylaw was designed to frustrate Canada Post and the exercise of federal power.
Professor Bankes explains the SCC found that while Châteauguay claimed its action were for the protection of the health and well-being of residents, the city’s actions were “colourable” by a goal to prevent the installation of the tower.
Sound familiar? The City of Hamilton is claiming the same with CMBs.
Bankes quotes paragraph 71 of the ruling in its entirety, and its importance to the doctrine of IJI:

The majority concluded that the notice of reserve “seriously and significantly impaired the core of the federal power over radiocommunication and that this notice served on Rogers was therefore inapplicable by reason of the doctrine of interjurisdictional immunity.” (at para 72) The evidence in support of this was as follows:

[71] In the case at bar, the service of the notice of a reserve prevented Rogers from constructing its antenna system on the property at 411 Boulevard Saint?Francis for two successive two?year periods, and there was no alternative solution to which it could have turned on short notice. Once the resolution authorizing the service of the notice of a reserve had been adopted, Châteauguay’s offer meant that Rogers would have to wait either until the end of the expropriation proceedings with regard to the property at 50 Boulevard Industriel or for a period of approximately seven months before it would be able to construct its installation on the property at 411 Boulevard Saint?Francis. In these circumstances, Rogers was unable to meet its obligation to serve the geographic area in question as required by its spectrum licence. In this sense, the notice of a reserve compromised the orderly development and efficient operation of radiocommunication and impaired the core of the federal power over radiocommunication in Canada.

The passage is worth quoting in its entirety, since it confirms that the IJI test is not “sterilizing” or “paralyzing” and that the more qualified test of impairment may be met by measures which serve to delay, as well as measures that completely frustrate, the attainment of the goal or objective sanctioned by the federal power.

It’s pretty clear Hamilton’s Hail Mary legal appeal isn’t going to succeed, so why continue?
Council made its opposition to the end of door-to-door delivery clear. There is a new federal government, which paused CMB conversions and is conducting a full review of Canada Post – a review which could restore door-to-door delivery.
The political purpose of the bylaw is served.

City council engaged in a decade-plus legal battle with the federal government claiming the feds illegally and improperly delayed the construction of the Red Hill Valley Parkway.
The suit was criticized by Justice P.B. Hambly in a scathing 2012 ruling as experimental litigation:

Counsel for the City has acted as if it had a client with inexhaustible resources to finance endless experimental litigation and that it could conduct litigation against the federal government with impunity. [Para 29]

Council eventually dropped its suit, but not before the city’s legal bill reached $3,150,000.
Is it time for city council to stand down before this legal adventure reaches into the millions as well?