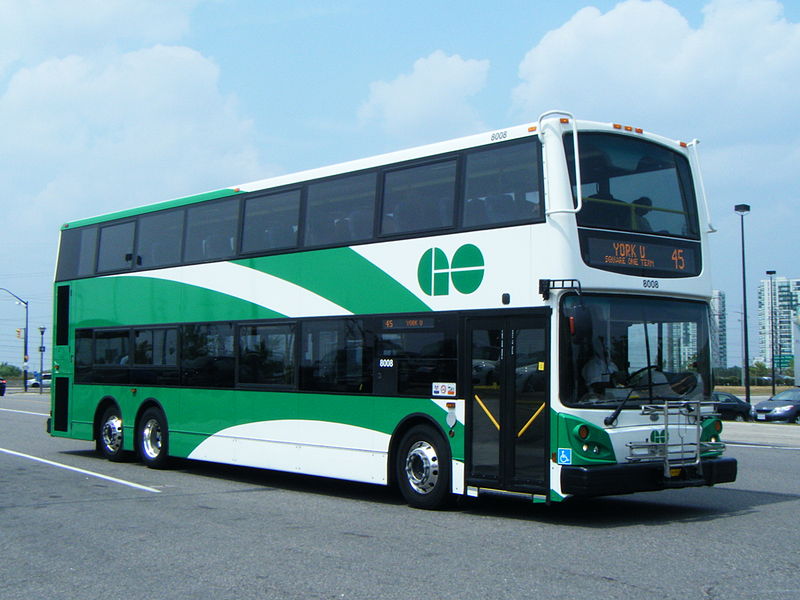 Partridge passed a motion during the December 9, 2015 Council meeting asking the Province to have GO Transit operate an inner-city route from Waterdown to McMaster University and “other stops within in the city of Hamilton”.

Partridge’s motion states that since GO is storing buses overnight in Waterdown, those buses can be used for the service.

Partridge is a smart councillor and a shrewd politician. She must know that her motion, while technically possible, is fatally flawed and does nothing to advance the cause it purports to support.

The motion doesn’t speak to costs. Why the Councillor believes GO Transit should provide local transit service, which the municipality itself cut in the 1990s and isn’t willing to offer on the local tax assessment, isn’t articulated in the motion.

Without a doubt, Waterdown suffers from a severe public transit deficit. Waterdown’s population has grown extensively since Regional Council cancelled bus service between Downtown Waterdown and Downtown Hamilton in the mid-90s.

Travel to Downtown Hamilton can be done on a single-fare with a transfer onto Burlington Transit – it’s possible but isn’t even close to feasible.

The lack of direct bus service between Waterdown and Downtown Hamilton is a recent phenomenon caused by a series of events spanning just over 15 years, resulting in the lack of service for the past six years.

Local historian Tom Luton is quoted saying that Canada Coach Lines started service between Hamilton and Guelph as early as the 1930s. This Guelph route provided service to Waterdown and the hamlets of Flamborough.
Canada Coach Lines purchased the Hamilton Street Railway from Ontario Hydro in 1946.

The City of Hamilton purchased Canada Coach Lines in 1960, the Region of Hamilton-Wentworth took ownership in 1977. (The Region was formed in 1974)

From 1977 to 1993, the Region of Hamilton-Wentworth operated both the HSR and CCL with CCL offering an extensive network of destinations across Southwestern Ontario, including service to Guelph via Waterdown. (See the destination signs on these pages of CCL bus pictures)

On July 30, 1993, The Hamilton Spectator reports the Region started a HSR 18-Waterdown route to Aldershot GO with a single daily trip to Downtown Hamilton.
An HSR spokesperson is quoted on January 31, 1994 stating the bus averaged only 256 riders per month.

Interest in the route by TheSpec matched ridership – nearly none. In mid-March, the paper ran a short story that noted the route was a one-year pilot at the cost of $65,000.

A letter to the editor in TheSpec on November 7, 1994, states the service was cancelled at the end of October 1994. There were no stories about the cancellation.

There was some debate at Regional Council about starting a new Waterdown service in 1996, but it died on costs and a proposal to levy transit charges across the Region – what we would today call ending area-rating.

From 1994 to 2009, Waterdown residents continued to use the Coach Canada’s Hamilton to Guelph service.

The service operated four trips per day and could provide a reasonable means of getting to and from McMaster or Downtown Hamilton during rush hour. (On Friday and Sunday, Coach Canada operated extra non-stop service that didn’t service Flamborough.)

The pricing was approximately $5 per trip and the service was reliable. There were student and bulk ticket discounts. I took this bus often to visit friends in Guelph during my university days. If my memory is correct, with the bulk ticket and student discounts, the price to Guelph was about $6-7 each way.

At the start of the academic year in 2007, GO Transit launched bus service between Square One in Mississauga and the University of Guelph. While this may not seem important to the Hamilton to Guelph service, it caused a shift in ridership due to cost and convenience.

Many of the Hamilton to Guelph riders were students. Prior to the GO service, there were only two buses options into the GTA from Guelph – the Highway 6 service to Hamilton or Highway 401 service into Toronto proper. Students going home to the West GTA would take the Hamilton bus and be picked up – the new Mississauga service provided a more convenient pick up point.

The Hamilton to Guelph bus serviced all the towns and villages of Flamborough. It felt like a milk run, and it was a milk run.

With only four Coach Canada trips per day, the GO ride of McMaster-Square One-Guelph was a feasible alternative. Add in that GO’s student rate was slightly cheaper and some students made the shift.

Spacing Magazine wrote about the cancellation and it’s direct relation to the expansion of GO bus services outside of the GTHA. Last year (2014) Coach Canada ended Hamilton to Niagara service.

The Flaws of the Partridge Plan

Provincial legislation is clear: Section 11.11 of the City of Hamilton Act gives City Council responsibility and power for local transit. Section 8.1 of the Metrolinx Act makes clear that GO Transit is a regional transit system and not a local transit system.

While 8.1 of the Metrolinx Act says GO Transit may “subject to the approval of the Minister, operate local transit systems under agreements with municipalities within and outside the regional transportation area”, this clause must be read to be that GO Transit operated local transit will be funded by the local tax levy.

Hamilton is a single-tier municipality. For provincial purposes, the operation of a Waterdown to Downtown Hamilton bus route is little different that the HSR 1-King route operating from Eastgate to McMaster – it does not cross any municipal boundary.

Even within a multiple tier municipality, GO Transit does not provide local transportation. Durham Transit is required to connect its own lower-tier municipalities. The GO service in Durham happens to make multiple stops in the region, but all of the lines are designed to link to regional destinations.

For the province to step in and operate local bus service for Waterdown would invite other municipalities – with stronger arguments such as Niagara – to offload local public transportation to GO Transit.

The buses in this facility are, unfortunately, not surplus or new.

The concept of the buses providing rush hour service while travelling to/from the facility isn’t feasible either. These are buses leave the garage prior to rush hour in the morning, and don’t return until after rush hour is complete in the evening.

They are simply not available when people need to connect from Waterdown to McMaster and Downtown.

There’s also the question of who pays for the service? If GO were to provide the service, would it be most cost-effective than HSR service? How will it be put onto the tax bill?

Why Not The HSR?

This brings us to the big question – if Waterdown needs a connection to McMaster as much as Councillor Partridge believes, why isn’t she moving to have HSR service implemented?

There are many issues to consider.

Is it that local taxpayers in Waterdown are not willing to bare the cost of a tax increase for the service? After-all, that’s what killed Transcab to Binbrook.

Is it the stigma attached to the HSR? Afterall, City Council views the HSR as a social service and not as a part of a healthy moving of economic activity and people.

On the tax base side, if that’s the reason Partridge isn’t moving forward with HSR service, then her GO Transit motion is disingenuous political posturing.

If its stigma, then we need to fix the HSR.

Councillors are left to run their wards as they see fit. If Partridge really wants transit to McMaster University, a motion to area-rate the cost to Ward 15 residents will enable it to happen.

Will Partridge address bus service between Waterdown and McMaster during the 2016 budget process?