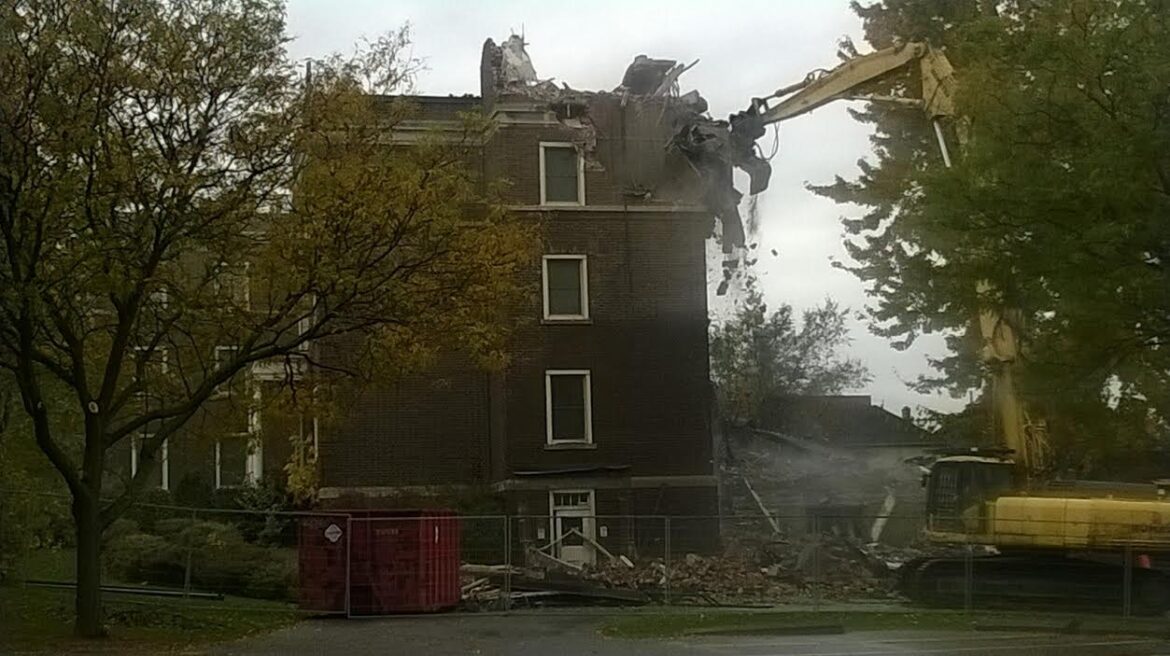 Demolition work at Mount St. Joseph during the afternoon of October 24, 2015.

The City’s Planning Division says there is no formal application for the redevelopment of the now-former Mount St. Joseph site at 354 King Street West.  Ann Lamanes, spokesperson for the Planning and Economic Development Department, confirmed by email in response to questions from The Public Record.

The City’s Chief Planner Robichaud said, though Lamanes, that the site is subject to the  Interim Control By-Law passed by Council this month along the LRT corridor and the existing parking on the property cannot be expanded onto the demolished building footprint.

The ICBL prevents the expansion of low-density uses which will be incompatible with LRT economic development plans.

In a follow-up email, The Public Record asked if there are any loopholes similar to those used to create the “legal non-conforming” parking lot to the north of this site on Queen Street North in 2012. Robichaud confirmed there are no loopholes.

The owner of the building, Darko Vranich’s King West Crossing Inc., began demolition of the building on Saturday – much to the surprise of the local neighbourhood association.

The demolition came only weeks prior to the expiry of a demolition permit issued for the site in November 2014.

For some reasons, which City staff never explained, the application was not properly reported to the Hamilton Municipal Heritage Committee on October 16, 2014.

As a result, the permit was issued without any public knowledge during the Council election recess and only came to public attention on November 12, 2014. Demolition permits cannot be revoked, leaving the building without protection and the neighbourhood outraged.

The building was only listed as being of heritage interest and was not on the Heritage Interest Registry. Being outside of the Downtown Core Boundary, which ends at Queen Street, the building was not protected from demolition.

Floated Development Prior to Demolition

During the Municipal Heritage Committee meeting on January 22, 2015, a rendering of a proposal for two 22-storey condominium buildings on the site with distributed to the committee. One of the proposed buildings integrated the now-demolished building at its base. 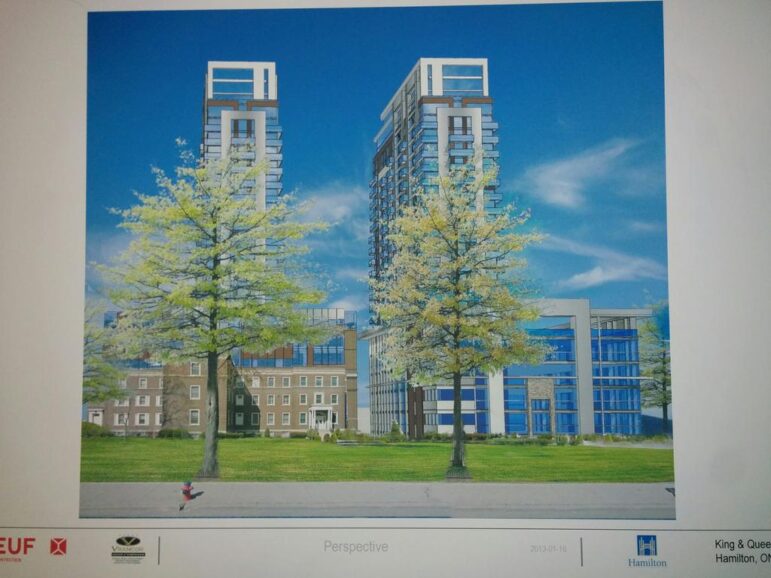 This proposal was not submitted formally to the City and was distributed as part of efforts by the Heritage Committee, which includes Ward 1 Councillor Aidan Johnson as a member, to find a solution to fund the preservation of the nearly 80-year-old building.

The demolition will significantly decrease property taxes on the site. The change in property taxes will be reflected in either the Winter or Spring quarterly tax adjustment report to Council.

The Public Record will monitor for this update and for any formal applications to redevelop the site.