(This is a bit of a long read, I started with the thought of writing about the localism of East Hamilton and where exactly does East Hamilton start. It became this 2500 word piece on Hamilton’s localisms city-wide and how I see them. I hope you enjoy and share your feelings – especially the strong ones – below) 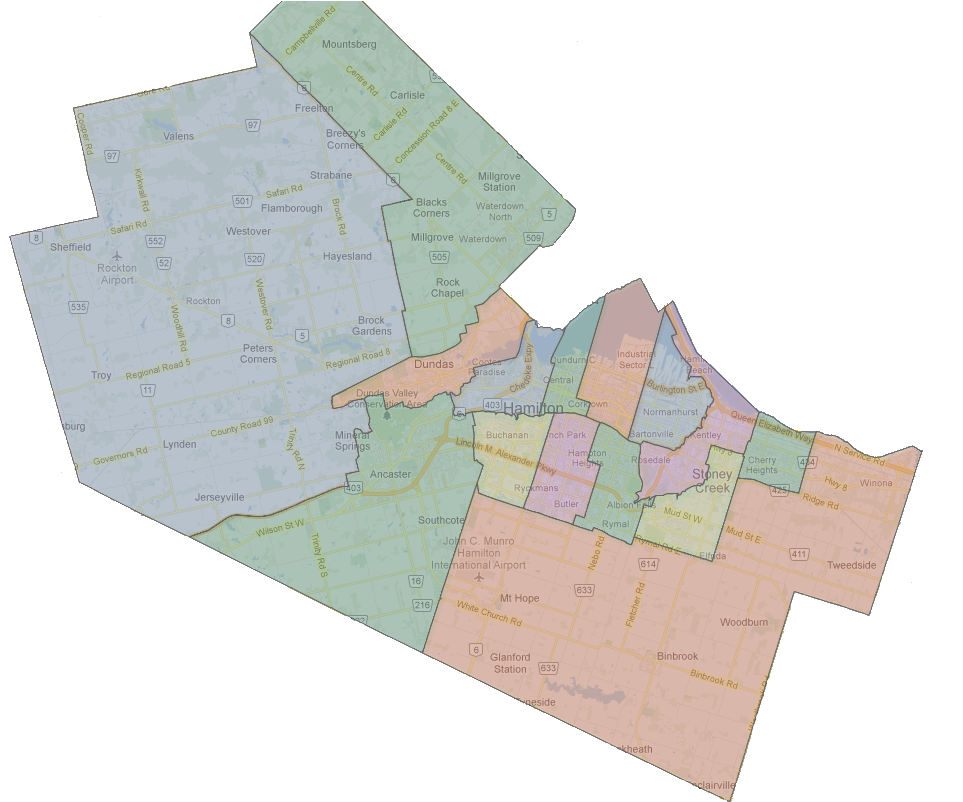 As a Hamiltonian, I’m often surprised when Barton and Sanford is “north end”, City staff use “north end” to describe the industrial sector between Sherman and Woodward, apartment buildings along Queenston Road in Stoney Creek are “east end”, the stadium is “east end”, Westdale is called Hamilton’s “west end”, Parkdale and Queenston is called “Stoney Creek”.
With Hamilton being a large amalgamated city, even the terminology used for the lower city is being forced to change.
Arguably, the entire lower city is now “North Hamilton”, especially with the rapid expansion of Hamilton south since the opening of the Lincoln Alexander Parkway, growth in Upper Stoney Creek and Glanbrook, and the inclusion of agricultural lands to the south of the urban boundary.
As a local journalist who is a Hamiltonian, I have strong opinions upon when these terms should be used.
People who live in these communities – especially those along boundaries that are not exactly clear and even when they boundaries are clear – have stronger opinions still.
Those opinions will differ from mine and official political boundaries.
What do these terms mean? What are the hidden and not so hidden meanings? 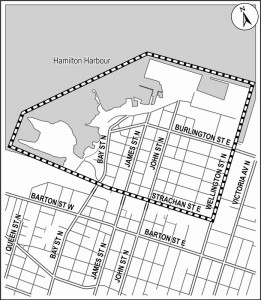 North End is a most often used to indicate – second hand – that a neighbourhood is poor or crime ridden.
It’s usually dropped when referring to Hamilton’s true North End in a positive story.
When writing about the booming real estate of the neighbourhood that is geographically defined as the North End (North of the CN mainline, west of Wellington), the term Hamilton’s waterfront is often used to clarify the use of North End for geographical purposes.
This second-hand negative meaning is why Barton and Sanford is “north end” in a crime story, or “north end” to refer to Jimmy Thompson pool within the context of the area being a lower income neighbourhood.
City staff will refer to pollution in Hamilton’s north end, or poverty in Hamilton’s north end when they are referring to neighbourhoods well outside of the traditional north end – even when the term was used commonly to refer to all residential areas north of the CN mainline tracks.
Those who grew up in the north end and found successful careers use the term to denote the adversity they’ve overcome and the character that was built growing up in a poor community where personal honour was the most important currency, since money was hard to come across.
I now use North End to refer solely to the neighbourhood, or for historical context for someone who grew up north of the CN mainline and west of Lottridge. (From my own experience growing up, I see the area along Beach Road to be very different than Keith neighbourhood of Wentworth North.)

East End is an interesting term to define both geographically and for social meaning.
Personally, I’ve decreased my use of the term in favour of using neighbourhood names, key landmarks, and intersections to place a story in East Hamilton.
To me, East End refers to the former “blue collar” culture of an area where steelworkers lived closer to the factory that provided plentiful good employment and the strong union culture that came from those neighbourhoods.
That culture is no longer homogeneous in any East Hamilton neighbourhood, and East Hamilton neighbourhood cultures I find are guided more by recent waves of immigration than social class.
I use “East Hamilton” for stories east of Gage Avenue, but mostly past Ottawa Street. I personally feel that Ottawa Street belongs to both East and Central Hamilton.
Ottawa Street also serves as the boundary between Wards 3 and 4, but I’ve never found ward boundaries to be useful for splitting geography in the Lower City.
Hamilton Police have a divisional boundary at Sherman Avenue, causing incidents at Sherman to sometimes be called East End.
I can’t quite define “East End” in my mind.
I could during my childhood when there was greenfield on the Hamilton side of the Stoney Creek border. Now, Hamilton and Stoney Creek’s border is a paper boundary for the most part. (More on this boundary below)
If there is an “East End”, surely its the area east of the Red Hill Valley?
However, I don’t hear people living north of Queenston Road from the Valley to Centennial Parkway (which I still call “Highway 20”) refer to themselves as “East End”.
South of Queenston, they don’t either.
South of King, the “Davis Creek” name is taking hold among those who identify with Hamilton and other parts of East Hamilton here identify themselves with Stoney Creek.
East of Highway 20, there is Riverdale. This neighbourhood is clear in its identity as Riverdale.
There is no area which I can clearly identify as “East End” today.

What is the east boundary of East Hamilton, when does it become Stoney Creek?
This is my favourite boundary because of how the political boundary is not disputed, but the localisms are.
I ran in Ward 5 for School Board Trustee in 2000, and this was the first time I realized just how strongly some residents feel about an affinity towards Stoney Creek – despite officially living in Hamilton.
The delivery area of The Stoney Creek News offers a good boundary of those living within the political boundary of Hamilton who identify as being in Stoney Creek.
I found when I was going door-to-door during the 2000 election, people living east of Quigley Road and south of Greenhill Avenue in the Vincent neighbourhood tend to lean towards saying they live in Stoney Creek. (see map below) 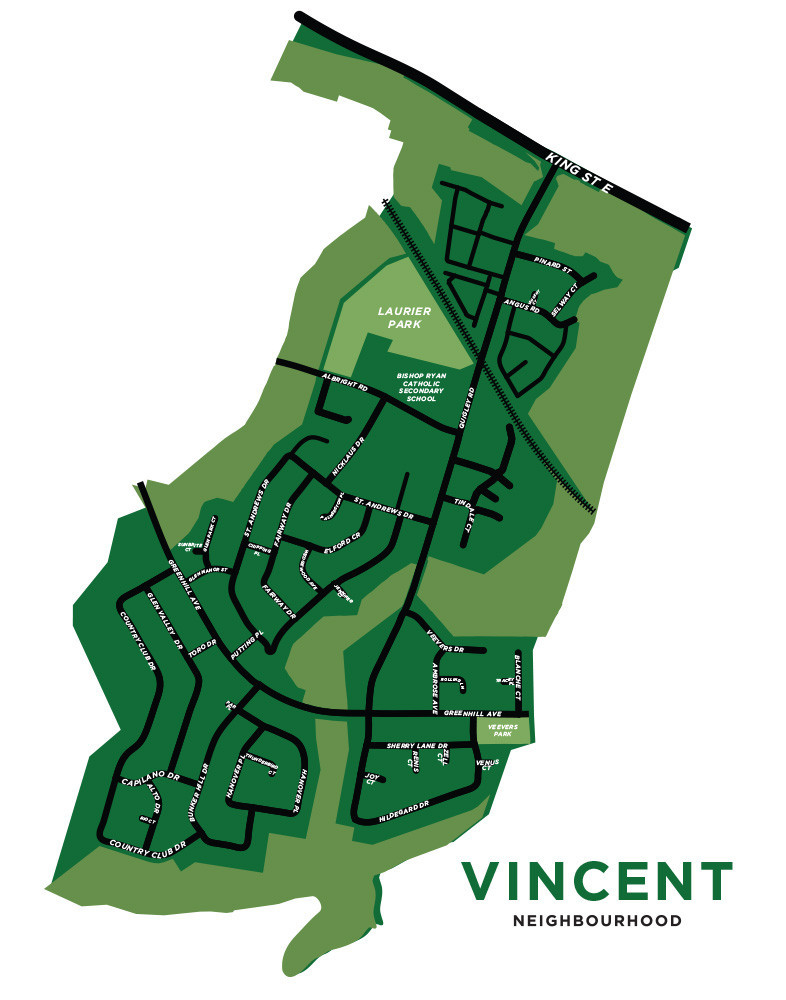 The developments east of Greenhill in the Gershome neighbourhood are mostly post-2000 era construction. (The last of that gap between East Hamilton and Stoney Creek that I knew growing up)
The homes that were in Gershome when I ran in 2000 identified more with Stoney Creek than Hamilton from my subjective experience.
East of Nash Road between Queenston and King is where many of my friends from Glendale Secondary School lived. All of them identified with Hamilton.
Going door to door, I didn’t encounter many people referring to themselves as being part of Stoney Creek in that neighbourhood as well..
I wonder if, much as the homes north of Queenston, this is because they are well connected by transit to Hamilton proper and most of the homes were built a few decades ago. 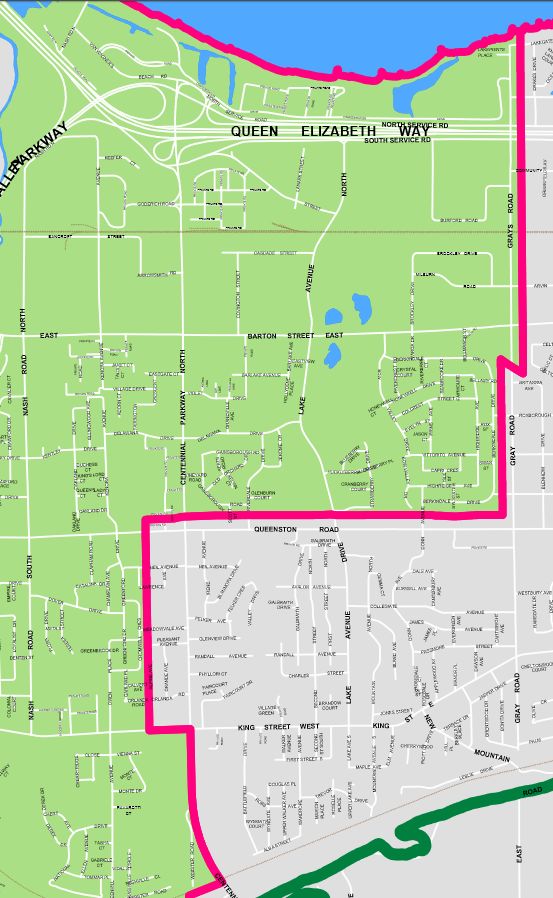 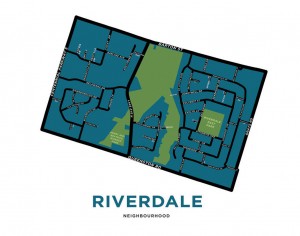 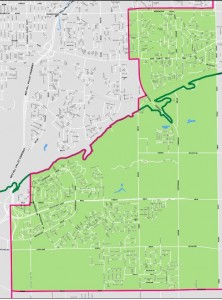 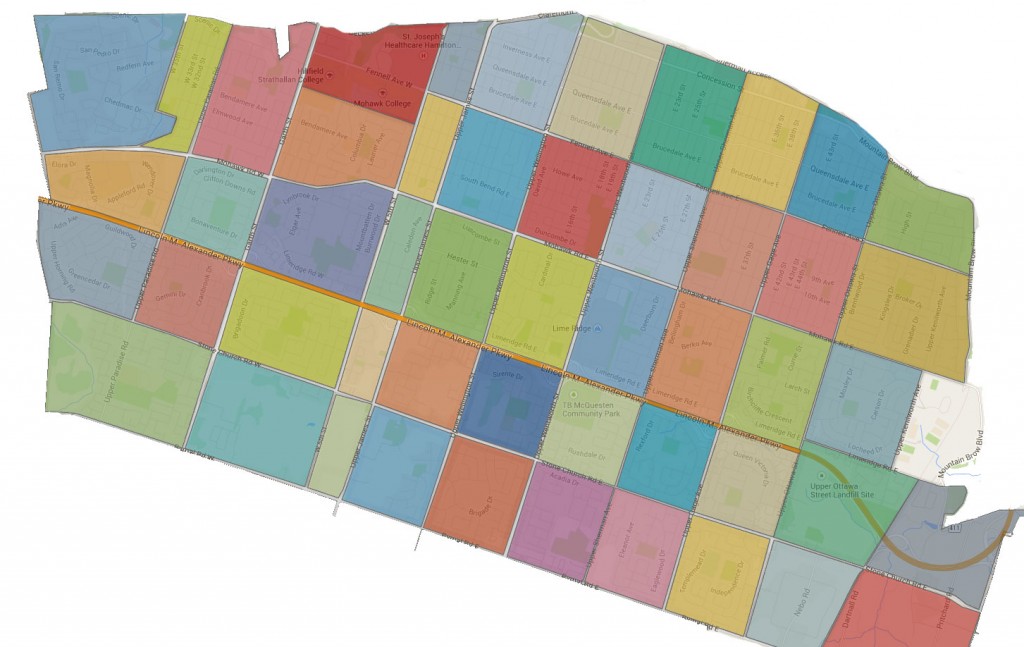 Today, the Mountain is fully developed with the exception of a few pockets in Ward 8 south of Stone Church Road. Stone Church Road and Rymal Road are both busy arteries and traffic on the Mountain seems much busier to me than the Lower City.
What are the neighbourhoods of the Hamilton Mountain?
I tend to use the divide the Mountain by east, central, and west using the ward boundaries with Ward 6 being east, Ward 7 being central, and Ward 8 being west.
Within Ward 6, I use the Linc, Kenilworth Access, and Mohawk Sports Park as key landmarks. As Mountain streets are on a grid pattern, I’ll almost always note the nearest major intersection.
For Ward 7, the Linc and Limeridge Mall are major landmarks. Stories in the Concession Business Improvement Area are noted as being there. I’ve seen Concession referred to as the North Mountain. I find the term confusing and don’t use it. Major intersections are noted in most stories.
Ward 8 has the Linc and Mohawk College. Major intersections are noted in most stories.

I’m just going to say it, I can’t stand the term “West End” that is sometimes used in local media. There’s Westdale, West Hamilton, Ainslie Wood.
West of the Downtown, I use the neighbourhood names for Strathcona and Kirkendall. Both have strong neighbourhood identities.
West of the 403, it’s either Westdale, Ainslie Wood, Main West for the stretch of multi-res buildings approaching Wilson Street, and McMaster for the campus itself. 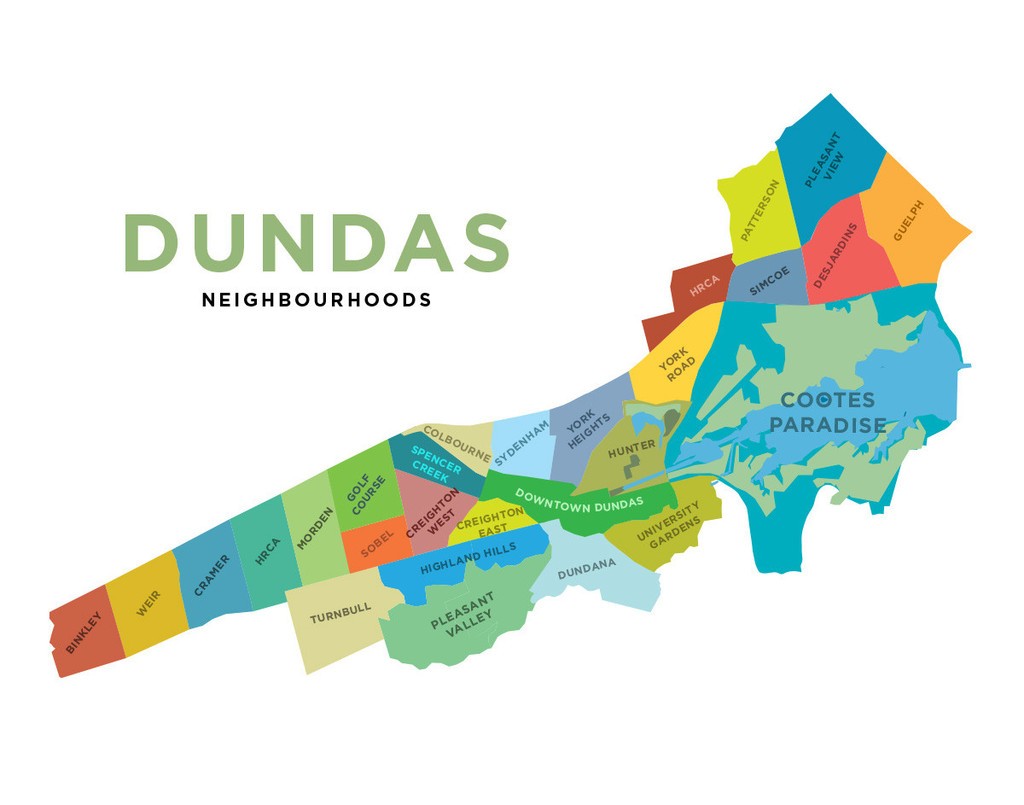 Here’s a question I haven’t answered, where does Binbrook end and Glanbrook begin?
With the rapid growth of the Binbrook urban area, this question has become harder to answer. Officially, Glanbrook is the agricultural area of the area south of Hamilton and Stoney Creek.
Substantial areas of this farm land is zoned within the urban boundary expansion.
For purposes of my stories, I’ll use Binbrook for the existing urban area, and proposed developments.
Mount Hope is clearly defined.
For the reminder of Glanbrook, I’ll use reference points such as Highway 6, major intersections, and proximity to Binbrook and Mount Hope to describe location.

I use the Ancaster Meadowlands for the newer parts of Ancaster east of the 403, Old Ancaster for the downtown area of Old Ancaster.
Major intersections are used for other areas of Ancaster.
Alberton, Carluke, and Jerseyville are referred to by their community names in stories, reflecting their continuing unique identities. Duff’s Corner’s remains a historical landmark at the intersection of the former Highways 2 and 52.

Flamborough is many communities: Carlisle, Copetown, Freelton, Greensville, Lynden, Millgrove, Rockton, Sheffield, and Waterdown.
There are official boundaries for each of these communities.
Generally, I’ll use the community that individuals in my stories self-identify with. Someone may be just outside of the boundaries of a rural settlement, but still identify with it.
I’ll use major intersections to try to place stories.

I’m put out my view of Hamilton’s localism. I’m sure many of yours may differ.
I’m especially interested in what your thoughts are for local boundaries in the former municipalities.
Thanks for reading.