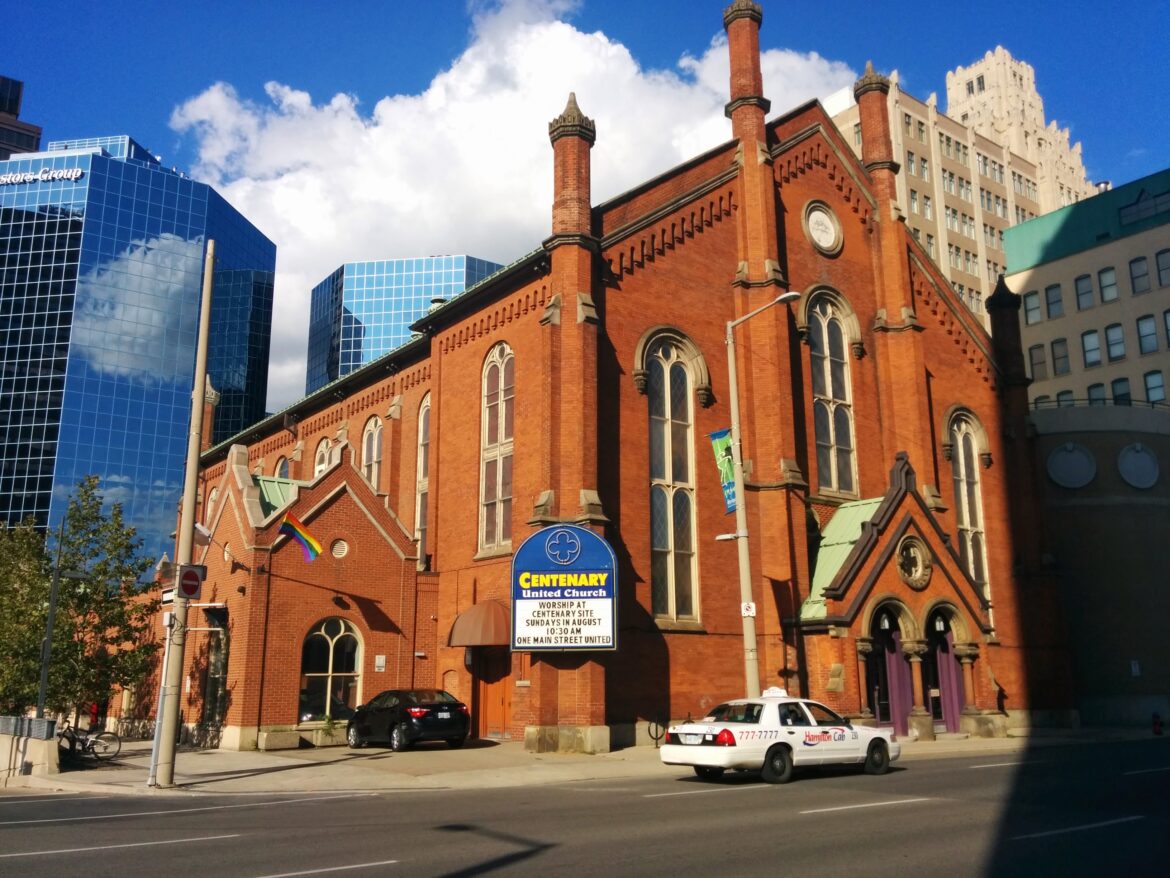 Update: Centenary say they are not opposed to being on the interest list. Only to a possible heritage designation in 2021. They’re delegation was received at City Hall (and I’ve checked with others) as being against the interest listing as well.

Another one of Hamilton’s downtown churches is in financial distress, and the 19th century landmark structure could be heading towards sale or even demolition.Centenary United Church – on the corner of Main and MacNab – wants to be removed from the City’s registry of buildings of heritage interest. (Full List)

There’s only one reason to ask for removal from the registry – to make it easier to demolition a building.

There isn’t much being listed does to a building, and it’s different from designation. Being listed only delays the issuance of a demolition permit by 60 days (Ontario Heritage Act 27.3), and provides access to some limited City grants.

Without listing, a demolition permit would be granted as a right with no public notice. ‘Permit one day, gone the next’.

Recently, a set of listed buildings were facing demolition, and public attention ultimately lead to the buildings being saved from the wrecking ball. 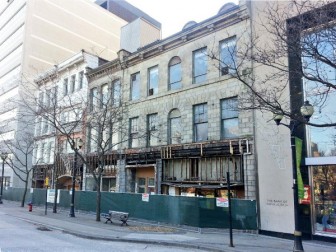 In December 2012, the community was surprised by a demolition request for the pre-Confederation building fronting onto Gore Park at 18-28 King Street East.

There were repeated outcries from the City’s heritage advocates asking Council to revoke the demolition permit.

They were ignored until suddenly, Council voted to designate in December 2013.
If they had not been listed, the wrecking ball would’ve finished the job before anyone noticed.

This brings us back to Centenary United Church, which recently merged with St. Giles United Church to create a new entity called “One Main Street United Church”.

Obviously, any attempt to seek a demolition permit as a condition of sale will result in a similar public outcry by heritage advocates and the neighbourhood association.

Meaning to successfully get a demolition permit, One Main Street United Church must first get the building removed from the heritage interest registry.

On August 21, Helen Bradley, chair of the merged church council, spoke in front of the Hamilton Municipal Heritage Committee asking for the removal.

The presentation officially claimed the heritage interest listing could interfere with the church’s Charter Rights to free exercise of their religion.

Numerous times, Bradley spoke of a need to look at disposition of the building now that they’ve merged with St. Giles Church.

As she noted, the listing impacts the value of the building as an asset for sale.
“The property – if you need to sell the property – would be worth less if the new purchaser could not tear down the building?”, committee member Paul Wilson (yes, the writer) asked Bradley.

“Potentially, it would certainly narrow down our possibilities of building disposition”, responded Bradley.

The Municipal Heritage Committee received the church’s delegation and kept the building listed.

They voted to schedule a full designation review for the building in 2021.

The church building’s cornerstone was laid on May 28th, 1866 – its a prime candidate for designation.

“The Churches are not the villains here,” said Paul Wilson. “You have known property we all enjoy driving past – and meanwhile you have to pay the bills.”

This summarizes the dilemma facing churches across Canada, the United States, and Western Europe.

The buildings are pillars of the culture heritage and character of cities – especially downtown cores – but unaffordable for shrinking church congregations responsible for their maintenance and upkeep.

Large churches – especially those built during the 19th century – are expensive to heat, commonly difficult to retrofit for modern accessibility requirements, and many require costly capital repairs that will cost their shrinking congregations millions of dollars to perform.

They are purpose built for a limited role, the Sunday worship, that society no longer demands.

They are relics, but relics many – likely the vast majority – want to keep.

Churches are being converted to other uses. Some uses keep the community hub role of the building such as a frat house in upstate New York, coffee shops (while remaining a church on Sunday), conversion to a mosque, breweries, and even an indoor skateboard park.

More commonly, churches are converted into housing, mostly into condominiums, with a few even becoming private mansions. (Check out this extensive slideshow of a converted church in Annapolis)

One Main Street United is receiving assistance from the United Church of Canada to explore future options for their downtown church.

The United Church is familiar with selling former churches for adaptive reuse into housing. (Here’s a 2011 article from the church newspaper)

While adaptive reuse is common to other post-industrial urban centres, it’s still a rarity in Hamilton.

The land Centenary United owns at Main and MacNab is likely more attractive (and lucrative) to a developer for a new residential tower than it is as a candidate for adaptive reuse.

As noted earlier, there are two obstacles to demolition.

Council’s shown in the case of the Gore buildings they’ll designated a listed building facing the wrecking ball, and because it’s not designated, it can’t be demolished as a “minor alteration”.

What’s next?, this is the question that must be answered in part by society.

Do we increase the tax incentives for adaptive reuse of designated heritage buildings, do we leave it to the market to determine how this church eventually gets reused, or even buy the building as a City?

What’s clear: We need to start discussing what we plan to do with heritage churches that no longer have the congregations to support the buildings that, as Paul Wilson put it so well, “we all enjoy driving past”.

In absence of the conversation, we should be prepared to write new chapters of Vanished Hamilton.

Personally, I see it as a candidate for a great mixed-income partially affordable housing project.