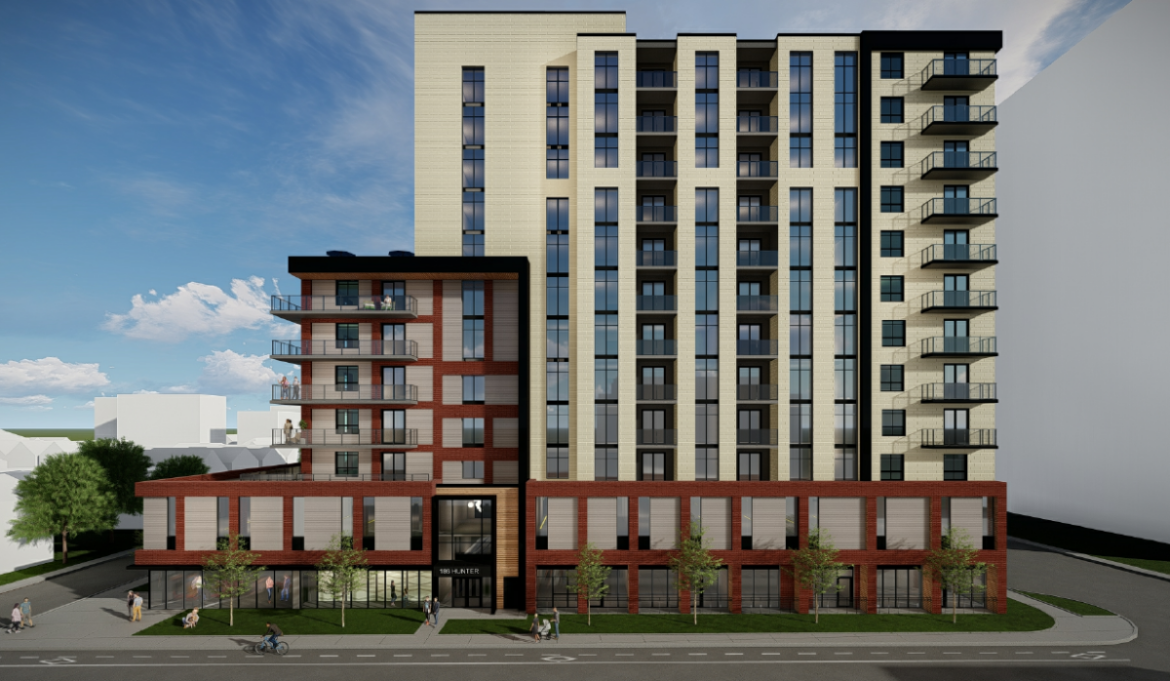 The developer's render for a proposed redevelopment of 186 Hunter Street East in Hamilton, Ontario.

The Ontario Land Tribunal will conduct a 9-day contested hearing to decide upon an application for a 12-storey 104 residential building at 186 Hunter Street East in Hamilton.

LiUNA filed its non-decision appeal in June, shortly after the 120-day deadline for Council to decide on the application.

LiUNA’s lawyer, Russell Cheeseman, expressed frustration at having to wait until November for the hearing.

“Just for the record … we filed this application back in December of 2021. It was deemed completed January, early January of 2022,” Cheeseman opened.

“It’s non-profit housing, and we’re, you know, it’s two years to get a hearing date. I just want to go on the record saying … [the City] may need to get some more people in their legal department to handle the hearings that are coming their way,” Cheeseman continued.

OLT Vice-Chair Sharyn Vincent noted Cheeseman’s concerns and suggested the parties work to narrow the issues, attempt mediation, and have their experts meet.

“I cannot encourage strongly enough the importance of putting the disciplines together in one room. I generally highly recommend without the attendance of counsel. I obviously can’t dictate that I’ll leave that to the parties,” stated Vincent.

Cheeseman states he expects to call three or four expert witnesses in response to the City’s experts.

Both lawyers say they are close to agreement on the issues list for the hearing.

The OLT videoconference meeting was observed by at least one member of the public.

Earlier in the hearing, Vice-Chair Vincent asked questions of clarification regarding the proposal, asking Cheeseman, to “describe for those that are observing the understanding as to what a non-profit housing unit is.”

“As I understand it, ma’am, non-profit housing means that it’s going to be less than market housing for people who, who need that form of assistance,” Cheeseman stated.

“It is definitely targeted as a nonprofit. Alright, thank you,” Vincent confirmed.

The City’s lawyer agreed to send a finalized issues list to the OLT Vice-Chair within two weeks.

Following this, the OLT will issue a procedural order.