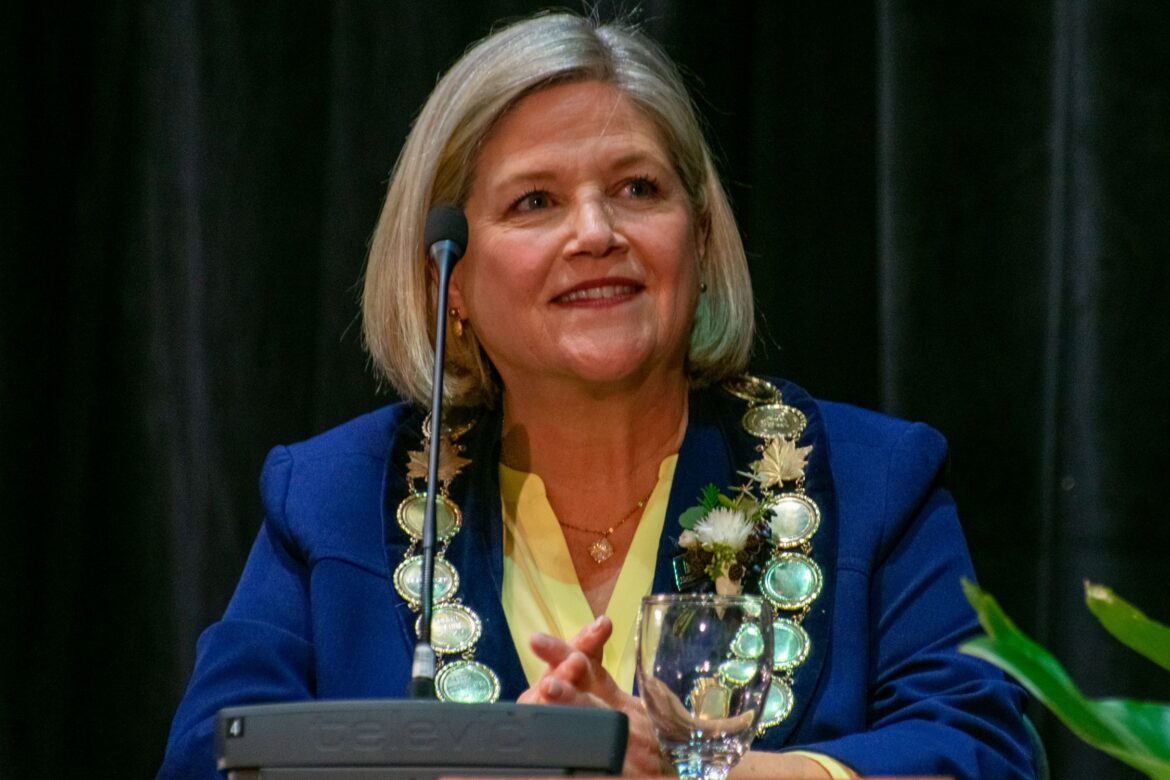 Hamilton Mayor Andrea Horwath at her Inauguration on November 16, 2022.

The first major public pronouncement was in response to an unconscionable decision by City staff to shut off funds to the City’s only overnight warming centre in the middle of Christmas Eve’s blizzard.

The second is responding to a landlord not providing water in an East Hamilton building.

The first was entirely reactive. The second, while also reactive, is a significant change – past mayors never acted to protect Hamiltonians who rent their housing.

At 7:06 pm on Christmas Eve, with a wind chill of -23 and wind gusting to 60 km/h, Hamilton City Hall declared a -19 windchill to be warm and ended the City’s Cold Alert.

Charles Dickens could not dream up a worse modern-day Scrooge.

The decision to close Hamilton’s only overnight warming centre, The HUB, sparked a public outcry. The public raised funds to keep the centre open and City Hall entered into spin mood trying to justify being the only municipality to cancel its Cold Alert.

The Mayor commented on Boxing Day, and two days later (Dec 28) announced the City will operate and fund warming centres throughout the remainder of this Winter.

The truth of what happened is already obscured in the attempts to deflect blame for the Christmas Eve decision.

City staff claim that cancelling the Cold Alert did not affect The HUB.

City Council passed an urgent motion at the December 1, 2022, Emergency and Community Services meeting adding $125,000 to the budget for overnight warming centres. The direction was clear – the centres were to be open.

Hamilton’s unhoused population is increasing. Emergency shelters are full and turning people away. People are desperately trying to find create ad-hoc shelter from the elements. Renovictions continue to drive people into homelessness.

For too long, City Hall has seemingly ignored the plight of renoviction.

In fact, the City supported renovictions with financial incentives.

December 30th’s CHCH newscast aired an all too familiar story, a landlord failing to provide essential services to their tenants.

The same tenants the landlord is trying to renovict. City staff did not provide comment to CHCH.

In a change from past practice, Mayor Horwath quickly commented after CHCH reported the story.

“I’m very disturbed by the situation at 1083 Main St. E. and have asked City staff to do everything possible to ensure people have access to water which is a necessity of life and a basic human right,” Mayor Horwath tweeted.

On January 1st, the Mayor updated the City was delivering water to the residents.

“I will continue to monitor the situation and take immediate action as appropriate to ensure community members have access to vital services in their homes. We are continuing to explore all avenues we can at the municipal level,” the Mayor tweeted.

These decisions signal to City staff that priorities are changing.
Cancelling a Cold Alert saved $3000. Not enforcing property standards saved money. If money is what is measured, these are the expected outcomes.

If the measure is public service, the outcomes serve people.

Preventing hospitalizations and homelessness is a good public policy, no matter how you view it.