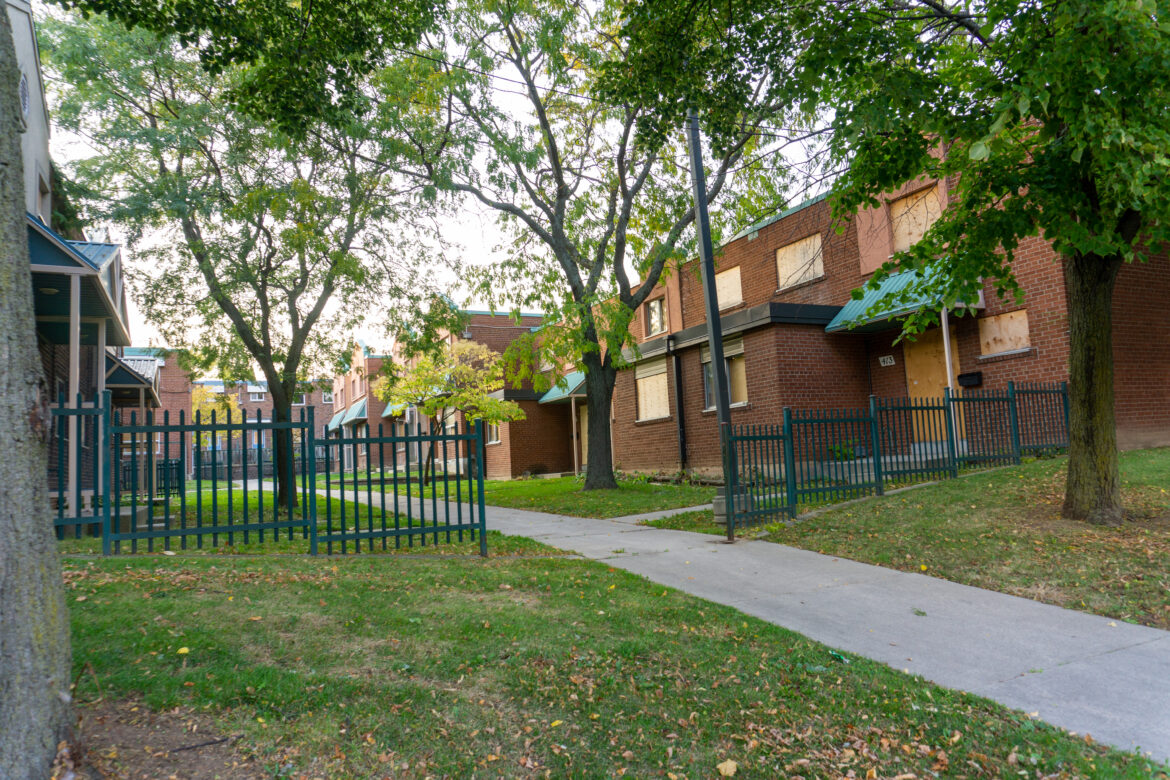 A portion of the boarded up and vacant Jamesville Housing complex in Hamilton's North End. Ward 2 Councillor Jason Farr and Hamilton City Council emptied the housing to sell the land for private redevelopment with smaller social housing units to replace the current social housing homes

The property is directly north of the West Harbour GO train station and within 300 metres of the CN Stuart Street Yard, which generates much noise during shunting operations.

CN filed their appeal in September.

The Ontario Land Tribunal received the file on September 28, 2022. It was not posted to the OLT database until November.

During the interim, the now-owners began demolition work after the appeal period ended in September.

It is unknown why the City did not inform the developers or the public about the appeal.

The appeal leaves City Council with a few issues to resolve, including finding a settlement with CN, determining if the partially demolished townhouses should remain as is or if Council will grant an exemption to development charge credit deadlines, and deciding on changes to the development plan following the Bill 23 Planning Act changes.

Politically, there is ongoing public frustration at the City’s decision to close rent-geared-to-income family housing years ago – during an ongoing housing crisis.

The previous Council’s decision to not replace family housing and instead build smaller apartment units further added to the controversy of the plan.

The previous Council finalized the land sale, and the new Council cannot revisit the deal.

CN’s appeal letter indicates they believe the City failed to meet the planning and environmental requirements to ensure compatibility with CN’s operations.

“Sensitive uses should not be permitted within 300 metres of rail yards, as rail yards have an area of influence of 1,000 metres where negative impacts can occur on the proposed use,” writes CN’s legal counsel Katarzyna Silwa of Dentons Canada LLP.

“CN’s reasons for the appeal are centred on concerns of safety, odour, vibration, noise and whether the proposed sensitive land uses are appropriate for the Lands. CN was not opposed to the approval of OPA 249 and ZBLA 22-220 provided that the impact of the adjacent rail operations were accounted for and mitigated, as required.”

CN’s concerns are similar to those of industries near the Pier 8 redevelopment site.

Bunge Canada and Parrish & Heimbecker Ltd both appealed the City’s original Pier 8 redevelopment plan to the Local Planning Appeal Tribunal (as the OLT was known then) in 2017.

They were concerned that residents living in the then-planned upscale condos on the east side of Pier 8 would regularly complain about their operations.

Both sought to protect the sensitive use zone surrounding their properties.

Negotiations resulted in an agreement between the City and the industrial appellants.

Some residential units shifted towards the western side of Pier 8.

The change in orientation and design of the east side Pier 8 buildings creates both a sound and visual barrier.

The difference in the east (left) side design is shown between an earlier design concept [top] and the present design proposal.

A settlement modifying design standards and layout is a likely outcome of the Jamesville appeal. 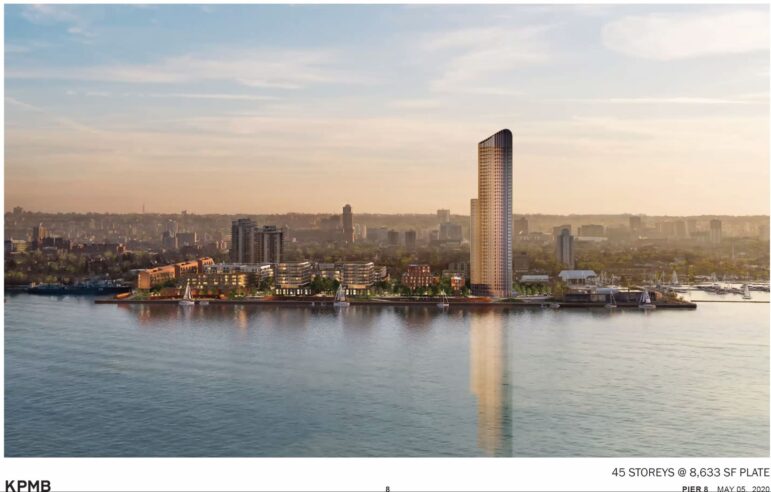 A conceptual design for a 45-storey tall building at Hamilton’s Pier 8 redevelopment designed by Bruce Kuwabara and shown to a meeting of the North End Neighbourhood Association on May 20, 2020.

Section C7.2 of NPC-300 sets the acoustic measures that must be implemented by the developer.

Council can extend the timeline.

Development charge credits are why the Jamesville development waited for confirmation there were no appeals before beginning some demolition work in September.

Once Council approves a timeline extension, such as ‘five years following a final determination by the Ontario Land Tribunal,’ demolition work can resume.

The Jamesville site, situated beside a GO train station, is permitted significantly more height and density than approved.

There were concerns that one of the North End’s neighbourhood associations would appeal any structure taller than six stories. No neighbourhood appeals were filed.

The Pier 8 development plan was significantly changed in that appeal process, with the plan for a 45-storey tall building emerging as part of the settlements to shift new units further from port industries.

A date has yet to be set for the OLT Case Management Conference (pre-hearing), during which the public can register for party or participant status.