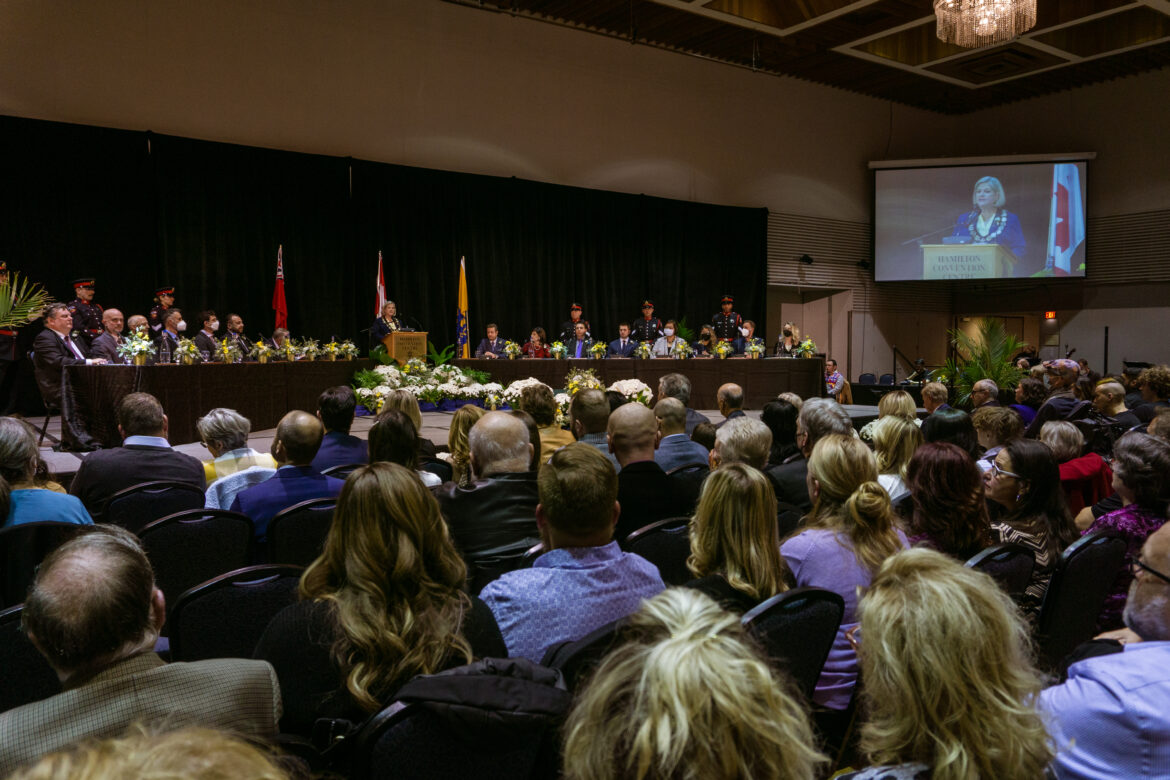 There were no new shiny things promised in Mayor Andrea Horwath’s Inaugural speech.

She committed to keeping her campaign promises, to building a better Hamilton, and to improving City Hall.

Mayor Horwath’s speech outlines a four-year vision to build a deep strong fountain for the future prosperity of Hamilton, led by an efficient and effective municipal government capable of addressing the challenges facing us in housing affordability, supporting housing, health care, climate change, poverty, and education.

Horwath’s speech opened with thanks and gratitude to “the people of Hamilton who voted entrusted me with the sacred trust that is the mayoralty.” She thanked Keanin Loomis, Bob Bratina, and all candidates who ran in the municipal election. She thanked outgoing Mayor Fred Eisenberger, the outgoing Council, and stated expressed excitement for a “new era with a largely renewed Council.”

“I feel humbled because I realize the challenges our city faces – they are serious and they are profound. Some are systemic. All will require serious investment of time and thoughtful planning to be addressed in a sustainable, open, transparent, and compassionate fashion,” Horwath opened the substantive portion of her twenty-minute address.

“My term as mayor will be guided by these principles as I approach our city’s policy, governance, planning and development.”

Horwath does not just promise transparency. She is fulfiling a promise to strike her promised diverse Public Advisory Committee within her first 90 days, “tasked with recommending improvements to access, transparency and accountability at City Hall.”

“As we move forward to address our housing affordability challenges, we will recognize that safe, healthy, affordable housing is a basic human right,” Horwath stated.

She promises an approach that will provide supportive housing, accessible housing, and safe housing for those who need it.

She says, “we pressingly need to address the housing shortage our city is experiencing,” and she will work with “not-for-profit housing organizations, private market developers and the provincial and federal governments” to get housing projects “started fast” to “eliminate the affordable housing waitlist.”

There were 5,716 “active households” on the City’s affordable housing waitlist at the end of 2021.

Horwath will reinstate the publication of key performance indicators and open data.

“One thing I heard loud and clear during the campaign is that the residents of Hamilton want greater openness, transparency, and accountability,” Horwath stated.

“That means a City Hall that proactively maintains and publishes key performance indicators on how its operations are making Hamilton a better place for its residents.”

The dashboard pilot began in November 2018 and included near real-time data on city operations, spending, and climate change initiatives.

The City no longer publishes the key performance data in a dashboard. Some data is posted annually in reports, none of it with the breath of the removed dashboard.

Horwath says the City of Hamilton needs “to develop a more streamlined and effective approach to how we use our website and our other digital channels such as social media, audio and video.”

Horwath promises to “consider accelerating and expanding our Hamilton Cycling Master Plan to create a city where residents can safely and more surely travel via public transit, bicycle and by foot,” “renew Hamilton’s transit plan to take us beyond 2025,” “expedite the implementation of the BLAST network,” and ensure the LRT is kept “on track” to completion.

Hate Incidents, Inclusion and Building a Sense of Belonging

The rise in hate incidents in Hamilton needs to be addressed. Horwath said she will work to tackle “hate, systemic racism and discrimination in all their forms by working with communities and leaders.”

“We will continue to strive toward implementing the 94 Truth and Reconciliation Commission’s calls to action and the 231 Missing and Murdered Indigenous Women, Girls and Two-Spirited People calls to action that are in our purview,” she stated.

City Council “will undertake an annual assessment of how we are doing in reaching our goals and publicly report on progress.”

Horwath addressed labour rights and issues, economics, and attracting talent to Hamilton in her speech.

She closed by stating “We will work to build the Hamilton of our dreams and aspirations. We will build a city that is again a leader in Canada.

We will do this important work together, inviting everyone to participate, to innovate and to thrive. Let’s get started!”

You can read the official version of the Mayor’s Inaugural address here. Horwath slightly varied from it in the address.