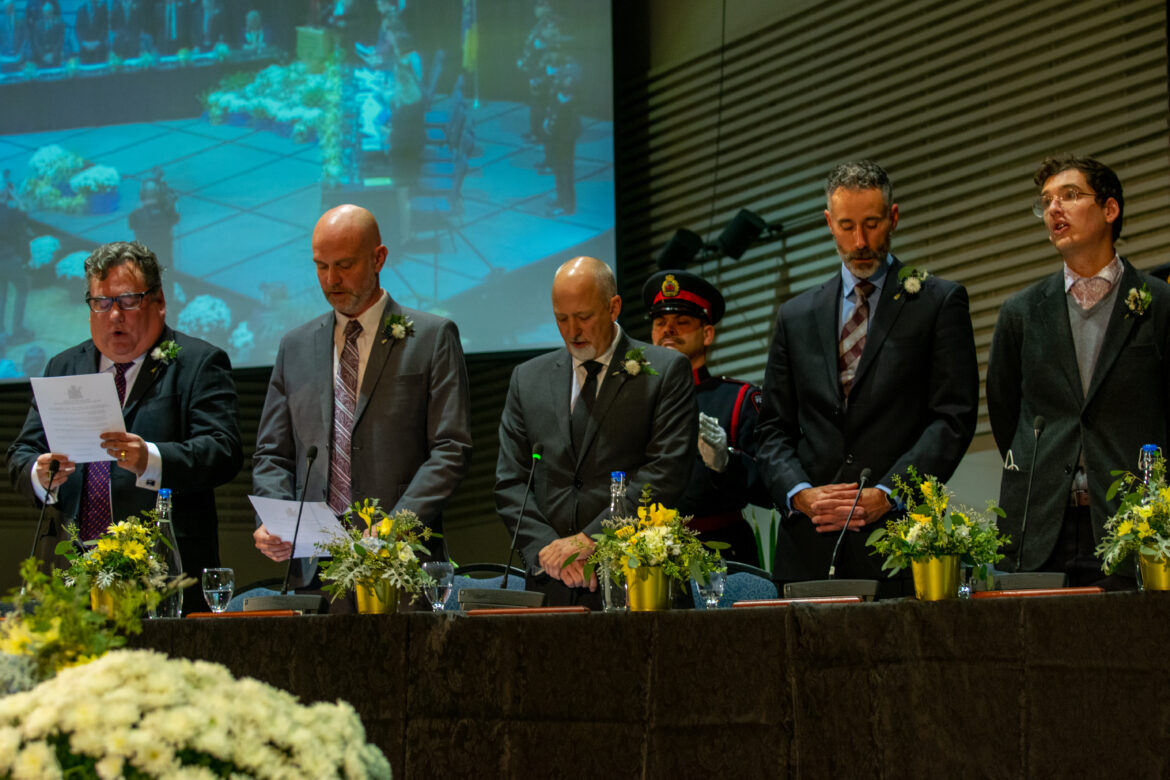 Hamilton City Councillors affirm their Oath of Allegiance during the 2022-2026 term inaugural meeting on November 16, 2022

The Queen is dead. God save the King!

The words pronounced upon the death of the sovereign caught some by surprise when Queen Elizabeth II died.

Another tradition of our constitutional monarchy which surprises people is Canadian oaths of allegiance are sworn (or affirmed) to the reigning monarch.

Past Hamilton politicians have protested swearing allegiance to the then-Queen.

Keyes stood in the House on February 3rd and stated he was inspired by a call-in segment on CHML’s Roy Green Show. “As we are revisiting our constitution, I believe it is high time that members also swear an oath to Canada as well as the Queen.”

Shortly after, in late April 1994, Ward 5 Alderman Dominic Agostino wanted to change the councillors’ oath to swear to Canada. “We are no longer a colony of England,” Agostino was quoted as saying by TheSpec.

“We are a mature country. I still believe we should keep the oath to the Queen in there, but I would like to see us add a pledge to Canada.”

Agostino stated he was motivated by patriotism. His colleague, Ward 4 Alderman Dave Wilson, is quoted stating, “I have five children and I recognize a plea for attention.”

The proposal was not well received by City Council. No change was made.

Agostino would try to add “and to Canada” at the end of his oath a year later, on June 29, 1995, after being elected as Member of Provincial Parliament for Hamilton East.

He informed the media in advance and added the words as the Clerk of the Legislative Assembly administered the oath.

The Clerk refused to swear him in, in what was reported as the first instance of an MPP refusing to take the assigned oath. The Clerk informed Agostino he could not enter the Legislative Chamber until he took the oath without any additions or subtractions.

“It is a sad day when an elected official in this country cannot sit in the Legislature that he’s been elected to because he wants to swear allegiance to Canada,” Agostino stated to the assembled media.

“Subtlety was hardly what rookie Ontario MPP Dominic Agostino had in mind yesterday when he insisted on swearing allegiance to Canada and the Queen. It’s just not done, and to add Canada to the oath would involve a messy constitutional change,” is how Hamilton-born CTV National News report Paula Newton described the news on-air the next day.

Among the onlookers at Queen’s Park that day was Deputy Prime Minister Sheila Copps, the Member of Parliament for Hamilton East.

The Canadian Press quotes Copps stating, “I think he’s expressing the view of a lot of Canadians that, on the eve of Canada Day we should be proud of the fact that we are Canadians.”

On July 20, Agostino swore the required oath, then read his own oath to Canada.

Jim Coyle, then a columnist at the Ottawa Citizen, described Agostino as bound for the “Hall of Egos” with him being a “walking media event” who could turn “pedestrian event into front-page news by insisting on pledging allegiance to Canada as well as the Queen.”

Agostino moved a private members bill to compel MPPs to swear a second oath to Canada (the Constitution sets the required oath of allegiance). It near made it to the final third reading.

Nothing more has become of this issue in Hamilton during the past 22 years.

Tonight, the new Hamilton City Council affirmed their oaths of allegiance to King Charles III – the first time Hamilton politicians swore allegiance to a King since the death of George VI in early 1952.