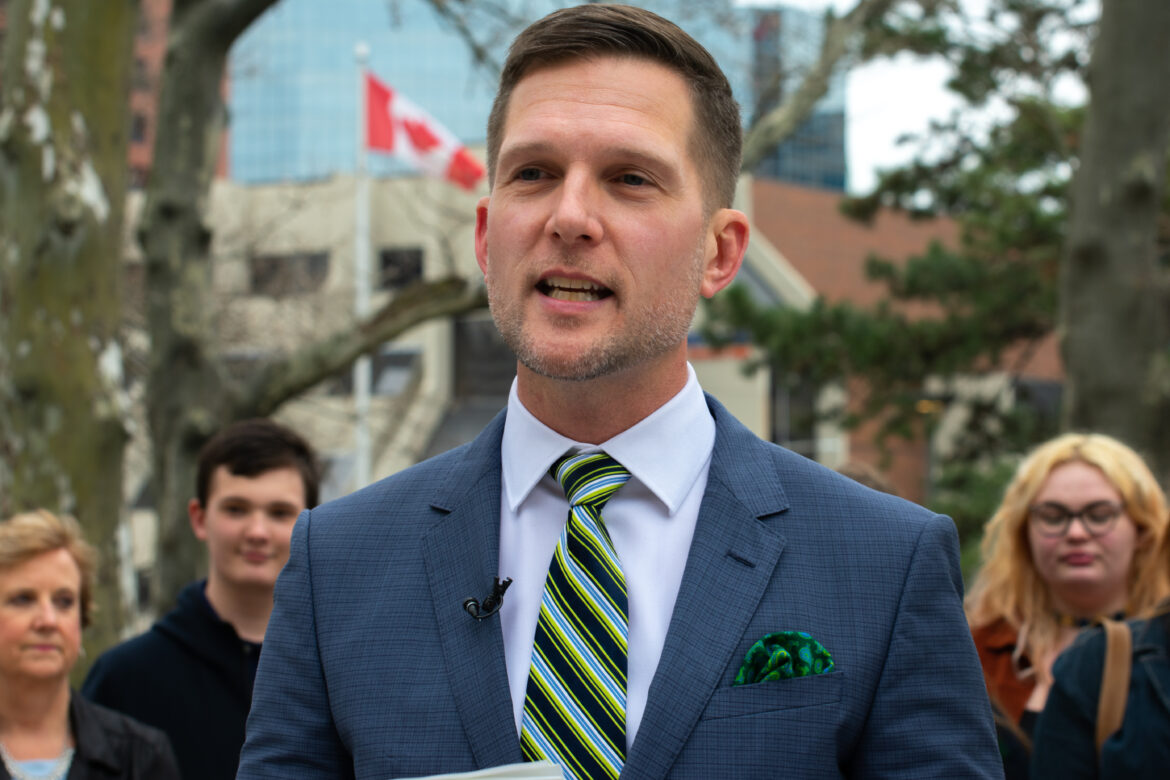 Hamilton mayoral candidate Keanin Loomis speaks to media on May 2, 2022 shortly after registering his nomination.

This is a corrected version. Loomis did not moderate the event.

Mayoral candidate Keanin Loomis is facing a skeleton of his past today as The Hamilton Spectator has confirmed Loomis confronted a YWCA manager in 2019 following a published critique of a Chamber event.

The incident was discussed in chattering circles over the years, with the people involved declining to go on the record. There is plenty more detail in TheSpec article.

There was commentary at the time regarding having men on stage with Obama, especially when the marketing focused on her as a female role model and leader.

The event contract with Michelle Obama stipulated the format and who was on stage.

Medora Uppal wrote an op-ed published in TheSpec on October 24, 2019, that was headlined “In praise of Michelle Obama’s fierceness.”

In it, Uppal stated it should’ve been another woman onstage interviewing Obama.

“While two well intentioned white men introduced and interviewed Michelle (and yes, I call all my heroes by their first name), I wondered why space hadn’t been made for other women on that stage. Michelle was fabulous as always and the men did a fine job, but I thought about how different the conversation would have been if a local woman had been up there interviewing her.”

Loomis is not mentioned by name, and Uppal appears to have taken great care in choosing non-confrontational language.

“I think men, particularly white men, have a different understanding of Michelle than do women. It’s not an invalid perspective, it’s just not a perspective I am interested in when I want to hear her speak. I did agree with the interviewer when he said we need more Michelle Obamas in this world. We certainly do and fortunately we have them, they are all around us. They were in the audience. They we were right there in front of him, the Michelle Obamas he was looking for. But he, like so many other men, missed the point. If you really want more Michelles, some people need to step aside, make space, and get off the stage.”

Following publication of this op-ed, Loomis called Uppal’s boss to complain and then showed up in person at the YWCA to complain further.

This incident completely overshadows the challenge Loomis faced following a comment – or at least how it was tweeted – last night during one of his Town Halls.

Kevin Werner tweeted “Ham mayoral candidate Keanin Loomis says Ham ‘needs to get out of housing. We need to do that in long run.’ Says city should “be able to rely on not-for-profits to build affordable housing.” Says take CityHousing Hamilton’s $51m budget and give it to non-profits to use.”

Loomis issued a statement this morning, “I want to make myself 100% clear: our housing plan does not involve touching CityHousing Hamilton’s budget, nor do we intend to change the vital role CHH plays in providing affordable housing to its 13,000 tenants.”

Werner’s accuracy is excellent. The quote was said.

I was not in the audience last night. I have been to many debates and speeches during which I’ve heard Loomis speak on housing and CityHousing Hamilton.

Based upon statements made at those other events, I take the comments as referencing that CityHousing Hamilton is inefficient and bureaucratic, and new affordable housing is better built and operated by the City’s various non-profit and charitable housing agencies.

Loomis repeatedly states the City should waive development charges for these housing providers, the same as it does for CityHousing Hamilton.

Privatizing CityHousing Hamilton? The municipality is prohibited from doing so.

He confirms Loomis stated, “The city needs to get out of housing” and adds Loomis stated the CityHousing Hamilton budget of $51 million should be provided to Indwell.

Bratina’s statement includes “I was shocked to hear that one of my opponents announced last night that he would gut CityHousing Hamilton and get Hamilton out of the housing business. This would throw 13,000 tenants into great uncertainty. He also committed to providing CHH’s $51 million annual budget to unnamed third party groups. This is outrageous.” [Full statement here]

Horwath statement includes “Housing is a human right. Period. Everyone has a role to play in ending homelessness: government, not-for-profits, and community. As mayor, equitable access to housing of all kinds will be my number one priority – not making a $51-million cut to public housing.” [Full statement here]