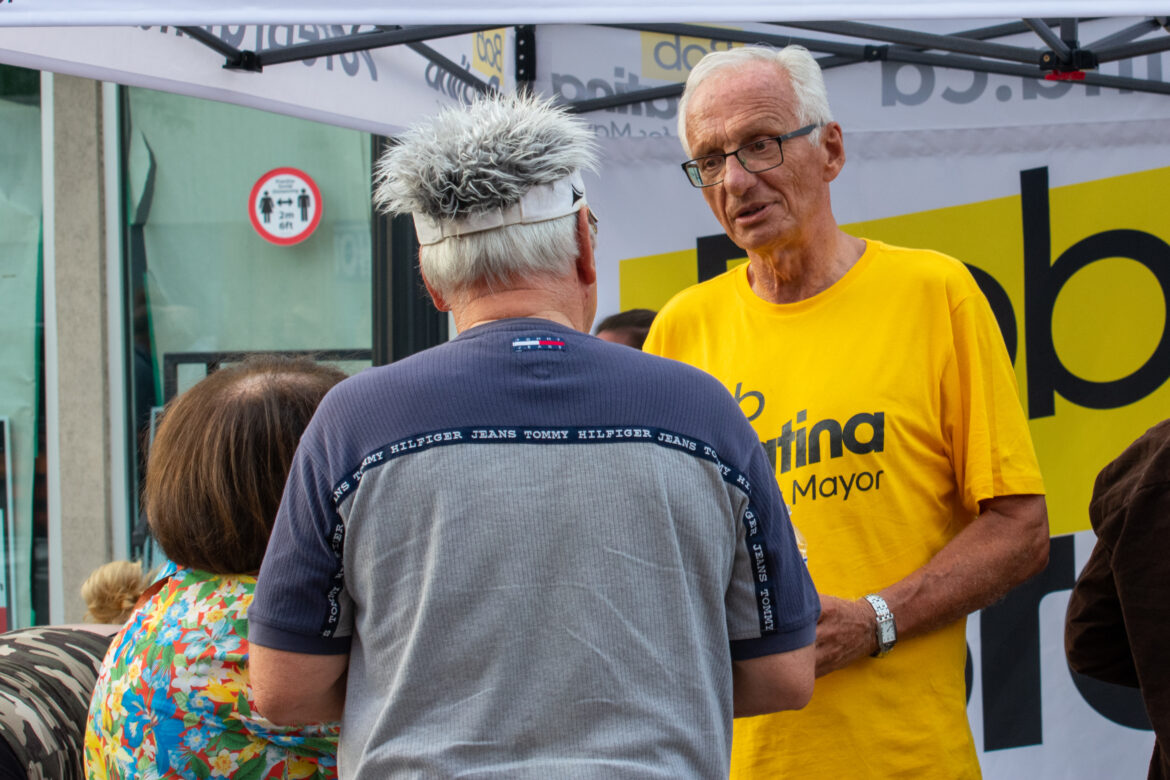 Mayoral candidate Bob Bratina chats with an interested voter during the Dundas Cactus Festival on August 20, 2022

Bob Bratina loves the “people side” of being mayor, and it showed Saturday night at Dundas’ Cactus Festival.

With his baritone voice and smile as people approach, Bratina is in his element, posing for selfies, and handing out campaign literature.

There was a steady flow of people looking to chat with Bratina.

The discussions ranged from reminiscences of the past to a young woman who extensively quizzed Bratina on various topics, beginning with housing affordability.

[Bratina’s campaign sent me the event advisory. I could not attend because I was conducting a The 155 Election Podcast interview at the same time.]

Both reports state Bratina wants to address affordable housing, employment lands, a review of the City of Hamilton’s housing agency CityHousing, problems of toxic culture at City Hall, and infrastructure.

Hamilton’s 2022 municipal election is the first in decades not to be pigeon-holed into a faux “referendum” on a single polarizing issue.

[Pundits, commentators, and legacy media will attempt to make Transit Area-Rating the wedge issue. It remains to be seen if it becomes the wedge.]

There is an unusual consistency to the people’s concerns in this municipal election – affordability and good government.

There will be two keys to victory: convincing voters you are the one who will deliver on promises, and actionable data collection and analytics.

Bratina’s campaign must persuade voters that his experience makes him the candidate who will implement change.

His age is an issue. Ageism and whether it should be an issue does not change the reality that media give much significance to generational change.

The second key to victory brings us back to Thursday night’s campaign launch.

Sgro brings the Hamilton-East Stoney Creek Liberal campaign machine to the campaign, and it brings a reliable donor and volunteer base to Bratina.

These two political machines combined give Bratina a key early advantage in voter data across Wards 9, 11, 12, 13, and 15.

Data is useless without good analysis and strategy.

Muys’ team includes bright young strategists who’ve identified the key Facebook groups at the neighbourhood level across Hamilton. This team knows the other platforms well (Instagram, Telegram, etc). They will use them to mobilize voters for Bratina.

All three frontrunner mayoral candidates will have booths at this coming weekend’s Winona Peach Festival. The race is well underway.