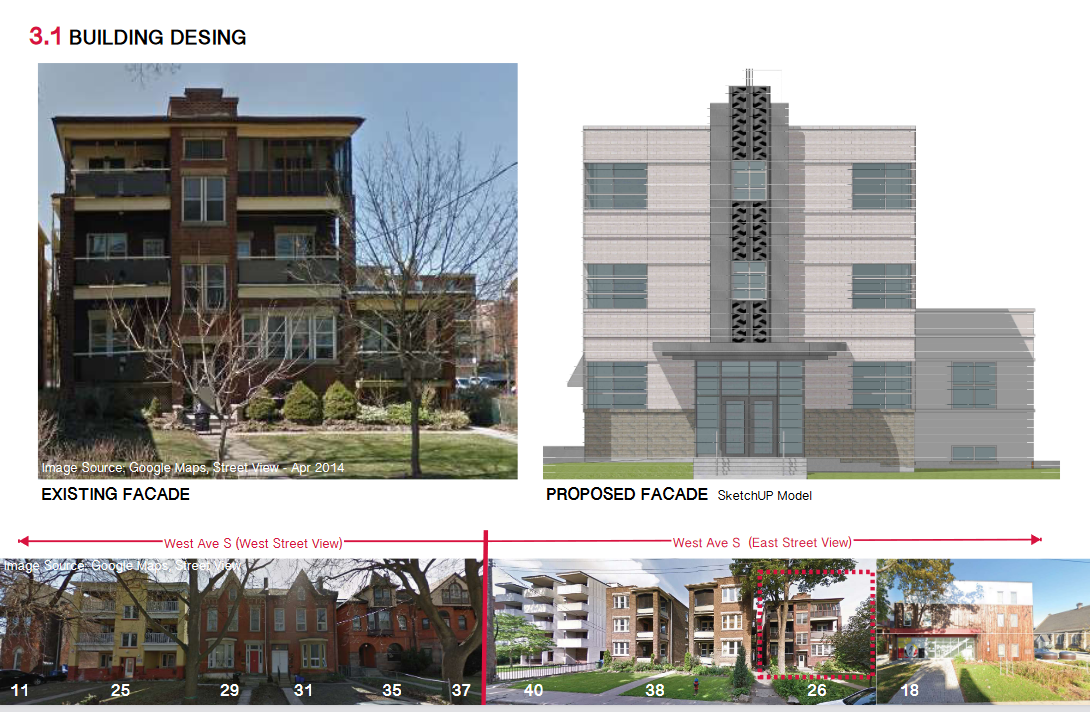 The owners of 26 West Avenue South are hopeful of converting their building into smaller residential units with an addition to the front of the building to add even more units.

DPR members expressed many reservations regarding the proposed changes to the existing building and the proposed addition.

The building, an early 20th-century walk-up low-rise with large balconies, is located within the Stinson Established Historic Neighbourhood in a pocket of well-designed brick residential low-rises and Victorian homes.

The building is presently vacant after the building was allowed to deteriorate into an unliveable condition and all the tenants were renovicted.

DRP Member Eldon Theodore was critical of plans to remove the balconies of the existing large residential units “in favour of the extension of the building” because it removes amenity space.

The developer’s agent told the panel that the lobby constituted amenity space. The Panel did not agree.

“I think suggesting that the lobbies an amenity falls flat, that really is just a space to move through,” Theodore responded.

Other DRP members stated the planned addition needs to integrate into the design character of the surrounding buildings.

DPR Member Joey Giaimo suggested adding density at the rear of the building instead of the front addition, saying the owner should restore the building “keeping it very simple … would ensure that it retain its historic character and quality within the neighbourhood.”

DPR Member Eldon Theodore echoed Giaimo’s comments, saying the existing large balconies are “characteristic of the character of this neighbourhood.”

He added the building needs amenity space, “when I look at when I think about the quality of life of residents within a building, and I think that quality of life can’t just be living in that space.”

Design Review Panel Chair David Clusiau summarized the DRP’s position on the development by saying it fails to meet the three criteria the DRP was measuring it against.

“I think that the answers to the three questions that were asked on the summary are I would have to say are no, it isn’t conserving and respecting the existing built heritage features of the area. The materials are not consistent and compatible with the surrounding context. And know the proposal doesn’t contribute to the character and ambiance of the community through the appropriate design and streetscapes in many areas.”

The applicant’s presentation slides can be viewed on the City of Hamilton website here.