The meeting begins at 9:30 am on Tuesday morning and will be livestreamed on YouTube. 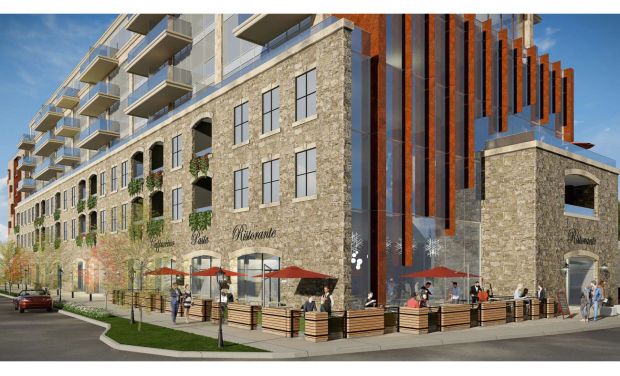 City planning staff are recommending Council deny an application to build an eight-storey mixed-use development at 392 to 412 Wilson Street East saying it failed to conform with the Ancaster Wilson Street Secondary Plan and does not meet the intent of the Urban Hamilton Official Plan.

In October, with the support of Ward 12 (Ancaster) Councillor Lloyd Ferguson, Council voted to approve moving the Philip Marr House, a designated heritage building from c. 1840, to facilitate this development.

This planning application was filed on December 22, 2021. The City’s planning staff moved quickly to process the application to get it in front of Council for a denial vote prior to the 120 days threshold for a developer to file a non-decision appeal to the Ontario Land Tribunal.

By denying the application before the April 20, 120-day deadline, Council requires the Ontario Land Tribunal to give consideration to both the position of Council and the feedback received from the public.

Public notices were issued on February 4, 2022. 77 letters and emails opposing the development were received by City Hall.

“It is noted that the historic Ancaster downtown area is unique in that the street front has many breaks and spacing between buildings. Based on the scale and massing of the proposed building, the proposed development would interrupt this pattern. The solid massing is not representative of the village form of individual buildings along the street, the proposed height is more than triple what is currently supported, and the arrangement of building components does not complement the nature of the Ancaster Village Core area.”

Other reasons for denial listed by staff include greater density than permitted, traffic impacts beyond what Wilson Street can absorb, and insignificant studies to determine if “the existing downstream sanitary system has sufficient capacity to support the proposed density on the site.”

The Hamilton Conservation Authority is not satisfied with the proposed stormwater control measures.

Among the 77 letters opposing this development application, a handful of letters express support for intensification along Wilson Street in the range of four to five storeys.

“I feel that Ancaster residents will have to accept gentle densification in order to accommodate population growth within our urban boundary. This being said, the proposal for an 8 storey structure is too tall but I believe a 4 storey building would fit in nicely with the aesthetics of the town and would maximize the amount of housing it provides,” wrote Anka Cassar.

“As an Ancaster resident, I am in favour of missing middle density (2-5 storeys) being allowed here. It is my belief that the Ancaster Secondary Plan is out of date and needs to be revised in light of the absolute necessity of municipalities to meaningfully address the climate emergency. Hamilton has declared a climate emergency and allowing well-planned infill projects to be built within all neighbourhoods across the city is one step we can take to do our part. Additionally, Hamilton City Council has voted for no urban expansion so gentle density in the city is now crucial if we are to avoid sprawl onto farm fields,” wrote Nancy Hurst. Hurst is a key organizer with Stop Sprawl HamOnt.

The vast majority of the letters called for a maximum height of 2.5 to 3 storeys.

There are over 200 pages of “housekeeping amendments” to the City’s various zoning bylaws and official plans.

Councillors are being asked to approve a new Temporary Use By-law to allow businesses across Hamilton to continue operating outdoor patios using tents as they have during COVID.

The extension will allow for the continued use of temporary tents by businesses and institutions such as places of worship, seniors’ homes, and educational establishments.

The Temporary Use By-law allows tents to remain in place for up to six months, whereas Hamilton’s permanent bylaws limit their use to five consecutive days.

It will remain in effect until March 31, 2025, to give time for the City’s planning staff to further review how businesses and institutions are using temporary tents.

Staff will bring forth recommendations before the by-law expires in 2025.

City staff will also monitor to see if temporary tents are used for outdoor entertainment.

In a separate report, City staff are recommending the City rescind its outdoor entertainment ban.

Council voted in February to create a permanent program for temporary outdoor patios following their success during COVID.

Both programs will be reviewed regularly by staff, with reports to Council.

This follows a successful four-year pilot allowing live or recorded entertainment on outdoor patios in a few districts such as Downtown Hamilton, Downtown Dundas, and Upper James Street.

During the four-year pilot, the City states there were no noise complaints regarding outdoor patio music. The pilot capped noise at 60db.

Patio operators could apply for a noise exception permit to exceed 60db, for example, to hold an outdoor concert. There were no permit applications during the pilot.

If Council rescinds the bylaw provisions, all patios across Hamilton will be allowed outdoor entertainment.

This includes the North End where neighbourhood association Harbour West Neighbours appealed to the Ontario Municipal Board when Council created the pilot in 2017.

HWN withdrew their appeal in 2018 when the City agreed to remove the North End and West Harbour from the pilot area.

The City will implement an administrative penalty system offence using the Licensing By-law to use alongside the noise by-law to fine any businesses which exceed the 60db limit or that cause disturbance to neighbouring properties.

Staff Say No to Soil Stockpile in Glanbrook, Owner Appealing to Council

Hamilton’s Acting Director of Growth Management Carlo Ammendolia is asking Council to uphold a staff decision to not permit a stockpile of 1,750 cubic metres of topsoil at 2330 Guyatt Road in Glanbrook.

City staff issued an order to comply against the owner on June 25, 2021, after observing “Site Alteration activities without a valid Site Alteration Permit.”

Following the order, the owner applied for a permit. Staff denied the permit application stating the “proposed stockpile is not consistent with the regulations for ‘Stockpiling for Agricultural or Commercial Operations’ per Section 6(1) of the Site Alteration By-law No. 19-286.”

The soil is already stockpiled on the Guyatt Road property.

The soil originated from a development at 90 Glover Road in Hamilton. The tenant farmer, John Vanderwoude Sod Farms Ltd., states they will use the topsoil as part of their sow farming practice.

The land is owned by P & L Livestock Limited, a Burlington company with offices at 4450 Paletta Court. This corporation is part of Paletta International Corporation. A development arm of the company completed the 90 Guyatt Road project.

Staff write, “there is no evidence that top soil rehabilitation or spreading across this property is necessary as part of a Normal Farm Practice.”

The staff opinion was peer-reviewed by City’s Agricultural and Rural Affairs Committee, and they agreed with the staff assessment.

In their appeal, the developer argues that sod farming requires replenishment of soil, and City Council should allow this stockpile to be used by the farming operation.

If Council upholds the permit denial, the City’s 2021 order to comply requires the topsoil to be removed. 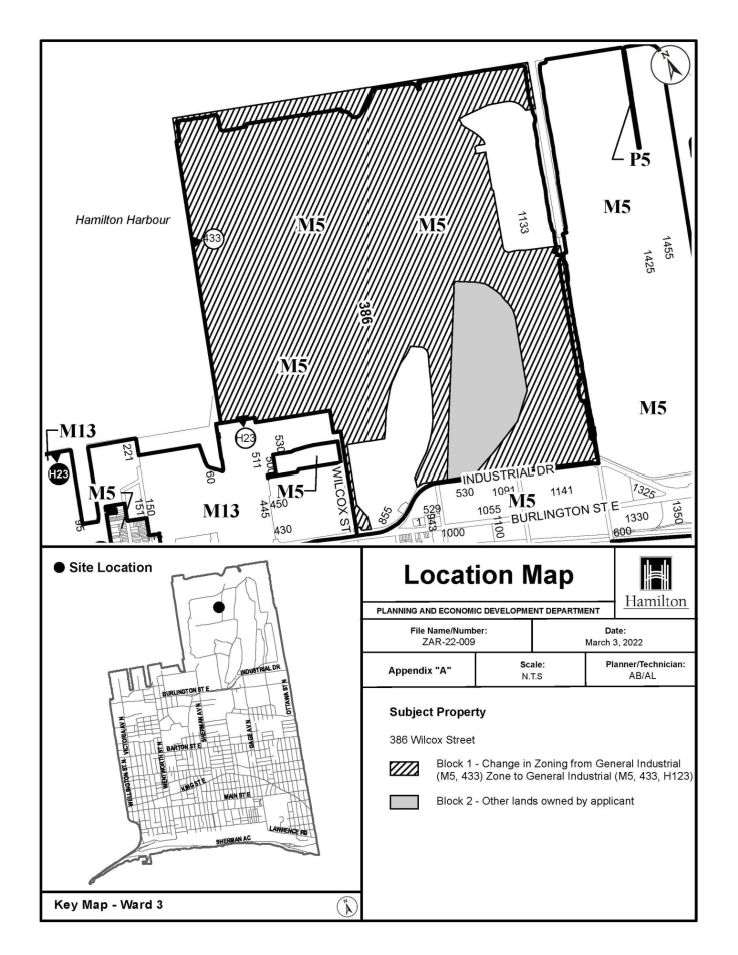 Council is being asked to approve implementing a Holding Provision upon the Stelco Lands to allow the company to being the process of creating a new Master Plan for 287.12 hectares of land which the company hopes to redevelop into a range of uses to be determined.

Stelco will retain 31.78 acres of land which is core to their operations on Hamilton Harbour.

The holding provision is a condition of severance. It effectively “freezes” the land use until the Master Plan, associated studies, and associated plans are complete to the approval of Hamilton City Hall.