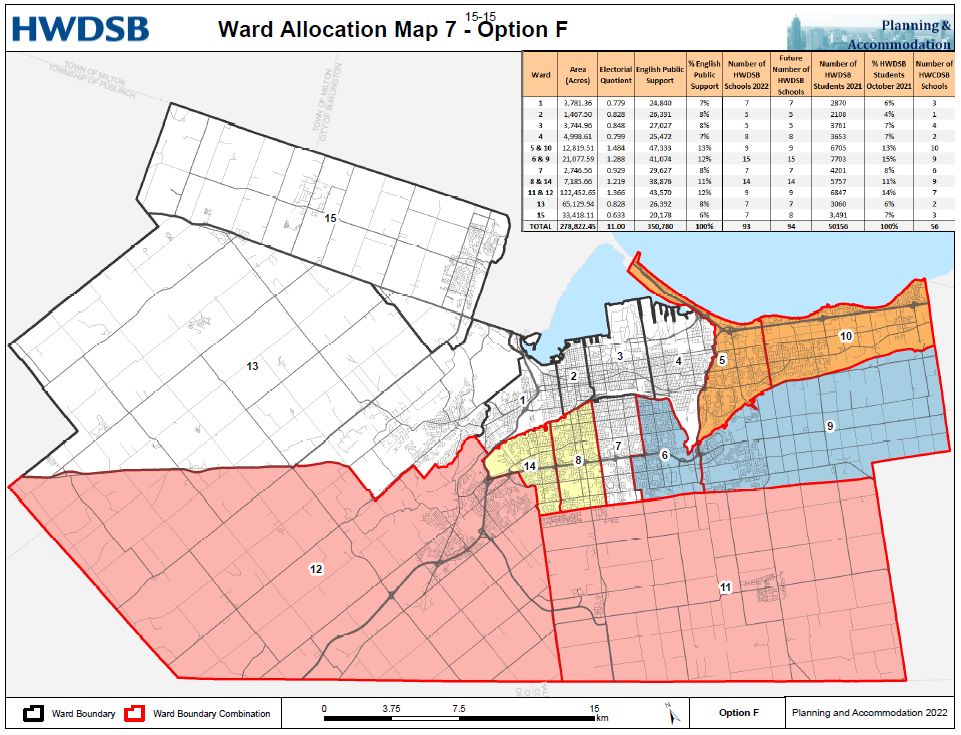 The provincial government of Premier Mike Harris imposed a cap of 11 trustees for the new Board: seven from Hamilton, four from the suburban municipalities which were still independent from the City of Hamilton. (Municipal amalgamation occurred three years later)

Hamilton wards 1 & 2 were merged, with the other six city wards being assigned one trustee each.

The communities of Dundas, Flamborough, and Stoney Creek were each assigned a trustee, and Ancaster and Glanbrook shared a trustee.

The trustee boundaries shifted in 2000 when municipal government amalgamation occurred and shifted again in 2018 when City Council wards changed.

In 2000, the new City of Hamilton was created with 15 municipal wards. To create 11 trustee seats, the HWDSB needed to have four trustees who represented two wards.

In 2018, Ward 14 (West Flamborough) was eliminated, and a new Ward 14 was created on the West Mountain. The HWDSB made Ward 15 a standalone seat, and merged the new Ward 14 with bordering Ward 8. 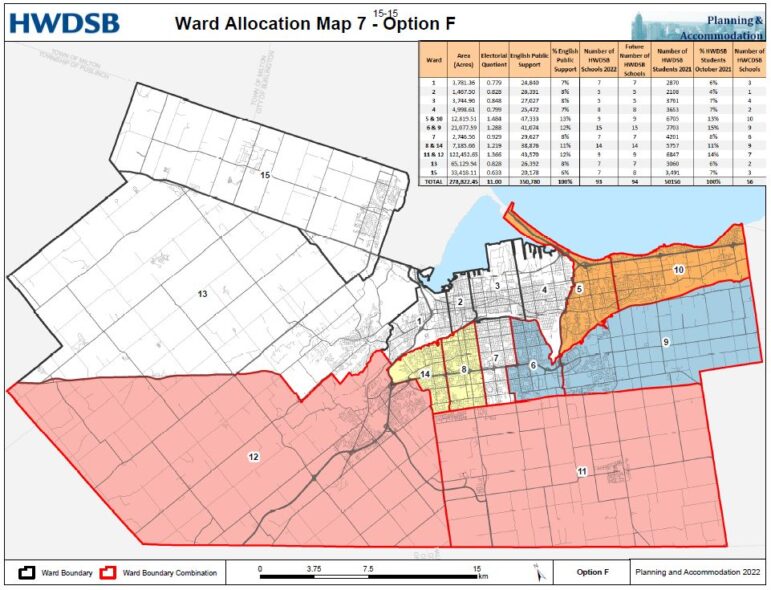 Trustees discussed the challenges of merging municipal wards into large trustee seats and the resulting workloads for trustees who represent large geographical areas or a large number of schools.

The new wards will be sent to Hamilton’s City Clerk. Candidates can register for the October election when nominations open on May 2, 2022.

Background on the history of the City and County Board Trustee

The County allocated its seats by municipality: two for Ancaster, two for Dundas, one for Glanbrook, three for Flamborough, and four for Stoney Creek.

The County had 17 trustees before 1994 when they voluntarily decreased to 12 trustees.

During tonight’s votes, all the final options decoupled Wards 1 & 2, wo distinctive areas with different socio-economic characters.

The merger of Wards 1 & 2 into a single trustee seat made little sense in 1997 with the significant socio-economic differences.

The schools of West Hamilton’s Ward 1 draw students from some of Hamilton’s most wealthy census tracts.

By accident, not design, the trustee who represented Wards 1 & 2 from 1997 to 2014 was a retiree who invested a great deal of time and effort into supporting priority schools in Ward 2.

Ward 1 resident Judith Bishop retired from the Board of Trustees in 2014. B

Bishop repeatedly argued that Ward 2 deserved its own trustee due to its schools’ unique and higher needs.