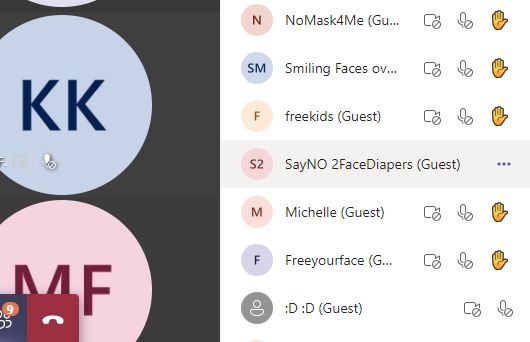 Some observers of tonight’s school board meeting changed their names to various statements against mask mandates.

Freeyourface, No Mask4Me, SayNO 2FaceDiapers, and Smiling Faces over Masks were just some of the statements.

The staff and trustees of the Hamilton-Wentworth District School Board could see the names, much in the way they could read placards if this were an in-person meeting with people sitting in a physical public gallery.

Does using the “user name” function to communicate a political message constitute expressive activity under the Charter of Rights and Freedoms in this era of electronic meetings?

This enjoys Charter protection, as per the Ontario Superior Court in Gammie v. Town of South Bruce Peninsula, 2014 ONSC 6209.

The open meeting regulations in Ontario’s Education Act are similar to the Municipal Act.

Therefore, Gammie is persuasive in the context of school board public meetings.

Mere attendance at an in-person meeting is expressive activity. Politicians change their demeanour when being observed by an audience.

People have a Charter right to attend meetings. They can be removed for disruptive behaviour, and using the name feature to express non-offensive messages does not disrupt an online meeting.

Is the MS Teams’ name feature a platform for expressive activity?

This case is foundational to Section 2(b) Charter challenges against local governments.

It is not the intention of the HWDSB to provide a platform for expressive activity when using Microsoft Teams to conduct meetings.

The video and microphones of observers are disabled. The chat feature is turned off.

People are invited to share their names in the name field. That is its sole purpose.

People using it for political statements does not create a platform.

No disruption, no removal.