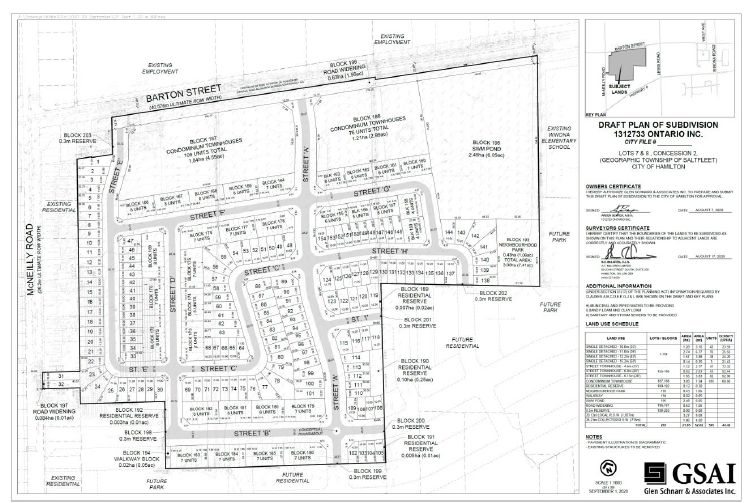 The developers who own the properties at 262 McNeilly Road and 1036 – 1090 Barton Street in Stoney Creek wants wishes to build 545 residential units, being 154 single and semi-detached dwellings, 206 street townhouses, and 185 block townhouses, with the creation of a neighbourhood park, and a stormwater management pond.

They are taking the City to the Ontario Land Tribunal, following planning staff indicating they have concerns with:

Viv Saunders delegated on behalf of the Lakewood Beach Community Council asking questions regarding urban design, why the development is not being designed with pedestrian amenities, and why a low-density use is being proposed along Barton Street when the City of Hamilton needs to intensify.

The Community Council states it wants to see transit-supportive development along Barton Street.

Anita Fabac, Manager of Development Approvals, stated that staff have “shared concern” regarding pedestrian design, and are “not supportive of having a line of fences along Barton Street.”

She states the development is considered to be transit supportive by “introducing a number of different unit types in the range of 545 units. That would bring additional people to the area that are currently not there”

Steve Robichaud, Director of Planning and Chief Planner, states the proposed density of 70.4 persons per hectare, “would be consistent with the [Ministry of Transportation] transit-supportive guidelines.”

“I believe these lands are outside of the built boundary, so they are not subject to the provincial intensification policies,” Robichaud stated.

Robichaud stated staff still need to review the appeal before making a recommendation regarding a potential settlement.

“Based on the density that has been proposed, and the vision that was laid out in the Fruitland Winona Secondary Plan, this proposal is consistent with requirements of both the growth plan and the PPS, as well as the city’s official plan in terms of how new neighbourhoods are to develop.”

He states planning staff will work to ensure good pedestrian-focused design in the development.

Here's some of the context (I've clipped as if I write a note, I will need this video) of what Danko stated at Council today regarding a minimum density development proposal on Barton Street in Stoney Creek. #yhmcc https://t.co/FjTovkRbwq pic.twitter.com/tNAvKIlKaW

Council received the staff information report, it will return for settlement direction at a future date in closed session.