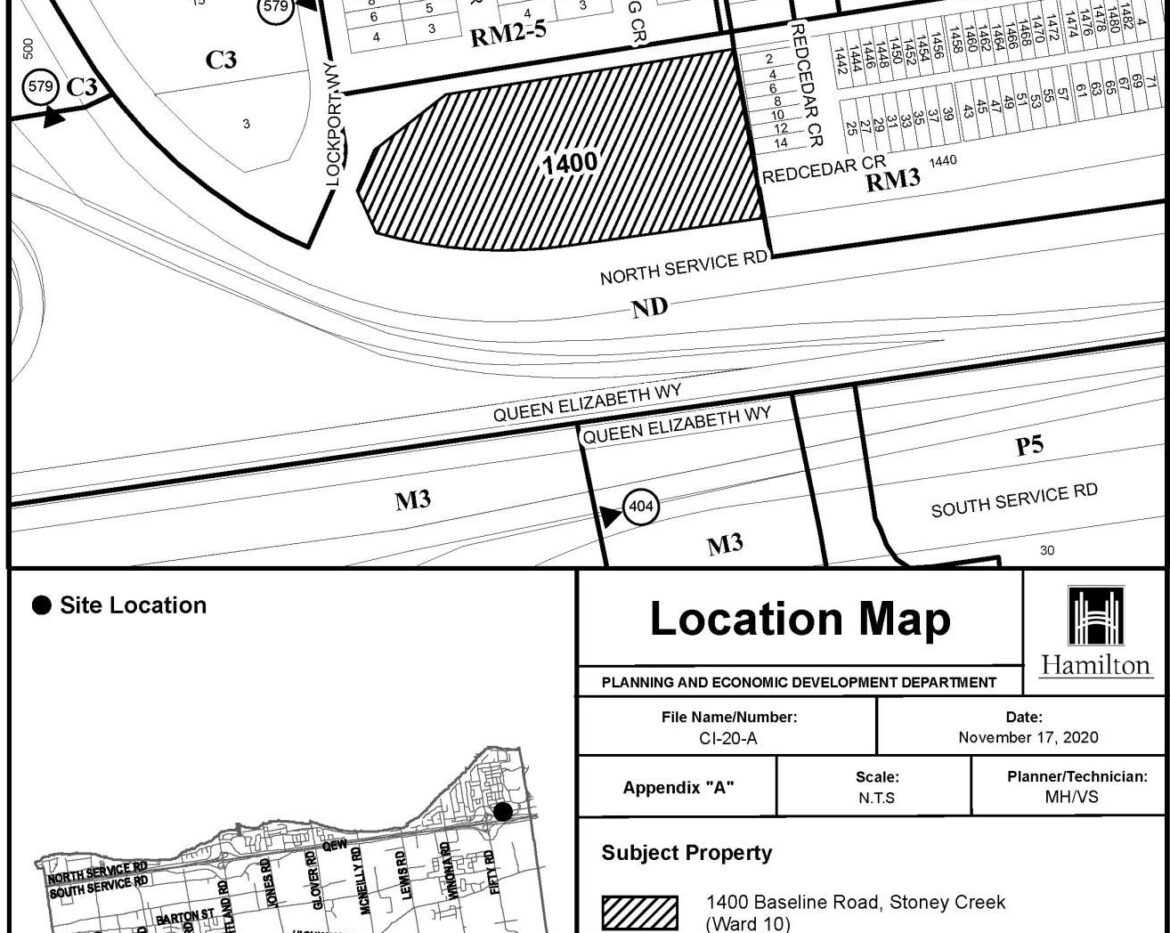 The vote must be ratified at Council on Wednesday, February 9.

The lands are located directed adjacent to the Queen Elizabeth Way highway interchange at Fifty Road.

This change will allow residential development of up to nine-storeys on the 1.17 hectares site with a permitted density of between 50 to 99 units per hectare.

The City plans to sell the lands and place the proceeds of the sale into its affordable housing capital budget.

The City hopes to now gain “north” of $3-million for the property. It is one of 19 city-owner properties identified as being underutilized and marked for potential sale to finance affordable housing projects.

Tuesday’s vote is the end of a three-year process that began in May of 2019 when Council directed staff to make the land development-ready prior to sale.

The process was delayed a year after the City failed to meet its own public consultation requirement in January 2021 after some residents within a 120-metre radius of the site did not receive mailed public meeting notices.

Council’s planning committee originally approved the upzoning on January 12, 2021, but did not ratify the decision as planned on January 20, 2021, after a public outcry regarding the lack of notification.

At the time, Ward 10 Clr Maria Pearson moved for staff to hold a public consultation and return to Council with a new report after considering feedback.

In their updated report, staff state they added urban design guidelines and increased parking requirements to the zoning in response to public feedback.

One of the changes is that if the developer builds a mid-rise building, they will be required to set back 30 metres from neighbouring townhouses on Red Cedar Crescent, the usual standard is 7.5 metres.

“The medium density designation will provide a unique opportunity in this area to provide a mix of dwelling types other than the predominant grade related dwelling types found in the Urban Lakeland Area Secondary Plan,” stated Senior Project Manager Alissa Mahood, the City planner for the file.

“The medium density designation of the secondary plan only permits nine-storey apartment buildings. So we have added a site-specific policy area that will also allow for multiple dwellings, and that would include townhouses, sorry, block townhouses, maisonettes and stacked townhouses.”

Ground-oriented housing remains one of the most profitable building types for developers.

Clr Pearson says the upzoning ensures the City of Hamilton controls potential development of the site, and that leaving it to a future landowner to change the zoning risks an application for more density and height than proposed.

“We want to be sure that we have a defensible development proposal, should a developer come forward and decided to go to challenge, and apply for an intensification, and go even higher and go to the OLT.”

“I’m kind of questioning why we’re not for shooting for higher, much higher,” he stated. “I think it’s  a shift in thinking that’s coming from the Province and from what’s being approved by the province through the Ontario Land Tribunal.”

Nearby residents expressed concerns about the plan.

Tammy Felts, President, Wentworth Common Element Condominium Corp. Which are the townhouses east of the site, say the area is already overcapacity with vehicular traffic.

Viv Saunders, representing the Lakewood Beach Community Council, told councillors, “I believe that rezoning to accommodate a nine-storey portion on this corner lot in Ward 10 will set a precedent and be used as evidence to support other collector local road corner lot development applications throughout the city.”

Saunders said the City should retain the lands to address the housing crisis, especially with the increase of land costs making it harder for the City to purchase land elsewhere for affordable housing.

“Besides accommodating growth, I also strongly believe that we as a municipality should take every opportunity available to us to try to help curb the rising cost of housing.”

Saunders called on councillors to work towards a lower height land use with greater density similar to the mixed-income communities being built at Roxborough Park and the former Mountain Secondary School site.