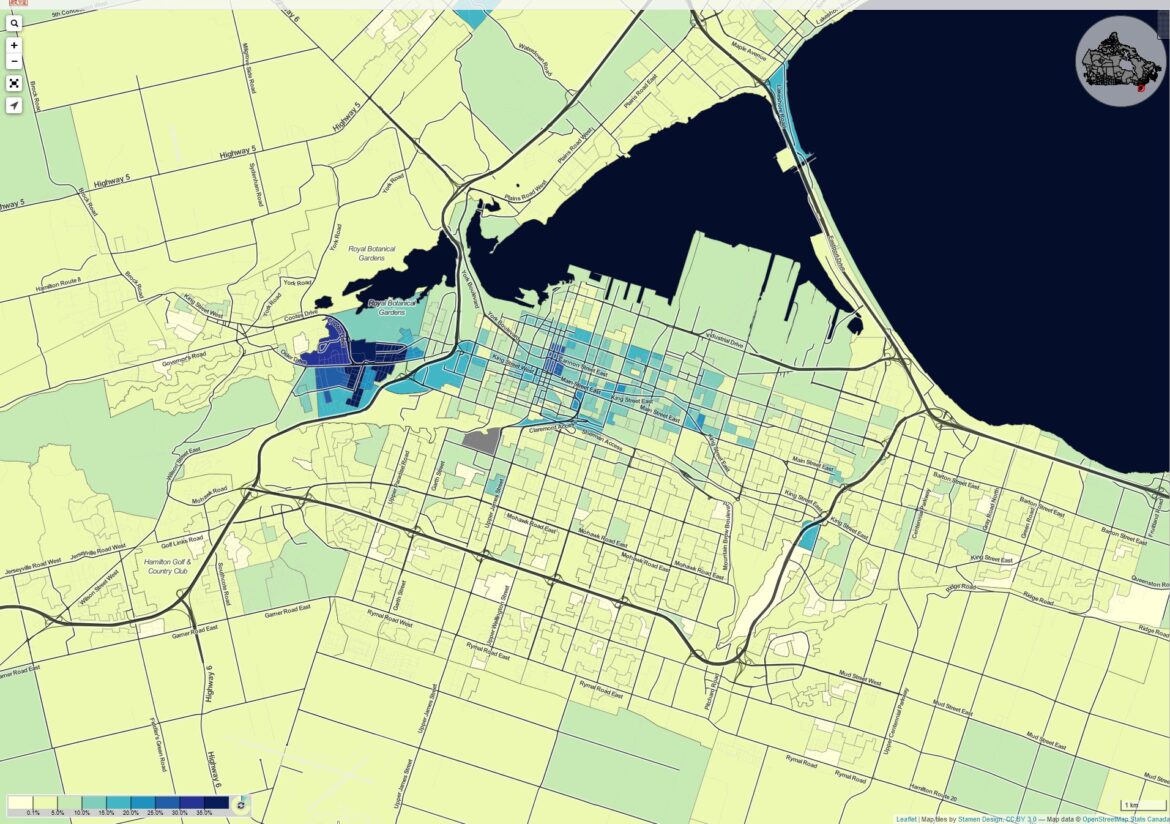 These units are not necessarily empty, some are secondary suites “which owners may absorb back into the main unit for their own use”, others are used for students rentals.

In Hamilton, approximately a quarter of these ‘unoccupied’ DUs are student-occupied housing.

This leaves their Hamilton units ‘unoccupied’ as we can clearly in map visualizations.

Approximately 14 percent of the ‘unoccupied’ DUs are in the neighbourhoods of Ainslie Wood and Westdale near McMaster University.

Another approximately 8 percent of Hamilton’s ‘unoccupied’ DUs are located in dissemination blocks within walking distance of Mohawk College, with most of them concentrated in the area bound by West 5th Street, Fennell Avenue West, Upper James Street, and Mohawk Road West.

There is a pocket of ‘unoccupied’ DUs in the Ancaster neighbourhood where Redeemer University is located.

A dissemination block (35250408002) on bound by Dundurn Street South, King Street West, New Street, and Main Street West contains 141 DUs, of which 40 are not occupied by “usual residents.” The student room rentals (across from the Fortinos Plaza) are the likely explanation for this. 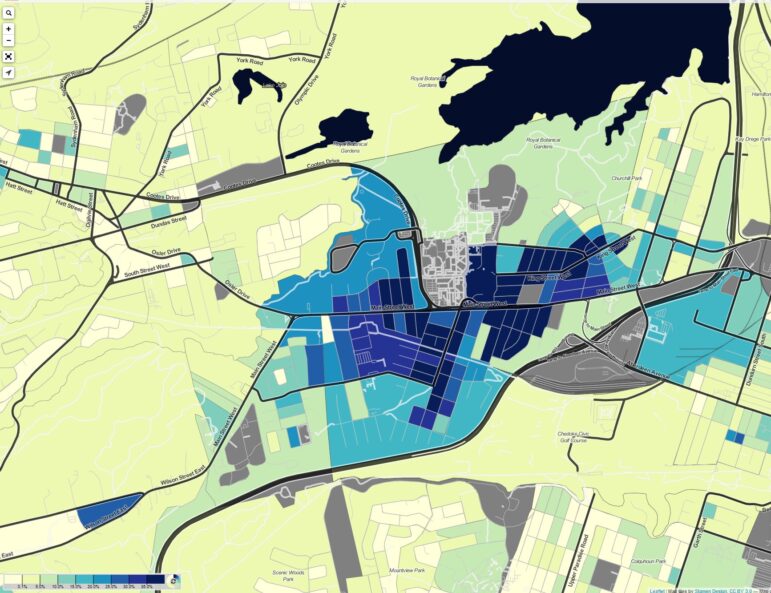 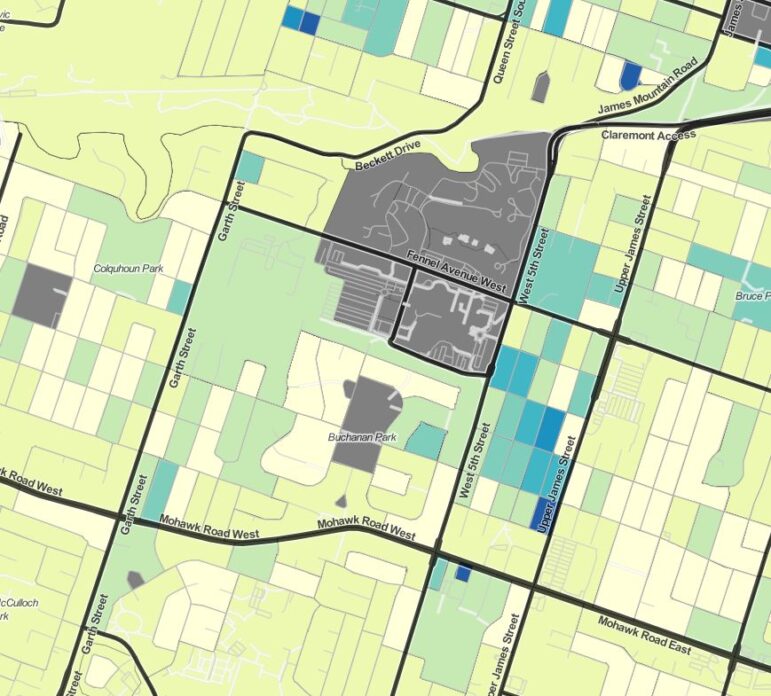 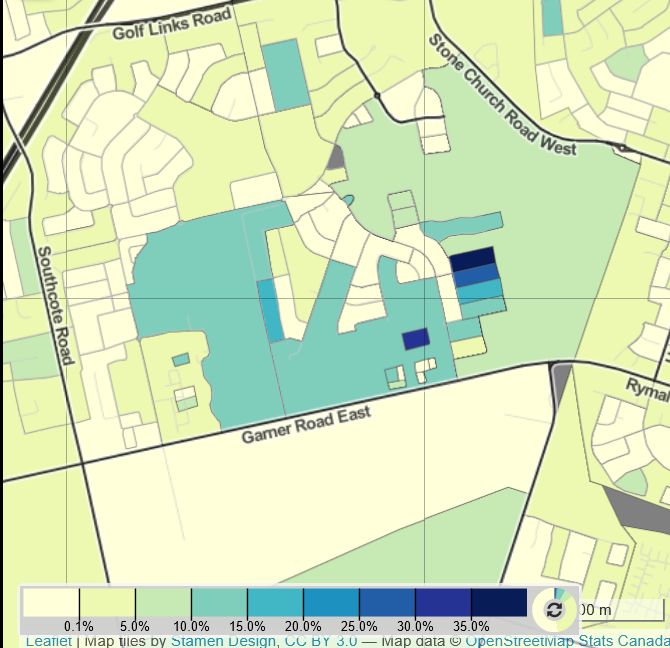 The percentage of “unoccupied” DUs varies across the rest of Hamilton, with no particular trends evident from census data.

Renovation projects create “unoccupied” DUs, such as the Indwell conversion of a former bar into affordable housing at 180 Ottawa Street North. The census registers 22 unoccupied units, creating a 43 percent unoccupied DU rate in its dissemination block.

Occupancy data can be useful to Hamilton City Hall as a tool to compare against their own vacancy estimates.

City staff estimate there are approximately 1135 vacant homes (a different unit of measurement) across Hamilton.  Staff estimate that a 1% vacant home tax on these properties will generate $4.3-million in revenue at a cost of $2.2-million to administer.

Censusmapper.ca provides an interactive map displaying the percentage of “unoccupied units” by dissemination block. (Click here to look at Hamilton) 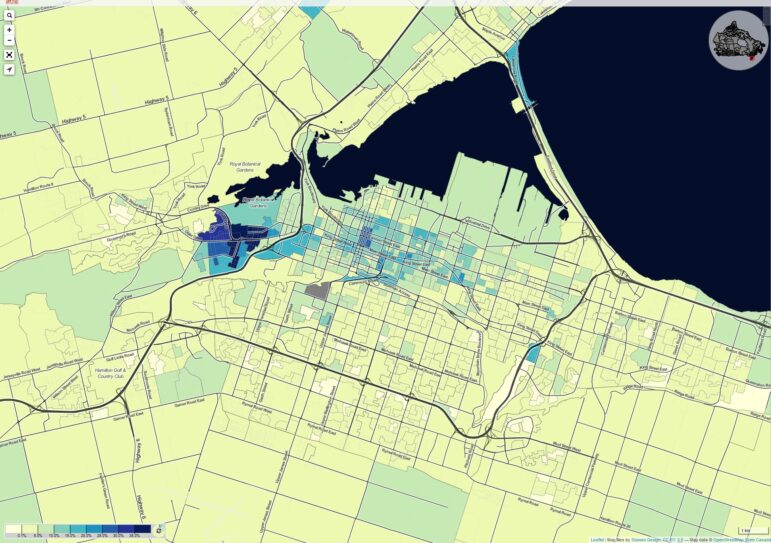 The City of Hamilton must estimate the number of students who live in the areas surrounding post-secondary campuses.

The obvious reason is that municipal ward boundaries must include an estimate of student populations because the Ontario Municipal Board (now the Ontario Land Tribunal) has repeatedly ruled students are a community of interest that must be considered in municipal decision-making. [See: 500176 Ontario Ltd. v. London (City) 27 O.M.B.R. 118, Wiener v. Kingston (City), [2013] O.M.B.D. No. 931, Dobrucki v Hamilton (City) MM170025]