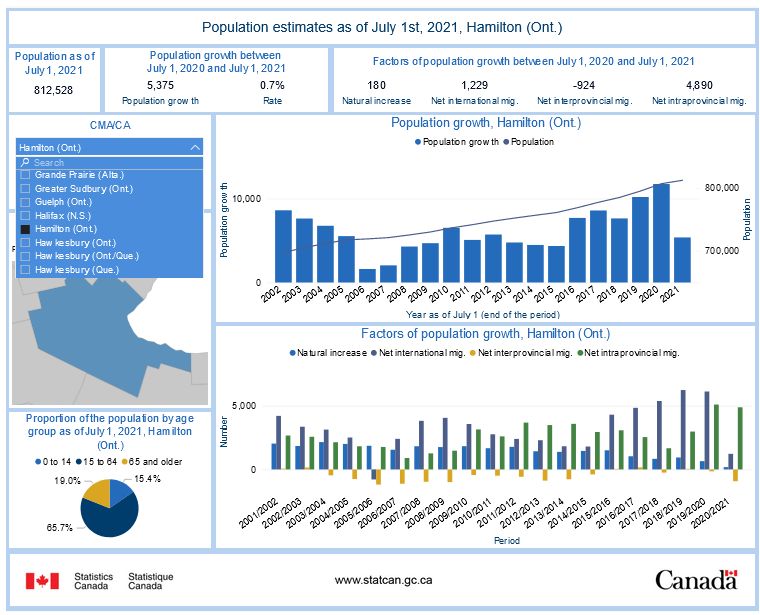 StatsCan offers an interactive data dashboard which shows Hamilton's growth is driven by primarily by immigration (last year excepted), which has increased in recent years as well.

The surge of Torontonians becoming Hamiltonians is not your imagination, Census 2021 data released by Statistics Canada during the past month shows people moving from the Greater Toronto Area into Hamilton is increasing each year.

Data released in January showed nearly 5,000 people moved to Hamilton from other parts of the GTA between July 1, 2020, and July 1, 2021.  The Census metropolitan area data is available here, Hamilton’s CMA includes Burlington and Grimsby.

The surge of GTA arrivals began prior to the pandemic and continued into 2021.

Immigration had been the largest segment of Hamilton’s population growth, but due to pandemic border restrictions, immigration to Hamilton was limited during the first year of COVID.

StatsCan offers an interactive data dashboard which shows Hamilton’s growth is driven by primarily by immigration (last year excepted), which has increased in recent years as well.

The census’ age demographic data shows many of the new arrivals are in their child-bearing years and they are having children. School boards will use this data to project future enrolment and determine where schools need to be located.

The visualization shows the importance of international students to Hamilton’s population growth, especially during the past decade as international enrolment has increased at both secondary (Columbia College, Southern Ontario College) and post-secondary (Mohawk College, McMaster University) in Hamilton.

The effect of the two secondary schools is clearly visible in the 2019/20 components of population growth graphic showing a large number of international students (orange) arriving in their late teens.

New arrivals from elsewhere in Ontario (green) data shows most are in their mid-20s to early-40s in age. 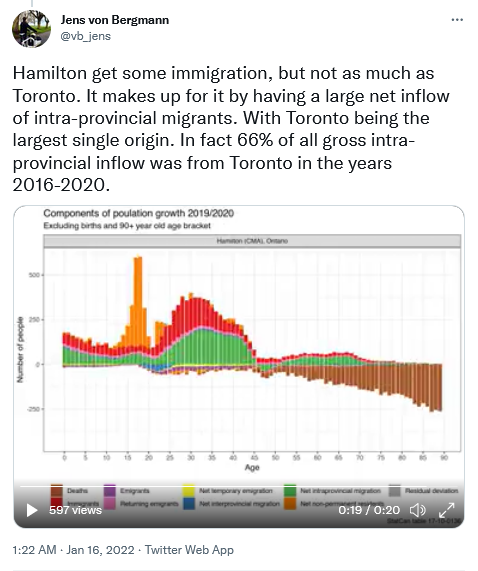 Housing Affordability as the Primary Driver

Ryerson’s Centre for Urban Research and Land Development details with data that it is “affordability issues, not the pandemic” which is driving people to leave Toronto and Peel Region. CUR states that while “Toronto and Peel region had more net loss of population in 2021 than in 2020.” That “once again this is the continuation of a longer-term trend and not unique to the pandemic period.”

CUR’s data analysis shows people are leaving Toronto and Peel for more affordable regions, with Durham and Simcoe counties the most popular destinations. 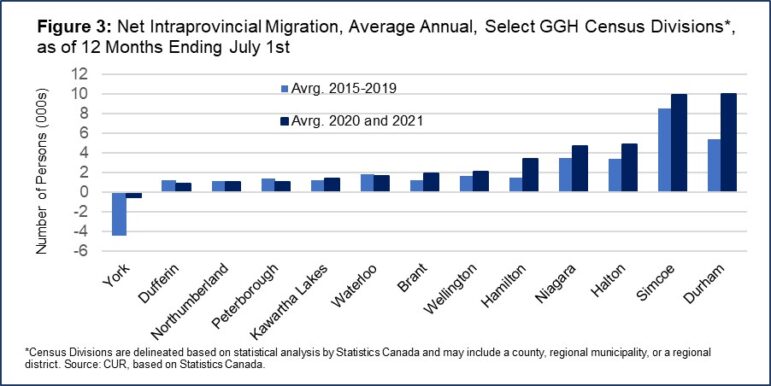 Reuters on the “exodus” from Toronto, noting the rise of remote work as a reason for accelerating migration out of Toronto. https://www.reuters.com/world/americas/so-long-toronto-covid-19-pandemic-hastens-canadas-urban-exodus-2022-01-13/

The Globe and Mail https://www.theglobeandmail.com/business/article-toronto-montreal-populations-decline-as-urban-exodus-accelerates/ quotes a Hamilton realtor stating Hamiltonians are being displaced in the housing market.