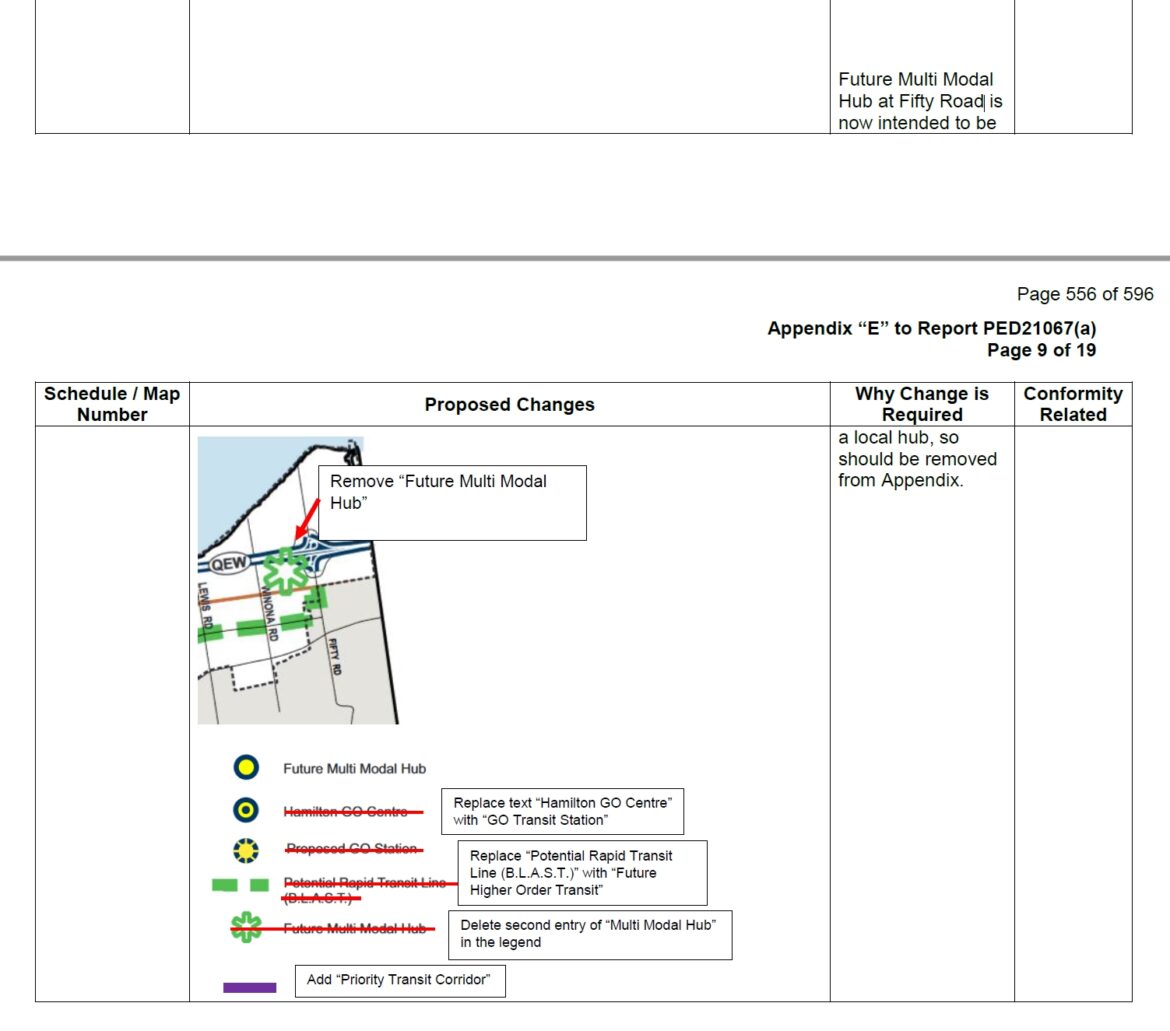 Here’s a brief on why and what it means.

Metrolinx built its Stoney Creek GO rail station at Centennial Parkway. The City of Hamilton expected it would be at Fifty Road. No rail means no multi-modal connections.

What It Means for Transit

UHOP continues to show plans to build higher-order transit along Highway 8 in Stoney Creek which will have a terminus in the vicinity of Fifty Road and Barton Street. This is likely a decade away at least.

Metrolinx is building a commuter rail station at Casablanca Blvd and the QEW in Grimsby.

This effectively means Casablanca will be the transit hub for Winona and Grimsby. Hamilton’s public transit will eventually need to operate to this GO Station to provide connections to eventual Niagara public transit when that service eventually connects to the station.

What it Means for Density

The higher densities being built along the QEW will continue to be built.

The Provincial Policy Statement and A Place to Grow: Growth plan for the Greater Golden Horseshoe require intensification in the Greater Toronto-Hamilton Area.

People are buying residential units with quick access to the 400 series highways. Developers will keep building.

Even now, when planners reference future higher-order transit in this area, it is a fig leaf. We all know the City of Hamilton has no actual plans to expand transit in Winona and that new residents will be driving as their primary means of transit.

[The Hamilton Cycling Committee, a citizen advisory group, is trying to hold the City to its cycling master plan and is asking the City to add bike lanes to roadways in Winona.]

Eventually, the City of Hamilton will be forced to run a bus between the lakeshore Winona area and the Confederation (Centennial Parkway) GO Station, with buses continuing to the Eastgate LRT station.

What the City Could Do Better in Communicating on Planning

Stoney Creek resident, and one of our best Council watchers, Viv Saunders points out the removal of the multi-model hub designation comes a month after the City’s planning staff recommended approval of a higher density development at 1290 South Service Road and 5 and 23 Vince Mazza Way near Fifty Road.

Staff cited this very transit designation as one of the reasons favouring approval!

I do not know why Council was not told this change was imminent. While I lean towards blaming silos within the bureaucracy, a more plausible explanation is due to COVID, the chatter various planners have over coffee and lunch is not happening – thus siloing.

Not that it matters for the public. People can reasonably look at this and ask if it would make a difference.

Does it Make A Difference?

Betteridge’s law of headlines applies here, the answer is no.

Returning to provincial planning policy requires density, and as much there is more traffic than a few years ago, from a planning lens, existing highway access means there is sufficient capacity for development.

As millions of people are added to the GTHA, traffic will worsen, unless politicians begin prioritizing transit. Let’s face it, there are no ribbon cuttings for adding buses to Winona. In fact, people will be furious at the tax increase to provide those buses. That is a note for another day.