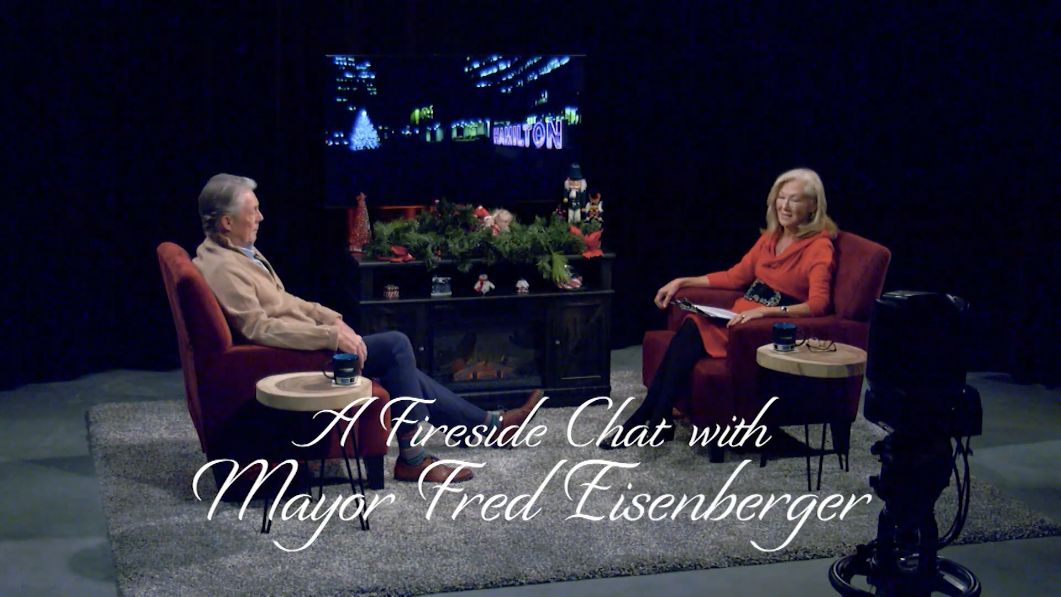 Mayor Fred Eisenberger during his 2021 end of the year address in a fireside chat format.

Hamilton Mayor Fred Eisenberger says he is “definitely up” for seeking re-election because he is “very, very optimistic for the future of our city,” conditioning his enthusiasm by saying, “am I going to run again? That is an open question.”

The Mayor’s remarks came during his end-of-year message, conducted in a fireside chat format, posted to the City of Hamilton YouTube channel this afternoon.

Mayor Eisenberger praised the work of City Council, City Manager Janette Smith, the City’s Senior Leadership Team, and City of Hamilton staff whom he credited for responding effectively to the pandemic and many social challenges in the community.

“It’s been particularly challenging through this pandemic; it really has accelerated some of our social challenges in all of our communities, whether it’s here or right across the country,” Eisenberger stated. “The housing issue, with house pricing going up thirty percent year-over-year, has been particularly challenging as well for those that are trying to get into the market or get, you know, affordable rents. And that’s not something that municipality can actively control.”

The Mayor says the City of Hamilton is increasing its spending on affordable housing and homelessness.

He discussed his childhood experiences in geared to income housing.

“I grew up in gear to income housing, in the east end of the City of Hamilton, and it was the kind of hand up that that helped our family get to be in a better place for all the kids and children, which is the aspiration of every immigrant family that comes to our country or our town,” Eisenberger stated.

“I’m a huge believer in providing that kind of hand up and assistance and support for everyone in our community to the best degree possible.”

On homeless encampments, Eisenberger says, “unfortunately, tents are not safe and secure environments for people to be living in,” and that the City is “doing everything possible on a day to day basis working with those individuals, to try and get them into safe and secure locations or a roof over their head.”

“We have a significant amount of staff that are working on this every day. And that is work that is not going to stop.”

Eisenberger praised the City’s response to COVID and vaccination roll-out.

“The roll-out in terms of getting [vaccines] into the arms of individuals on a localized level, has been a massive, massive effort,” he stated. “There’s a book to be written about what cities had to do and what public health institutions had to do, what our hospitals needed to do to protect citizens in our community. They have done such an amazing job.”

Eisenberger spoke about his decision to step off the Police Services Board, stating he did so “purely and plainly” for “diversity.”

The Mayor says he will decide on re-election in the coming months.

“‘m very focused on pandemic and booster shots and vaccinating our kids, getting all that work done to make sure it gets done effectively and helping to continue to promote our post-pandemic economic recovery.”

“That is going to occupy certainly my time in the next two or three months, but some time and then, you know, the early early next year. I’m going to have to make a decision, and I’ll let you know.”