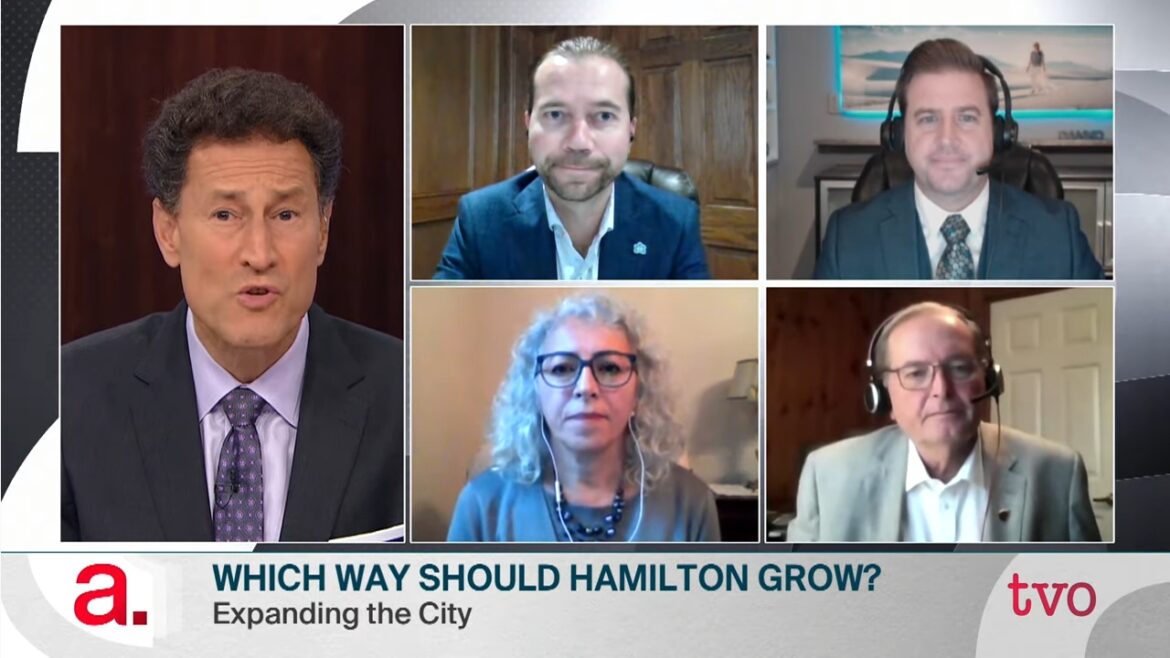 Screencapture of TVO's The Agenda

“I’m still listening to that issue. Clearly, there’s two sides on this issue, two very strong [sides] … I’m going to continue listening. I’ve heard loud and clear from the No side. But I’m starting to hear a lot more from the Yes side.”

“No, I think we need to take a firm line and stop the growth pattern of sprawl development,” Danko stated. “I think we need to grow up, not out.”
A discussion of the issue followed. You’ve likely heard most of the points already.

Mike Collins-Williams, CEO of the West End Homebuilders Association, brought their Nanos Research survey into the discussion to argue a large segment of the public favours an urban boundary discussion.

A few minutes later, Ferguson opened up a discussion stating:
“The thing that troubles me the most is when I drive around, look at this perforation of signs, and there is a lot of them “Stop Urban Sprawl,” they’re on single-family homes. So they have their dream home, but they don’t want the future to have theirs.”

Lily Noble of Stop Sprawl HamOnt responded, “Yes, a lot of them are sitting in single-family homes. You won’t see them in apartments because apartments are too high up to see our signs.”

If you are reading this blog post, you are likely familiar with the discussion points. The last five minutes illustrate well the dynamics of the public opinion debate.

[Click here to start watching just prior to Ferguson’s comments on the signs.]

In the middle of the segment, Collins-Williams was asked about intensification in Ancaster.

His answer to the question lays out the challenges of planning policy and politics in the Greater Toronto-Hamilton Area.

I’m going to quote it fully [click here to watch]:

“I’m empathetic to both Councillor Ferguson and Councillor Danko. Local control over planning is difficult. Fundamentally, they represent constituents, typically whom are homeowners rather than renters, who typically don’t like much change in their neighborhoods.
This is one of the most difficult things within planning.
The irony of this debate is, I think. the only thing that people hate more than sprawl is intensification.
And Almost every single application comes down to a political vote at Council.
This makes the intensification targets that the City has set through both the Ambitious Scenario or a No Boundary Scenario extremely difficult to achieve.
Our members are certainly building high-density intensification projects along transit lines and trying to build Missing Middle housing within existing communities.
But the Missing Middle, is well, it’s missing.
We have exclusionary zoning policies in Hamilton, and for that matter, right across the GTA.
In the City of Toronto, what’s been termed the yellowbelt, where only single-family homes are allowed to be built, and that covers most of the geographic area of the cities across South Central Ontario.
This makes the politics around intensification extremely difficult.
I’m not saying that our members are not up for continuing to intensify and build transit oriented housing.
But the fact that every single project comes down to a vote at Council. That’s a very difficult way of building the [one] million houses that are going to be required across the province of Ontario over the next decade to meet the very significant population growth that has actually been accelerating the past few years.”

Hamilton City Council will debate the urban boundary expansion issue during a special meeting on November 9. (This meeting was originally scheduled for October 25)