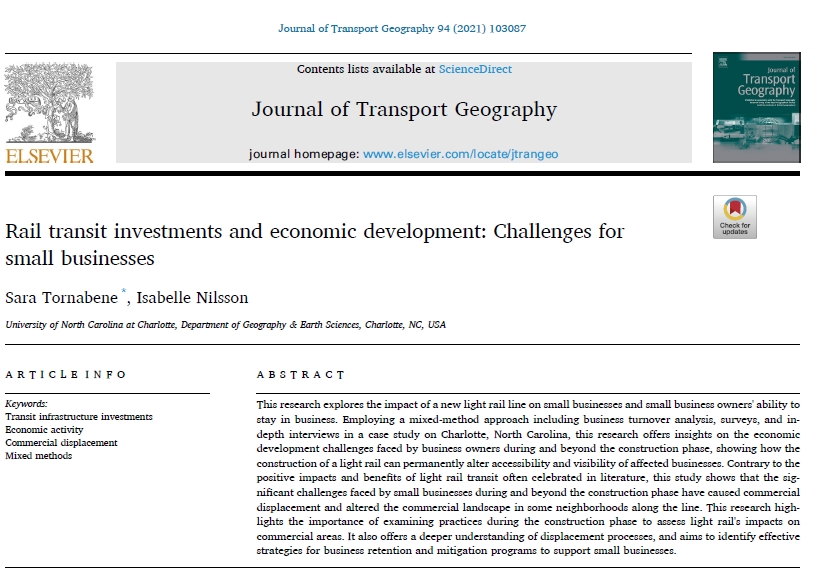 A recent academic research article in the Journal of Transport Geography looks at the impact of a new light rail line upon small businesses in Charlotte, North Carolina and finds:

“Contrary to the positive impacts and benefits of light rail transit often celebrated in literature, this study shows that the significant challenges faced by small businesses during and beyond the construction phase have caused commercial displacement and altered the commercial landscape in some neighborhoods along the line.”

The article is behind an academic paywall. I have not found a pre-print version online.

This study researched the economic impact upon small businesses of a new LRT line in the North Tyron commercial district of Charlotte, North Carolina. The extension to the Lynx Blue Line opened in 2018.

A couple of key points I noted from the piece follow.

Commerical closures: Interestingly, the study compared business openings and closures between the LRT construction zone and another commercial corridor in Charlotte.

Following completion of the LRT, there were business closures including “One of the staples of the neighborhood, a retail store located 400 ft. from the Tom Hunter station and called the Famous Mart, lamented a loss of 75% of sales volume over the five-year construction period. Even though they had already undertaken drastic measures – such as reducing salaries, cutting employees’ hours, putting stuff on sale – the store closed at the beginning of January 2020 after more than 30 years in business in that location.”

An automotive services shop closed after the opening of the LRT.

I’ll note that one of the most vocal opponents of Hamilton’s LRT project is a menswear shop on King Street West which will the traffic flow into its parking lot changes after construction and will be impacted by road closures for construction.

The report researchers include quotes from other businesses experiencing increases in traffic and sales following the opening of the LRT.

Construction challenges: The study authors include many direct quotes from business owners and managers describing the impact of construction. They describe the difficulties caused by road closures and resulting decreases in businesses due to customers not being able to access businesses easily.

Construction Communications: Two paragraphs from the researchers capture the failings of communication.

“Business owners’ perception of the effectiveness of those strategies was mainly negative. Among the interviewees, five were not even aware of the existence of the Community Relations Program.”

“The business owners who received communications on the project’s timeline claimed that that information was provided inconsistently and sometimes did not relate to the construction timeline, rather to beautification strategies.”

Obviously, Metrolinx and the City of Hamilton need to ensure they communicate to everyone on the LRT corridor and that communication is accurate.