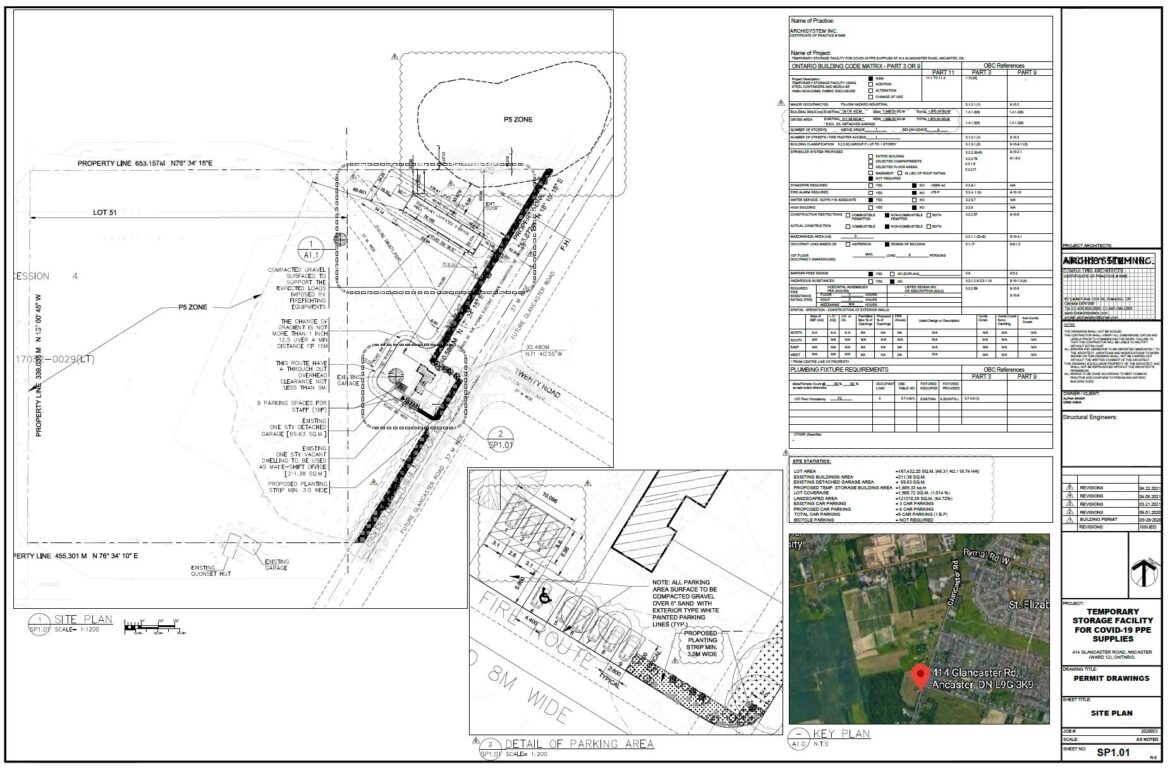 Hamilton’s Committee of Adjustment denied a “minor variance” request to permit the construction of a “temporary building” at 414 Glancaster Road to store COVID supplies by a private corporation.

Despite discussing the violations during the meeting, committee members state the City needs a complaint to act. At the end of the hearing, the acting chair expressed a desire for someone to file a complaint.

Jonathan Benczkowski, representing the owner Alpha Group, argued the temporary structure is “in the public interest” as they will be storing “COVID relief supplies” in the building.

The property’s current zoning does not allow the proposed structures as permanent buildings. This requires a zoning amendment.

Committee members were skeptical that the proposed buildings would be temporary.

“On a temporary basis if the structure is allowed, what happens at the end of two years if it’s not renewed, you know, will the structure be taken down? Will all the gravel that was put on site be removed and put the site back to the state it was before you started all this operation” stated committee member Melvin Switzer.

Benczkowski stated the owner intends to get permits for a permanent development of the site during the next two years.

“If after a two year period, we’re not to have a concise development, I guess the two options would be to come back before the committee today for an additional time because, as we know, development does take time, or if the owner at that point chooses not to proceed with it, it would be to remove it, and I would assume we bring it back to a state that previously was,” stated Benczkowski.

Switzer says the property owner is installing utility lines similar to that used for a permanent structure near the proposed temporary buildings.

“The first problem is, you’ve gone ahead with some construction here without any permits at all,” stated Switzer. “Containers are classified as a structure once they’re placed on the ground because they have they are not mobile.”

“I also visited the site yesterday, and I was surprised at the size of it. It’s not like we’re giving somebody the okay to go ahead and put a temporary garden shed in the backdoor yard,” said member Leverne Gaddye.

He described all the work already done on the site without permits.

“It sure concerns me that somebody would take the liberty to go ahead and build all of this without a permit,” he continued. “I’m a little skeptical of somebody telling me, ‘Well, it’s a temporary building,’ and we’ll take it down, or we’ll do whatever in two years.”

After the vote, the committee members discussed the existing illegal containers they discovered.

“Does that mean that those structures have to be removed?” asked member Nancie Mleczko.

“I don’t think there’ll be moved unless somebody calls and complains,” noted member David Serwatuk. Enforcement is “on a complaint basis,” he noted.

Members asked the City staff member who coordinates CoA meetings if they inform the by-law division of violations discussed in meetings.

The staff member stated they do not.

Switzer, the acting chair of CoA, encouraged someone to file a complaint.

“Any concerned neighbours that are listening in, you can follow up on that by phoning by-law.”