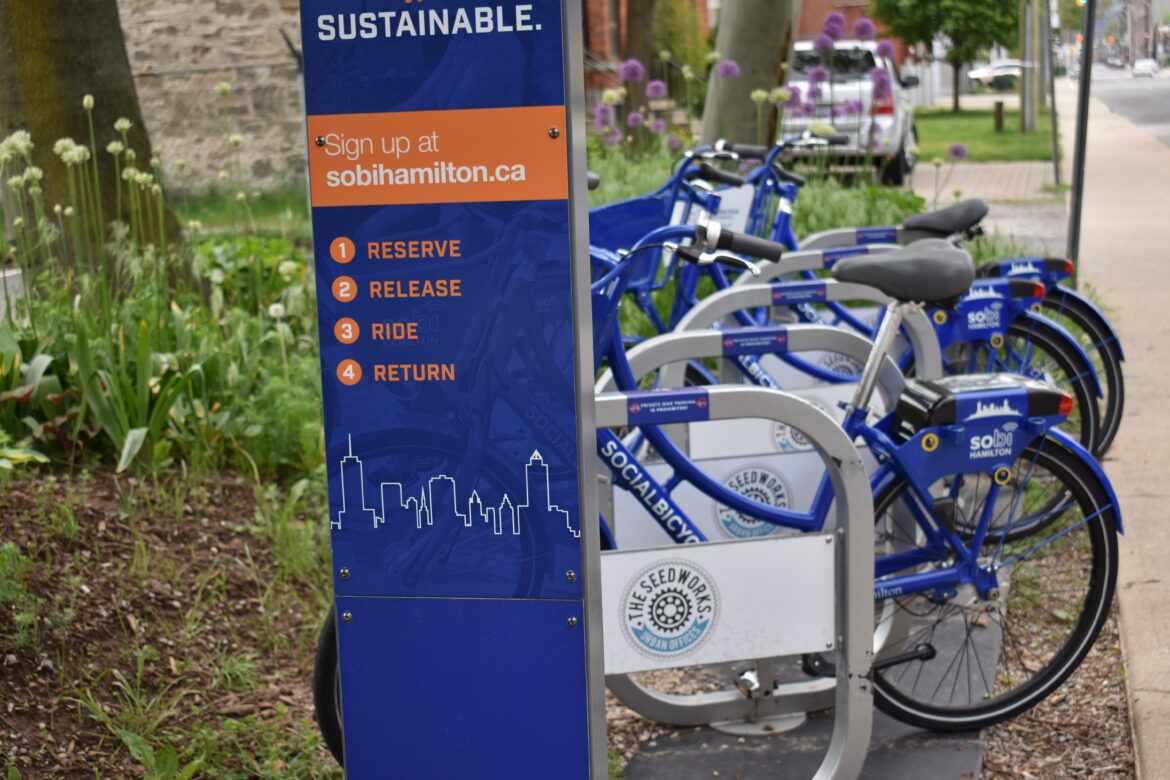 The Hamilton Bike Share Hub at their 126 Catharine Street North Headquarters (Disclosure: The Public Record is based in the same building)

Hamilton Bike Share may get more bicycles to add to the fleet if City Council approves spending $50,000 to ship the bicycles from Portland.

The bikes were used by Portland’s bike share system before an upgrade last year when Portland switched providers and replaced their entire fleet with electric-assist bicycles.

Over the years, Hamilton Bike Share has ordered 900 bicycles, some of which are no longer in the fleet.

The hope is to get 600 of the used bicycles from Portland, and add the best of them to the Hamilton fleet.

“It is a great opportunity for enhancing the system and reducing waste by collaborating with another city,” says Hamilton Bike Share Inc Executive Director Chelsea Cox.

The bikes will need inspection, repairs, and it is expected that some of the bikes will not be fit to return to service. Working parts from those bikes will be used to repair other bikes.

Cox says the “new controllers are on order for the fleet (900 total), so that would cap the maximum number of in-service bikes at this time”.

The expanded fleet will enable Bike Share to provide a better service.

At present, the service area is larger than what is recommended as a best practice for a fleet of the present sizes. During large events, such as Canada Day fireworks at the Bayfront or the Arkells concerts at the civic stadium, the fleet ends up fully used, with large pockets of the city having no bikes remaining in the area.

Based on the timelines for shipping, modification, and repainting, the bicycles will likely enter service in spring 2022.

“Hamilton Bike Share is enthusiastic about growing the service area as we’re able. We currently serve over 25 square kilometers of the city, and plan to expand the service as we’re able to gain the equipment and funding necessary for such growth”, says Cox. “Together with the City, we continue to explore grants, partnerships, and other opportunities to set the operations up for long-term sustainability and growth.”

While Hamilton Bike Share has expressed a desire to expand the service area, an expansion is dependent upon finding new sources of operating funds. The improved density of bikes in the existing area should help to improve membership and decrease the cost of re-balancing the system after events.

The bicycles are owned by the City of Hamilton, with the non-profit operator responsible for maintenance, repair, and operations.

Council will decide upon this proposal next week.