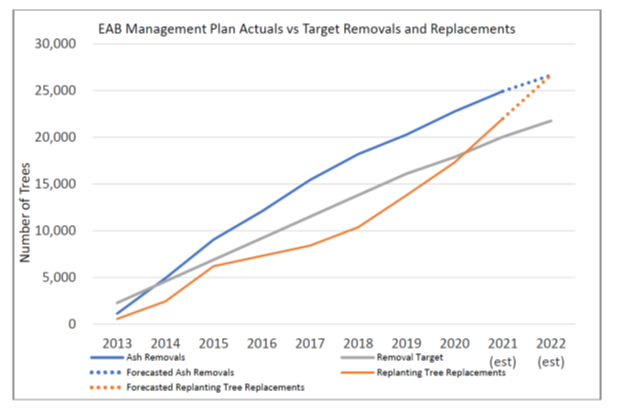 The City of Hamilton is now in year nine of a ten-year plan to remove Ash trees which are being devastated by the invasive Emerald Ash Borer species.

The Borer’s destruction of trees creates a hazard when the trees die and fall. Council voted in 2012 to begin removal of an estimated 23,000 trees and replacing all of them with new trees.

During the past eight years, 22,616 trees have been removed. Approximately 3,800 Ash trees remain to be removed. During the more detailed inventory as the City moved throughout Hamilton, more Ash trees were found than expected.

Caleb Gibbons, Senior Project Manager – Capital Projects Forestry And Horticulture, writes in their annual report that no budget increase is required for the additional trees and the project remains within its ten-year budget.

With tree removal mostly complete, forestry crews are now focused upon planting replacement trees. 17,171 replacement trees have already been planted; the City plans to plant 5,445 in 2021.