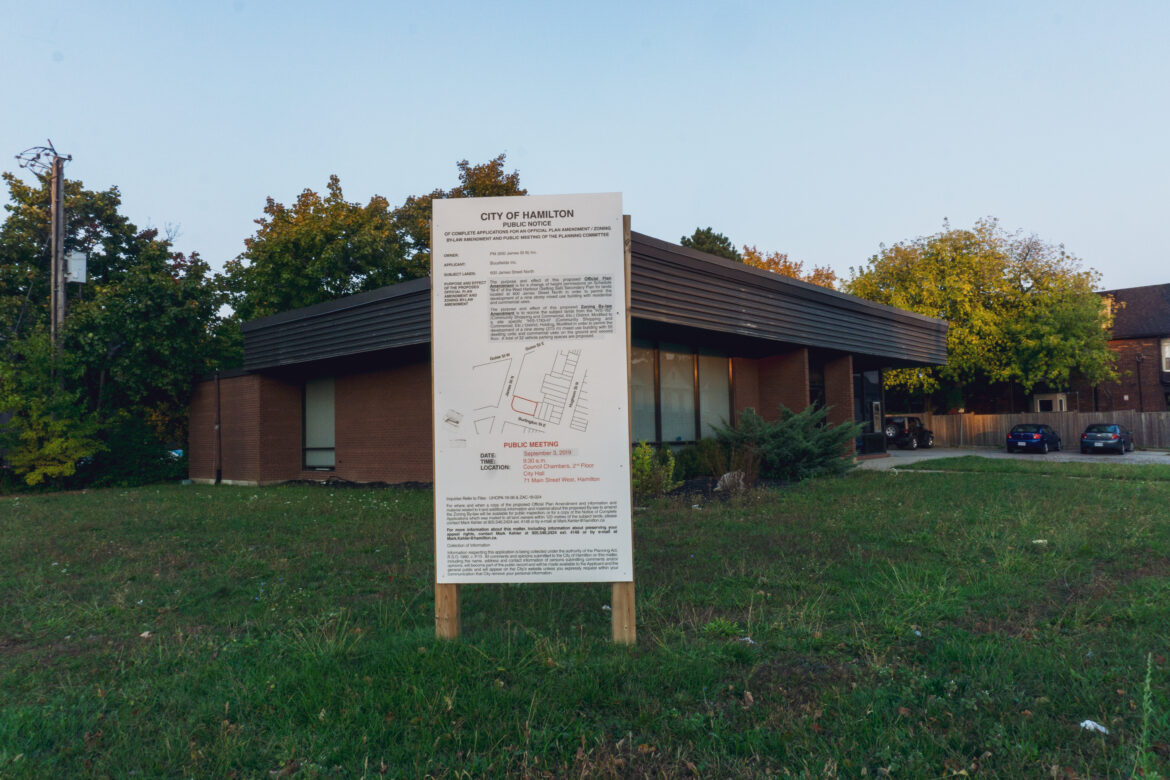 In September 2019, Hamilton City Council denied a planning application for a nine-storey mixed used development on the northeast corner of James Street North and Burlington Street. As proposed, the mid-rise building would have 60 residential units, 134 square metres of retail, and 33 parking spaces. Ward 2 Councillor Jason Farr strongly opposes the development, stating that nine-storeys is too great a density for this particular location as it represent “an over intensification of the site and does not conform to the West Harbour (Setting Sail) Secondary Plan”.
Hamilton’s Chief Planner Steve Robichaud recommended approval of the proposal, writing “the proposed mixed use building maintains the intended retail function of the James Street North corridor and represents an appropriate level of intensification at this location that respects the scale and character of adjacent development”.
Council voted 11-4 against the proposal. With the City’s planning staff on the record supporting the development, Farr moved to authorizing the hiring of outside planners to defend Council’s denial at the Local Planning Appeal Tribunal.
As expected, the developer appealed the decision to LPAT.
The first case management conference for the appeal was held by video on September 11, 2020. The Tribunal approved Harbour West Neighbours Inc. as a Party, alongside the developer and the City of Hamilton. Council is represented by Brian Duxbury of Duxbury Law at the hearing. The developer, J & B Developments LP, is represented by Denise Baker of WeirFoulds. Harbour West Neighbours Inc is represented by Herman Turkstra.
Nearby resident Elizabeth Poynter applied for Party status in the hearing, the Tribunal declined to grant her Party status, and named her as a Participant. Poynter did not intend to present evidence or call witnesses, thus her request was better suited to Participant status.
Participants in the hearing will be Elizabeth Poynter, Tracy Geddes, Carlos and Amelia Catarino, Susan Tesluk, Barbara Johnston, Amy Rolfe, Joanne St. Amand, Kevin Abbott, Wade and Cheryl Hicken, Tony Blanken, Joanne Lederer, and John Price. Participants are limited to written statements to the Tribunal.
The hearing will occur beginning on Monday, February 8, 2021 and run until Wednesday, February 17. The public can listen to the hearing by teleconference, information on how to do so is included in the LPAT decision setting the dates.
The parties are directed to spend the months prior to the hearing in negotiations regarding witnesses, materials, and to attempt to settlement some matters in the appeal prior to hearing.