The Hamilton Community Legal Clinic issued a open letter today expressing their concerns about the action of City Council on Wednesday in making a quasi-judicial declaration that LGBTQ Advisory Committee Chair Cameron Kroetsch violated the Municipal Freedom of Information and Protection of Privacy Act (MFIPPA).
The HCLC describes Council’s actions as “a heavy-handed, public, and unnecessary response that targeted a prominent member of the Queer community” and warn “the effect of these actions will undoubtedly make other members of the Queer community question whether they ought to participate in City processes or speak up on issues for fear of being targeted themselves”.
Kroetsch made public minutes of the LGBTQ Advisory Committee which Hamilton City Clerk Andrea Holland claims violate privacy laws. Holland has not responded to multiple requests from numerous individuals for her reasoning report. Section 7(2)(k) of MFIPPA requires her to provide her reasons. 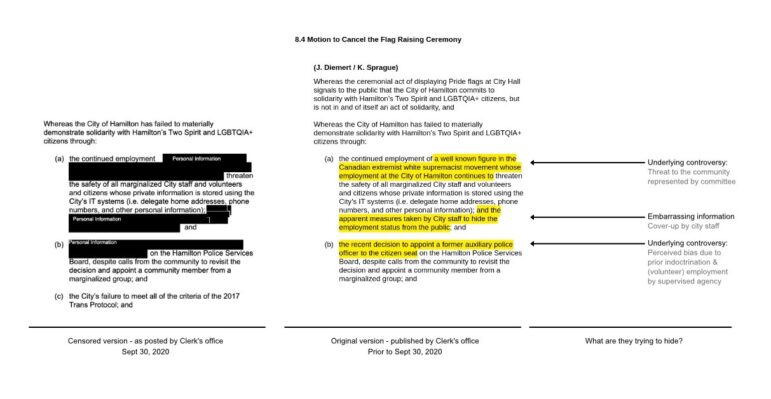 The alleged serious violation of MFIPPA is show in the graphic below produced by a Hamilton resident. City Clerk Holland did not inform Ontario’s Office of the Information and Privacy Commissioner of the matter.
HCLC’s letter notes serious errors of law which raise even more questions about the legality of the investigation than have already been raised.
“There is also the issue of the Integrity Commission’s enabling By-Law No. 16-288 (as posted on the City’s website), which does in fact omit any mention of the ability of the Integrity Commissioner to investigate anyone other than members of Council. While the Municipal Act does require a Code of Conduct to be established that governs local boards (section 223.2), section 223.3(1) indicates it “authorizes” Council to appoint an Integrity Commissioner to apply that Code of Conduct, it does not mandate it. In fact, the Municipal Act proceeds to provide for situations where no Integrity Commissioner is appointed or where a specific function is not assigned to them. As a result, it is not clear to us that the Integrity Commissioner had the jurisdiction to investigate this complaint. Notably, the City’s webpage on the Integrity Commissioner indicates the Commissioner’s role does include applying the Code of Conduct applicable to local boards, but the link provided leads to the By-Law No. 16-288, which fails to provide that function (the webpage, perhaps coincidentally, also appears to have been last modified on March 5, 2020, the day after this complaint was received by the Integrity Commissioner). ”
The HCLC calls on Council to “issue a public apology to Mr. Kroetsch and the Hamilton Queer community for the heavy-handed manner in which Council sought to address its concerns with Mr. Kroetsch’s conduct as Chair of the LGBTQ Advisory Committee” among six calls for action.
The full letter is on the HCLC website.