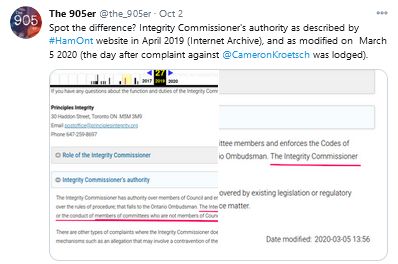 A tweet by podcasters Joel MacLeod and Roland Tanner highlights one of the many discrepancies in Council and Council’s Integrity Commissioners’ claims against LGBTQ Advisory Committee Chair Cameron Kroetsch.

Nobody on City Council has said when the update occurred, and neither has Hamilton City Clerk Andrea Holland.

Sometime between April 2019 and March 2020, the Office of the City Clerk changed a key passage on the web page.

The Internet Archive did not index the page again until May 8, 2020, during the 14 months which passed, the page was changed to state [emphasis upon changes added]:

“The Integrity Commissioner has authority over members of Council, members of Local Boards and Citizen Committee members and enforces the Codes of Conduct” and to remove that the IC’s jurisdiction is limited to members of Council.  The web page itself states it was last updated on March 5th, 2020.

It is possible the update occurred prior to March 5, 2020. Council’s investigation into the LGBTQ Advisory Committee Chair officially began on March 4.

Council decided to make the changes and to launch the investigation out of public view in closed session. We cannot be sure when this happened because Hamilton City Council holds more closed meetings than any other municipality, and the titles of the closed session items are intentionally vague.

(As a matter of administrative law, this does not matter because the Municipal Act requires Local Boards to be subject to a Code of Conduct, and the Act states the Code can investigated by an Integrity Commissioner from either the municipality involved or another municipality . This change was effective March 1, 2019, superseding the outdated bylaw.)

It seems nobody outside of the closed Council Chamber knew this rule change happened.

All of this shosw a pattern of behaviour by Hamilton City Council, they took an accountability officer created to address municipal corruption following the Toronto Computer Leasing and External Contracts Inquiry, and have turned it into something it was never intended to be.

MacLeod and Tanner’s tweet does a great job of illustrating this.

Additional: The 905er podcast is proving to be interesting, with timely interviews of people in the news in the West GTA area.