I’m working on summarizing the 661-page consultants report on the future of Sam Lawrence Park. It is an extensive information dense document covering everything related to the park. My notes are a couple of pages long now.
In the report are the discarded options for changes to the Jolley Cut and Concession Street. It is nice to see this level of transparency in a public document, mostly importantly because it gives us a detailed understanding of the decision making process involved in the consultant’s final recommendations.
I’ve extracted the discarded function design options, here’s the PDF of the five designs if you are interested.
Sam Lawrence Park is intersected by the Jolley Cut, a major mountain access route between the lower city and mountain. There are no alternative routes. Due to how the road bends in the escarpment cut, any queuing of cars poses a higher than usual risk of rear end collisions. This is one of the reasons the roadway has the “jughandle” for vehicles wishing to go from the Jolley Cut onto Concession Street to travel eastbound – a queue of vehicles awaiting a left turn at the intersection risks creating a hazard.
Sam Lawrence Park is a popular destination, many pedestrians need to safely cross the street. The current design is not safe for pedestrians, especially more vulnerable users of the park.
The space available is constrained, there are houses on Concession, the escarpment to the south, and any space used for roadway is less space for parkland in one of Hamilton’s premier park locations.
Thus, the consultants needed to find a design which best balances various needs, needs which are more specific than in many other locations
Ultimately, they recommend the removal of the right turn channels on the east side of Upper Wellington, and a redesign of the “jughandle” to create a formalized pedestrian crossing. A stop sign will be installed for traffic coming from the Jolley Cut on the “jughandle” to make clear pedestrians have priority. Removing the right turn channels increases pedestrian safety, and makes crossing a single stage. 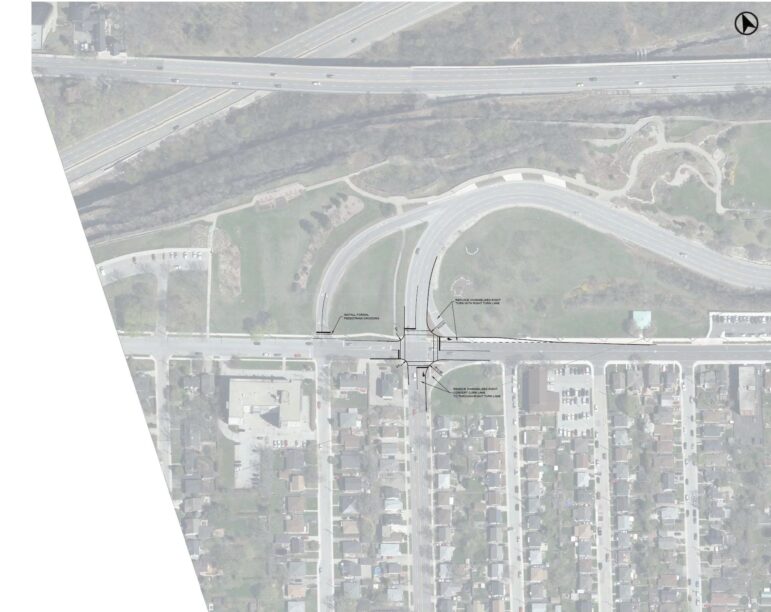 Consultants Recommendation for Changes to the Design of the Jolley Cut connections to Hamilton Mountain roads Concession Street and Upper Wellington Street.

There are some interesting concepts which create a “T intersection” and take less land for the intersection, also removing the jug handle. These are discarded because of the high traffic flow from the Jolley Cut, and the T requires more turning actions by vehicles.
During public feedback, some people suggested a roundabout design for the intersection, a couple of the discarded designs envision what a roundabout would look like. It really gives a perspective on how much space is needed for a roundabout (also due to the slopes of the topography, the amount of infill which be needed).
Again, here’s a PDF of the discarded designs, if you wish to “nerd out” like I just did.