I’m particularly proud of The 155 Podcast because I gave voters the opportunity to hear from candidates, and for candidates to speak to voters. In Service of Democracy is the motto of The Public Record and I delivered.
Study after study after study proves the value of local journalism to local democracy.  They confirm the decline in coverage of local elections, caused by decreasing number of local journalists as daily newspapers close, is making local elections less competitive and voter turnout is declining more rapidly in communities that have lost daily news coverage. The result is increased corruption in local government resulting from lower accountability.
Last week, academics Meghan E. Rubado and Jay T. Jenning’s wrote a public article about their research of the impact of decreased staffing at 11 medium-sized California newspapers and the impact upon local elections in those communities.
They “analyzed the relationship between newsroom staffing levels at 11 daily newspapers and the outcomes of 246 mayoral elections in 46 cities served by these newspapers. The period of study was 1994-2014.”

I’ll draw your attention to a chart included in their article on the decreasing size of newspaper staff size: 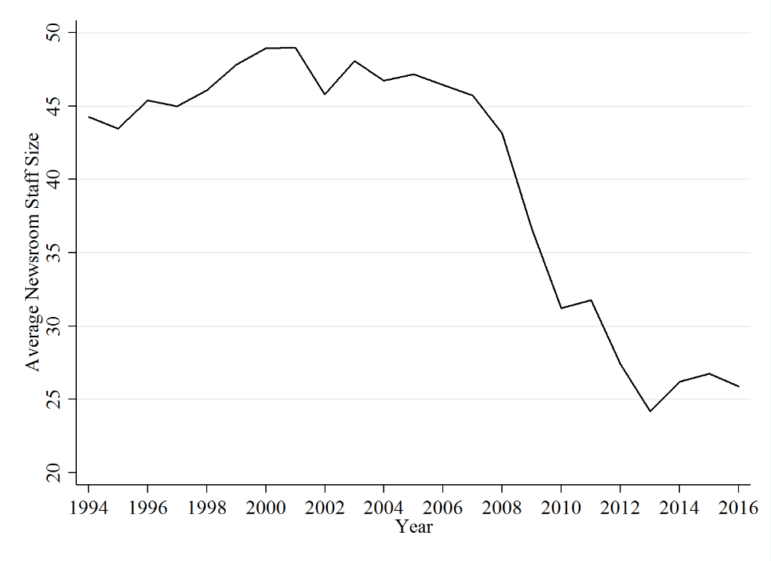 Much as been the case in other studies, they found that new online niche media sources [such as this publication] and blogs have not filled the void left. [It is hard work, I know better than most]
My mission is clear: provide the information which enables voters to be informed and engaged. 2022 is quickly approaching.