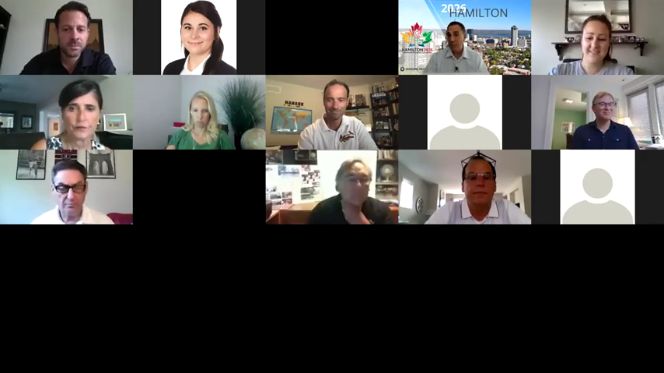 The estimated cost of hosting the 2026 Commonwealth Games is now somewhere between $1 billion to $1.1 billion, says private bid group President PJ Mercanti. This compares to an original $1.5 billion forecast to host the Commonwealth Games in 2030.
The bid group’s goal is to have the federal and provincial governments cover up to 80 percent of this cost, with ticket and sponsorship revenue covering 10 percent to 15 percent to “help close the gap”, and a combination of private money, a “modest” amount from Hamilton Future Fund, and municipal “in-kind” contributions to “help close the gap, if there is a gap”, Mercanti said.
“It is a no-brainer”, he said. “It is unfortunate that some Councillors took a position to not even listen to the new deal”.

The 2026 Games will involve 16 venues, instead of the planned 21 for a 2030 Games with around 3000 athletes competing. For comparison, Mercanti said the 2015 Toronto Pan Am Games involved 30 venues and 7000 athletes. He said this makes a 2026 Commonwealth Games will be more manageable and cost-effective.
Mercanti’s statements came during a recent meeting of the private 2026 Commonwealth Games bid group and its supporters to plan a public relations blitz in advance of the August 10 City Council debate on whether to commit to the games.
The video meeting included Ward 7 City Councillor Esther Pauls, bid members Louis Frapporti, Cecelia Carter-Smith, Greg Maychak, Jasper Kujavsky, Thérèse Quigley and at least a dozen other people.
Much of the discussion focused upon how to convince Hamilton City Council to approve the 2026 Games and win over a skeptical public to make the Games a focus of Hamilton’s COVID recovery spending.
Presently, six Councillors have firmly committed to the Games, with three firmly opposed, another three have expressed opposition but carefully chose their words to say they could support a ‘no cost’ Games, and another four expressed general concerns.
The bid group needs to secure at least nine Council votes for the City to move forward towards hosting the 2026 Games.
“What the City will commit to initially is not a commitment to any funding,” said Louis Frapporti, the lead spokesperson for the bid group. “If it is the City’s view … that it does not want to spend a single penny, the City can decide to not spend a single penny. We may reduce a venue, we may reduce a sport”.
“The goal is to ultimately get the federal and provincial governments obviously to be at the table”, said Mercanti.
Mercanti stated that in conversation with Progressive Conservative Member of Provincial Parliament Donna Skelly, that Skelly describe the opportunity to bid as “enticing”.
Frapporti states staff in both federal and provincial ministries of sport are “very supportive” but the civil servants state the decision of support is ultimately up to the respective Cabinets.
He states the federal government will be supportive in principle if the provincial government signs on in principle. He says provincial support is contingent upon Council first voting in favour.
Bid team member Greg Maychak, who recently retired from the City of Hamilton as a Senior Project Manager for sports after 34 years working for the City, says the new bid will involve six new venues, six renovated venues, and four venues which will need “overlay” for the games.
Mercanti and Frapporti told supporters that the Commonwealth Games Federation (CGF) has dropped many of their hosting requirements, allowing Hamilton to redefine what hosting a multi-sport event means for a community.
As it stands the CGF is asking the Hamilton bid group to secure support for hosting a 2026 Games because no city elsewhere in the world is expressing interest in hosting them. Without a 2026 Games, it is possible the Commonwealth Games will be no more and there will be no 2030 Games.
Traditionally, multi-sport international games require the athletes’ village to be concentrated in a single location or a very few locations. CGF says the Hamilton bid can disperse the housing in multiple locations. Mercanti said this will help make the affordable housing component of the games more responsive to local needs, and the housing could be part of private developments already planned in Downtown Hamilton.
“We have an opportunity here to show the world – Olympics, Pan-American, all multi-sport governing bodies – how games should be managed and run”, said Cecelia Carter-Smith. “Even as sad as it is with the pandemic, not just locally but globally, it has opened a door for us to leave a legacy like no other”.

The group had a lengthy discussion of how to win public support which began when a supporter, who I could not identify by voice, said they are concerned people are hearing Brad Clark’s critique against the Commonwealth Games as a municipal priority.
What is the strategy for communicating to Hamiltonians?, a supporter asked.
Frapporti said they have stories planned in local media and a social media campaign leading up to the August 10 Council vote.
“CHCH, I’m confident because I’ve had discussions with them, will be a partner with us in communicating”, said Frapporti. “The Spectator has been very supportive in advancing the conversation, you’ll see more from them”.

“We even got a few celebrities we’re going to surprise everyone with, who have a Hamilton background, haven’t been here for awhile, they have reached out to see how they can help”, he added.
Carter-Smith said those opposed to the Commonwealth Games “need to give us an opportunity to share with everyone what we can do. You can’t make a decision on something until you have the facts”.
“We are doing this now for the future”, she added. “This is an incredible opportunity”.
“We are known as the Ambitious City, let’s prove it!”