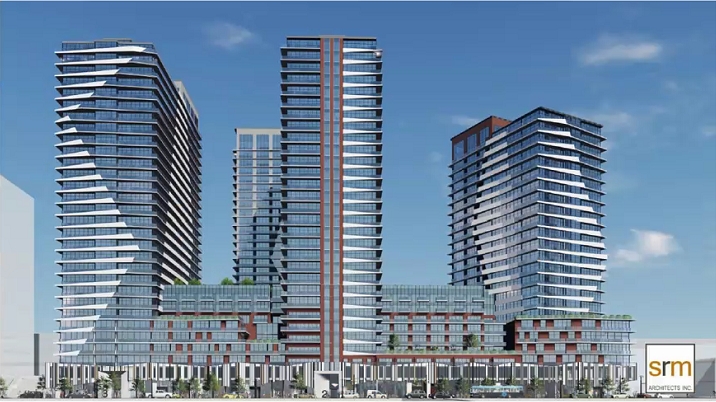 If it happens, the redevelopment of the Hamilton City Centre site will be the largest Downtown Hamilton construction projects in 30 years.
IN8 Developments purchased the City Centre property at 77 James Street North last year, and stated in press releases they expected a cost of $700-million to re-develop the site.

They have signed a letter of intent with the Hamilton Urban Precinct Entertainment Group. Last week, the Precinct Group was awarded operations and leasing of the City of Hamilton’s downtown entertainment facilities and properties.

The letter of intent reportedly includes exploration of the commercial space in this redevelopment being a convention centre.
Hamilton Eaton Centre, as the City Centre was originally known, opened in 1990.

Under the Downtown Hamilton Secondary Plan, passed by Council in 2018, the proposal fits within the zoning for the site. Meeting the requirements of zoning, the proposal proceeds directly to the Site Plan approval stage of planning approvals. Thus, the City of Hamilton’s Chief Planner Steve Robichaud will determine its fate under the authorities delegated to him by City Council under the Planning Act.

SRM explained the current proposal to DRP. They state it is designed to meet the requirements of Hamilton’s Tall Building Guidelines, including shadowing restrictions and minimum tower separations.

The proposal includes floor plates larger than 750 square meters, and the length of the building faces on James Street North and York Boulevard exceeds 70 metres. 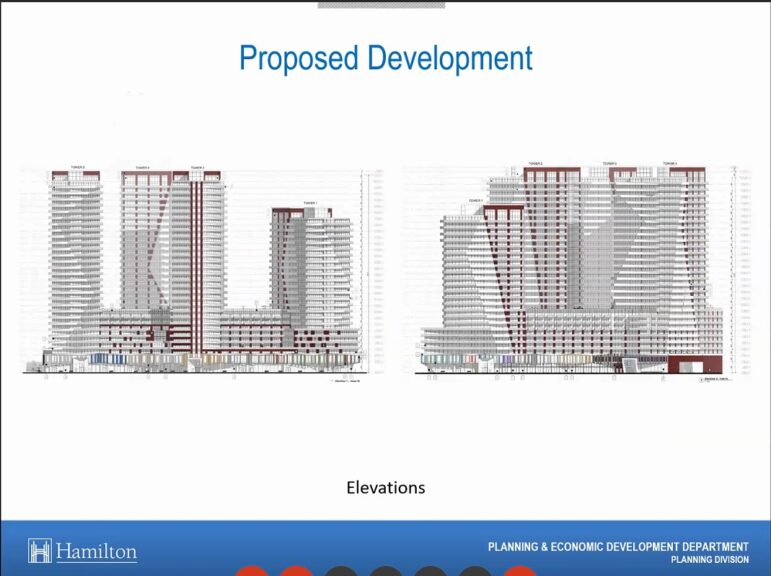 City of Hamilton staff presentation slide of the elevations of the proposed redevelopment of 77 James Street North as presented to the Hamilton Design Review Panel in July 2020.

DRP was requested by City of Hamilton planning staff to review the proposal for conformity to the intent of the guidelines.

Three of the towers are proposed to be 30 storeys tall, at or near the maximum height allowed in Downtown Hamilton (the height limit is equal to the geodetic height of the escarpment south of the site following the street grid), and the fourth tower at the corner of James Street and York Blvd will be 24-storey.

The developers agents state the slightly lower 24-storey height of “Tower 1” is reflective of its proximity to other properties.

When constructed by Cadillac Fairview, the City Centre foundation was designed to carry the load of a mid-to-tall sized building. The exact details of weight-bearing ability and where a tall building can be supported on the site are unknown. A recent court ruling involving the property confirmed the “potential to build upon the existing foundation“.

The podium does not step-back for “Tower 2” or “Tower 3”. DPR members expressed some concern about this. The architectural firm explained that the building’s design elements will break up the massing of the buildings and provide for a pedestrian-friendly sidewalk realm. 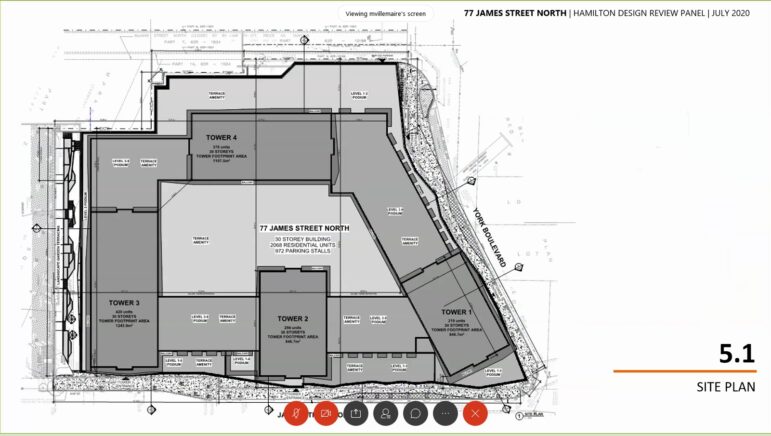 The podium will be a mix of commercial and residential space. The exact amount of each is to be determined. Agents for the developer spoke at length about the uncertainties of commercial retail and office demand post-COVID.

The proposal includes what is described as an extension to King William Street.

Prior to COVID the agents say the proposal included restaurant patios between the new development and Jackson Square. The land will be private, and not legally a public sidewalk, and function has a right-of-way connecting James Street to the roof of Jackson Square. The sidewalk would slowly slope to reach the elevation of the Jackson Square roof.

With COVID, the agents say the developer is looking at live-work units along this realm as a possibility.

The agents discussed urban design architectural elements which they state will pay homage to Hamilton’s “landmarks and significant features” including the Skyway Bridge, Chedoke Falls, the old and current city halls, a total of 15 places. 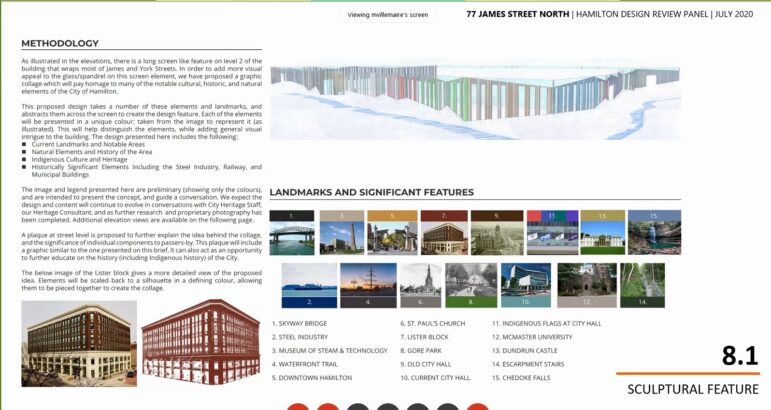 Design inspirations for the proposed redevelopment of 77 James Street North as presented to the Hamilton Design Review Panel in July 2020.

There were many positive statements regarding the intent of the plan.

Critiques were expressed about them bulk of the podium and the ground mass of the building. Multiple members stated they are concerned it will not interact well with the existing character of James Street North – especially the heritage buildings across the road on the east side of the street.

Many members were critical of the proposal for rushing to be submit prior to the July 1st development charges increase.

“You really haven’t hit any of the marks”, stated DRP panel member architect Colin Berman. “I recommend going back to the drawing board”
The City should study the “de-malling of this block”, Berman added.
He continued “This is just a take take take development” saying it “turns its back on the city”.

Berman recommends the City’s Chief Planner and the developer look to Toronto’s Mirvish Village redevelopment for inspiration stating “it is the perfect precedent … you should be copying”.

“You have to break the mall”, she told the agents. She cited a lack of connection between Rebecca Street and the Hamilton Farmers Market, stating there should be a pedestrian corridor to break up the bulkiness of the proposal.
Panel member James Webb, a RPP, expressed similar critiques about breaking up the block and making it more pedestrian-friendly.

Webb focused upon what he said was a lack of consideration of the heritage character on that portion of James Street. Webb was particularly positive about the proposal to create a pedestrian lane-way between King William and the roof Jackson Square. 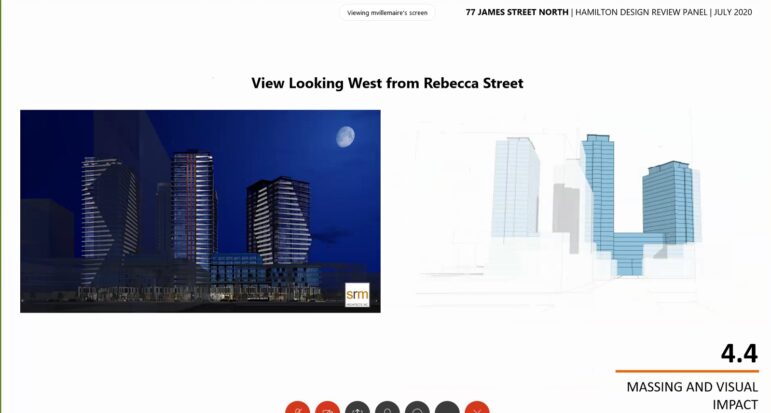 In summary, the Panel’s feedback focused upon the scale and how the buildings will feel to pedestrians at street level.

The zoning under the Downtown Secondary Plan does not set a density limit for tall building sites. The primary constraint on density is a requirement for 0.7 parking spots per unit in buildings with greater than 51 units.

The proposal includes two levels of underground parking, devotes approximately two-thirds of the ground level to parking contained within the podium, and a second level parking within the podium.

Will all zoning requirements met, the application can proceed to Site Plan approval. The City’s Chief Planner then determines if the proposal is approved or if they seek modifications to it.

Based upon the comments from the Panel, one can expect the Chief Planner will request the developer to make modifications incorporating feedback. Previous large development proposals have been brought back to Design Review Panel for a second hearing following modifications.
Due to the time constraints of Wednesday’s hearing, not much discussion occurred about the heritage and unique character features within the existing City Centre. The clock faces within the clock tower were installed in 1888 as part the old City Hall which was on the site. The faces have protected heritage designation.

The public art in the centre atrium of the present mall, the bronze and granite frieze, will be incorporated into the new development.

And an accidental piece of art will also be saved, the forgotten EATONS sign facing south towards Jackson Square from the windowless fourth floor of what was the Eatons department store will be included in the new development. Crews which took down all the other Eatons department store signs after its bankruptcy in 1999 somehow missed this sign. 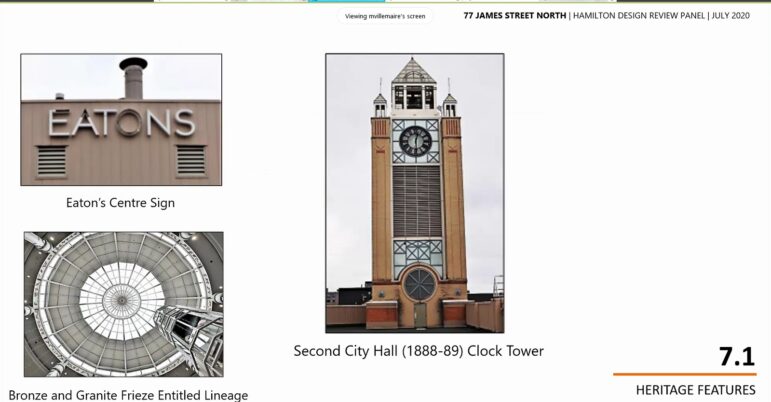 Due to the meeting being by video conference, it was not possible to interview the developers’ agents or the Chief Planner.

The City of Hamilton did not post any of the meeting slides to its website, and the City did not release them when requested by The Public Record.