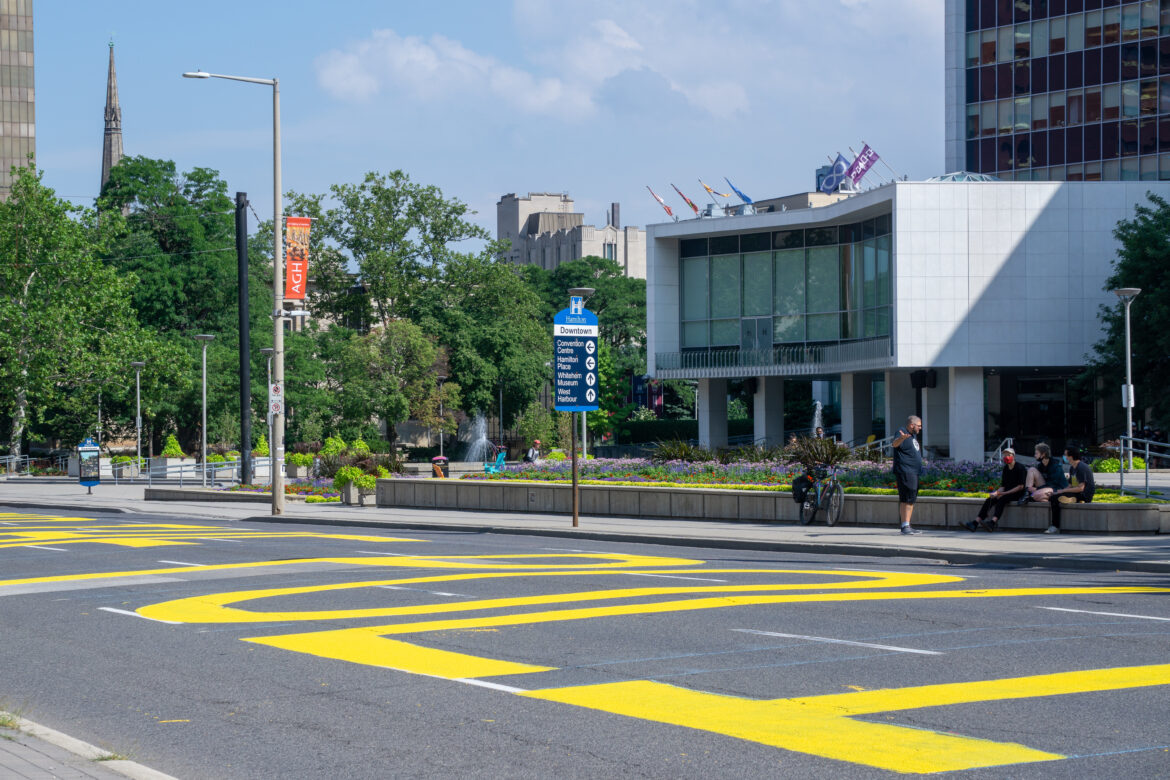 "DEFUND THE POLICE" painted on Main Street West in front of City Hall on July 23, 2020

A group of well-organized Hamilton protesters closed Main Street West in front of Hamilton City Hall Thursday to paint “DEFUND THE POLICE” as a message of protest prior to the meeting of the Hamilton Police Services Board today.

Within the protest group, their vision for the future of policing in Hamilton varied from cutting the police budget by 20% with funds going to social services and community groups, to chants to abolish the police.

Hamilton City Hall did not interfere with the protest. The City erected traffic barriers to divert traffic during the protest.

The protesters painted their message on the road.

Shortly after 3:00 p.m., the City of Hamilton issued a statement:

As you may know, today a group of community members gathered out front of City Hall as part of a protest, and the words “Defund the Police” were painted on Main St. The City of Hamilton will be removing the paint this afternoon out of an abundance of caution and in the interest of motorist safety. The paint used is household paint that will create slippery conditions impacting safe driving on the roadway. The City of Hamilton supports the public’s right to protest and is removing the paint only in the interest of public safety.

The City’s communications statement threaded a fine needle, the City likely not wishing to be seen as heavy-handed against the protest message. The City, as of this writing, is not seeking to fine the protesters, not indicating that it is sending them a bill for the cost of removing the paint.

Under the Municipal Act and the Highway Traffic Act, municipalities are responsible for safe road surfaces. There are legal standards for paint materials used on roadways. The City has a positive legal obligation to act in regards to road safety. 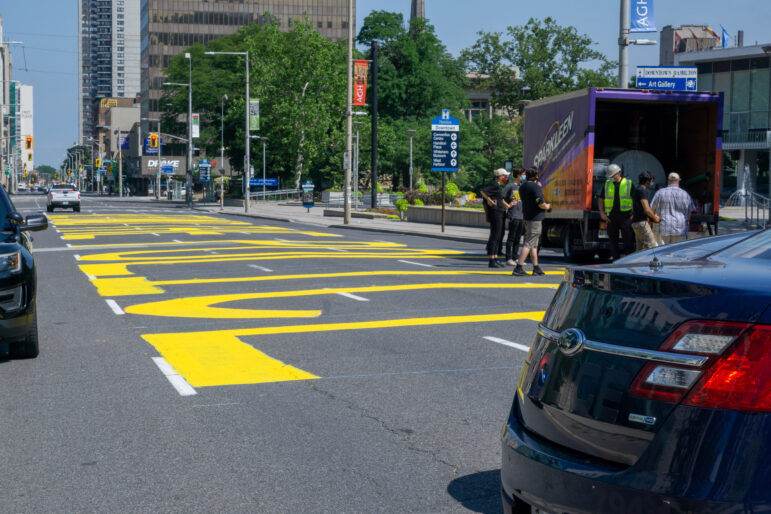 “DEFUND THE POLICE” painted on Main Street West in front of City Hall on July 23, 2020 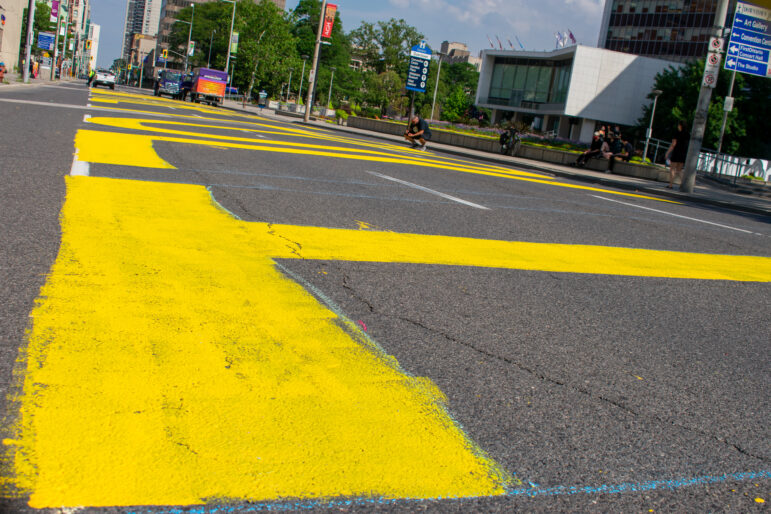 “DEFUND THE POLICE” painted on Main Street West in front of City Hall on July 23, 2020

The City of Hamilton did not cite the standards for road marking symbols and artistic decoration on roadways as the reason for removal.

It is fair political game to point out City Hall intentionally lied and covered up its knowledge of friction problems on the Red Hill Valley Parkway for years. It is also fair game to cite the numerous other cover-ups, corrupt public practices, or years of delay on simple public works projects. None of this removes the City’s legal obligation to act upon becoming aware of a potential road hazard.

The City quickly hired a contractor to remove the painted message from Main Street West. 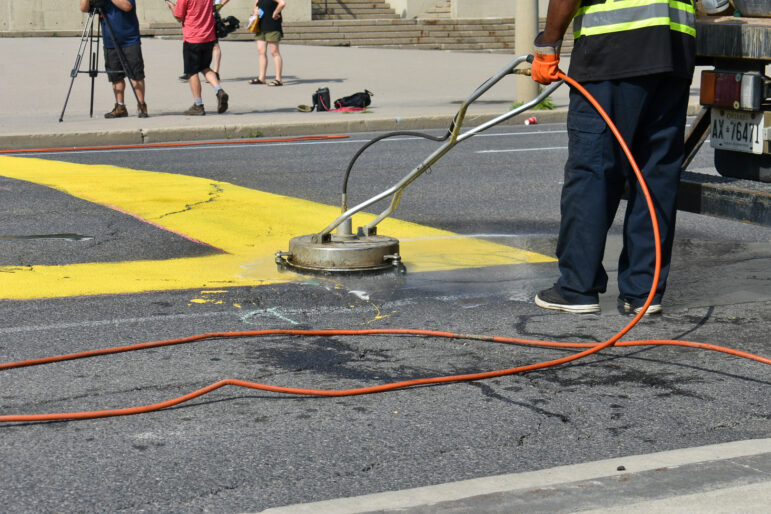 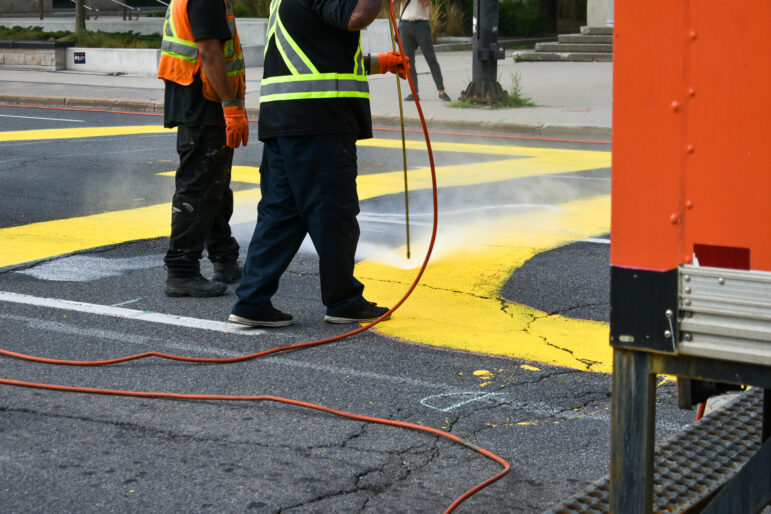 The City’s statement read “The City of Hamilton supports the public’s right to protest and is removing the paint only in the interest of public safety”.

Despite this statement, the City  removed posters detailing the Hamilton police budget cost as a percentage of the overall City of Hamilton operating tax levy and recent Hamilton Police scandals.

The posters were placed on poles across Hamilton prior to Thursday’s protest.

I asked City Hall’s chief spokesperson to explain why they were removing this speech, considering their official statement. The City has yet to provide a response to the questions. 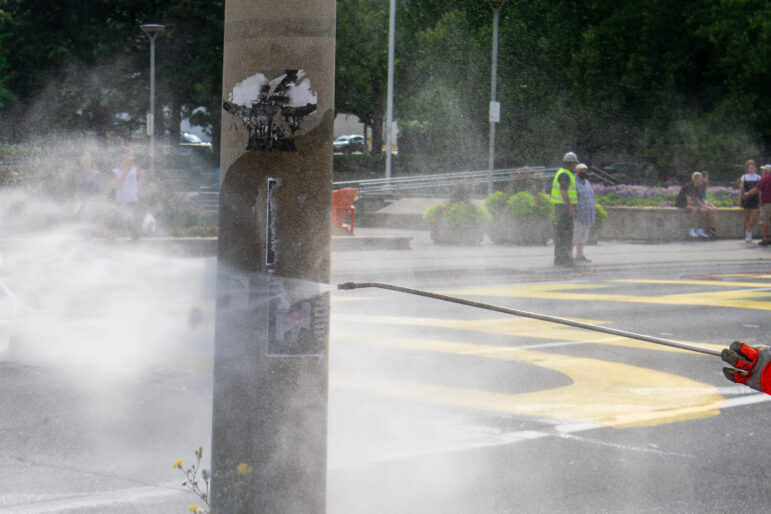 Hamilton Police Respond with at Least One Warrant

In the private media briefing, Hamilton Police Deputy Chief Frank Bergen is reported as stating police had already executed one warrant this evening, and launched a full criminal investigation of the protest.

Deputy Bergen inflamed tensions between the LGBTQ+ community and the Hamilton Police Service in June 2019 when he directed the arrest of Ceder Hopperton for a speech Hopperton delivered at a public town hall in the City Hall Council Chambers on June 18. 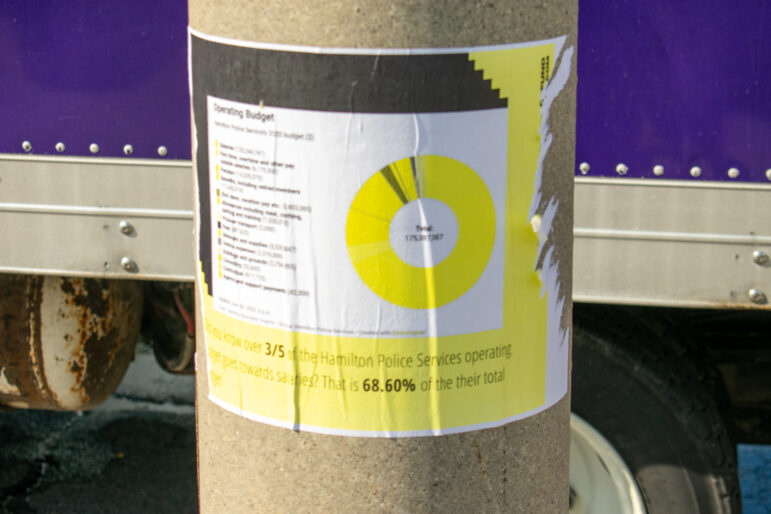 Poster showing the Hamilton police budget as a portion of the overall City of Hamilton operating tax budget. The City removed the poster.

The arrest drove a wedge between the community and police. There were many in the LGBTQ+ who were calling for dialogue with police. That was not possible after the arrest.

There were around two dozen police officers around City Hall at various points of today’s protest.

There was a moment of tension when a man tried to start a confrontation with the protesters. The protesters did not engage the man, who came back at them many times. Police spoke to the man when he was leaving.

Others got out of their vehicles to yell at the protesters, a few stuck their heads out. In each case I witnessed, police issued verbal warnings.

The protest caused a large disruption of traffic on Hamilton’s main arterial road. 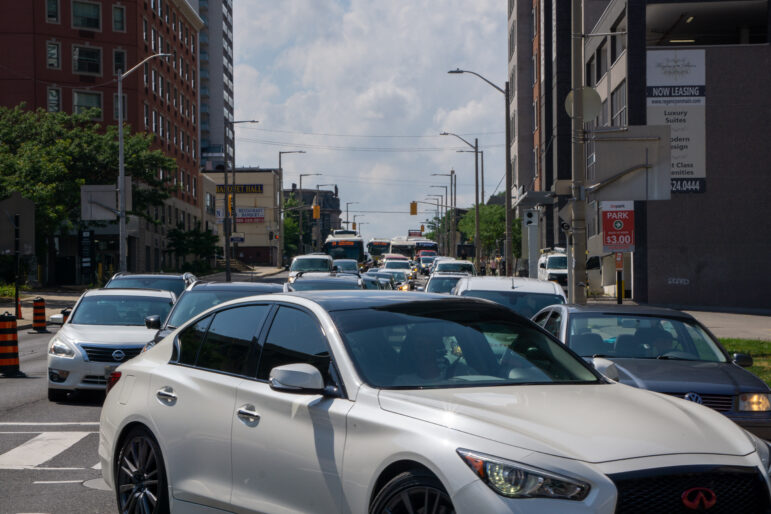 Summary and What’s Next

Thursday’s demonstration pushed the message of the protesters back to the top of Hamilton’s news outlets websites. Barring any unexpected major news event, it will remain in the top five stories (if not top three) over the weekend.

The organizers have shown themselves capable of closing a major street, quickly painting it, and then leaving. It was quite the feat of logistics – similar to their shut down of Main Street West last month. They used chalk during that event to write messages on the City Hall forecourt and on Main Street.

It remains to be seen what happens next, what strategies are pursued by the various players, and if there is another attempt to paint another message on Main Street in front of City Hall.

Politically, only two members of City Council have stated clear support for the demands of the protests.

A recent public opinion poll commissioned by The Toronto Star found strong support for “taking certain tasks away from police such as mental health calls and then adjust the budget to reflect the reduced burden”, 74% of choosing this response against two other options – cutting the police budget or abolishing the police to be replaced with some other kind of public safety body. (pg 94 & 95)

One thought on “Coleman’s Notes: Painting the Roadway in Protest”