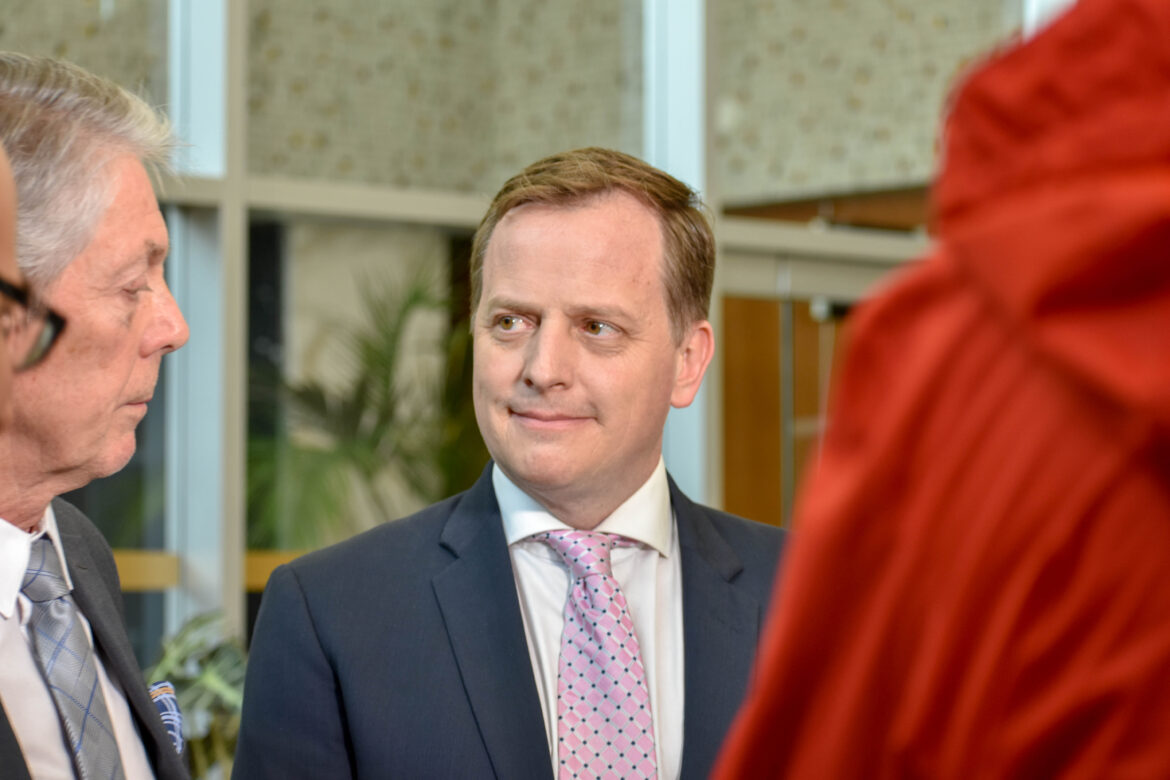 Ontario’s Minister of Transportation Jeff Yurek says Hamilton’s LRT project is a go within its existing $1-billion dollar Provincial funding commitment.
“We are lifting the land freeze, and we will be extending the RPF period for another six months”, said Yurek to assembled media in the foyer outside the Mayor’s Office.
“Premier Ford has committed a billion dollars to this project, and it’s going to be wonderful for the City of Hamilton.”
The committee was made by the previous Premier Kathleen Wynne of the Liberal Party.
Yurek made the statements following a 15 minute meeting with Hamilton Mayor Fred Eisenberger at Hamilton City Hall.
Matt Van Dongen of The Hamilton Spectator citing internal MTO documents TheSpec obtained using Freedom of Information legislation, asked Minister Yurek if the Ministry still believes the project is “perhaps” overbudget, and who will fund costs beyond the $1-billion commitment.
The Minister said bidders will confirm costs, but “the federal government has yet to involve itself in this project, and they do so throughout the entire province”, stated Yurek. “I don’t know why they haven’t come into the City of Hamilton.
“I’m sure the Mayor will be reaching out to them, if it goes over budget”.
Yurek added “There’s also private interests who I’m sure would love to have some investment in this.”
Yurek stated the Province will expect the Mayor and Council to work on those additional/alternative sources of funding.
Mayor Eisenberger says that the federal Minister of Environment and Climate Change Catherine McKenna expressed interest in hearing from the City on LRT if the project requires additional budget. McKenna visited Hamilton City Hall two weeks ago on March 14, 2019.
The three shortlisted bidders are all expected to submit final bids.
Mayor Eisenberger says the City provided the Minister with a briefing note on other local transportation issues they are seeking the Minister’s assistance with. Those issues are:

The Hamilton Chamber of Commerce quickly issued a media release praising the Minister’s statement.
“I want to applaud the Ford Government for going forward with the Hamilton LRT project,” the statement attributes Keanin Loomis, President and CEO of the Hamilton Chamber of Commerce as saying. “This is a government that listens to business, and they’ve done an incredible job of thoroughly evaluating the business case for Hamilton LRT. They’ve concluded that this project will be transformative for Hamilton and produce jobs and economic development. We all believe the LRT’s impact is going to positively impact the long term fiscal outlook of the Province.”
Bids are expected to close in September.