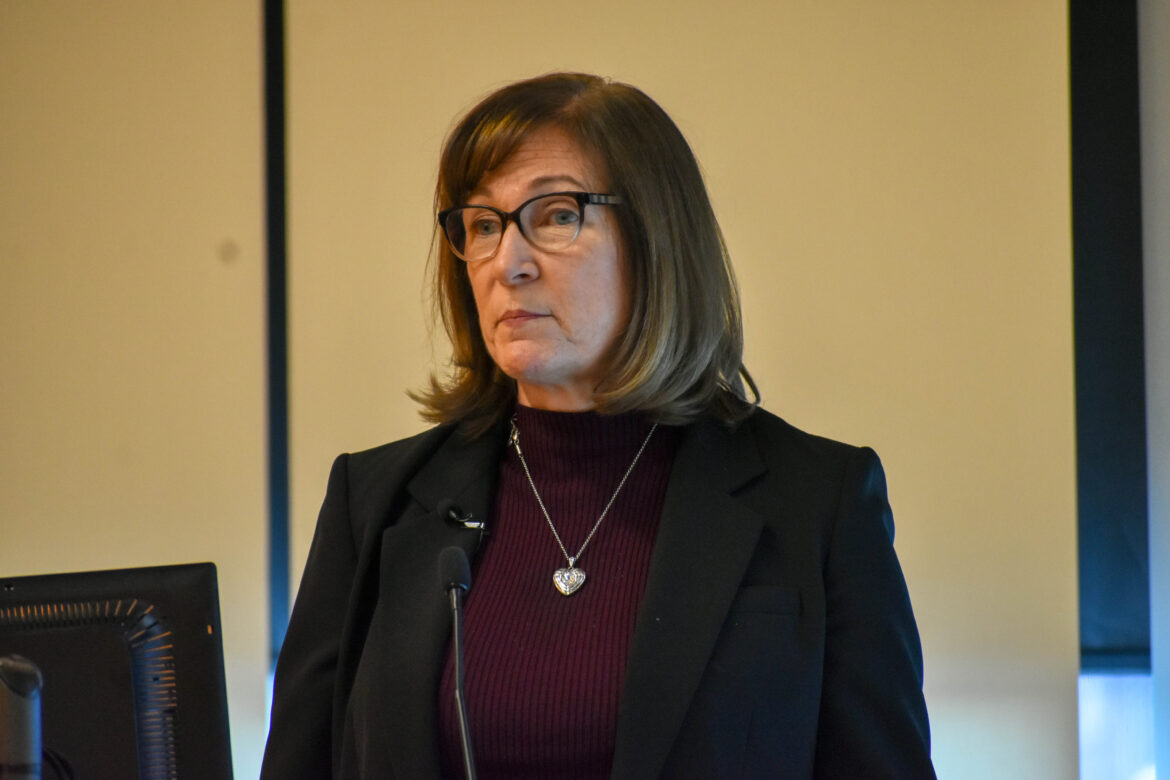 Mary Lee, Executive Director of the Local Planning Appeal Support Centre speaks to a City of Hamilton PEDtalk on January 21, 2019

The Ontario Progressive Conservative government is eliminating the Local Planning Appeal Support Centre (LPASC), less than a year after the agency was created to support neighbourhoods and communities in representing their concerns within Ontario’s new planning appeal framework.
The National Observer does a great job covering the cancellation, and speaking to key players who were involved in the creation of the LPASC including former Minister of Municipal Affairs and Housing Ted McMeekin and McMeekin’s former key advisor Mark Cripps. Read their coverage here.
My note will provide some commentary and thoughts from a journalist who regularly covers planning appeals and their hearings.
The LPASC closure comes at a time that Ontario’s planning appeal framework is in a state of flux, with the new Local Appeal Planning Tribunal (LPAT) which replaced the Ontario Municipal Board (OMB) unsure of its own authorities, requesting the Ontario Superior Court’s Divisional Court rule on a legal interpretation of LPAT’s governing legislation.
Nobody is sure if the new LPAT framework will give more power to developers, or more power to municipal councils.
Meanwhile, community stakeholders such as neighbourhood associations are attempting to figure out how they effectively present their interests within the new process.
Under the former OMB, a savvy community would have neighbourhood members sit in during the oral hearing, and craft their oral participant statements to reinforce points supportive of the neighbourhood position, and introduce information that would guide the OMB’s decision towards their favour.
Under the new LPAT, the role of a participant is severely diminished.
Nearly all arguments to the LPAT are in written format. The LPAT is not sharing those written arguments in electronic format, the power of a participant is reduced to a written statement without the advantage of the information available under the former OMB process.
[The LPAT only allows viewing of public documents in print format at it’s Downtown Toronto offices during business hours.]
This is why the Local Planning Appeal Support Centre mattered to ensuring the new LPAT system was not to the exclusion of grassroots neighbourhood associations, non-wealthy individual participants, and other public interest oriented groups.
The LPASC was designed to provide the organization resources, institutional memory and experts, and ability to hire planning experts these community interests who need to be able to effectively engage in the LPAT process.
With LPASC removed, there is significant risk that the LPAT process will be unbalanced against individuals, neighbourhoods, and community interest groups.
Mary Lee, Executive Director of the Local Planning Appeal Support Centre visited Hamilton in February as the speaker at a PEDTalk organized by the City of Hamilton’s General Manager of Planning and Economic Development Jason Thorne.
Lee described the LPASC as a new arms-length Ontario government agency which assists individuals and community groups to effectively engage with the new LPAT process.
Lee stated LPASC was providing basic advice and consultation within two days of being contacted by a member of the public. Often, the LPASC was providing advice on interacting with and referrals to municipal planning departments from individuals contacting them in the early stages of the planning process prior to Council decisions or non-decision appeals.
LPASC had entered into service agreements to provide funding to individuals and community associations obtaining party status in LPAT hearings.
The LPAT places significant weight upon “expert” testimony, often Registered Professional Planners who are compensated for their services in preparing their evidence.
This provided individual and community interests with the resources they needed to effectively engaged in the appeal process. Often, individuals and communities are faced with the daunting task of competing against well financed corporate developer interests, or the nearly unlimited resources of municipal councils.
The removal of LPASC kicks out on of the key legs to the new Ontario planning appeal system; and risks completely unbalancing the process.
I write risks, because it’s widely expected that the Progressive Conservative government will enable another complete reform of the planning appeal system.
I don’t expect new changes will address the problem of legal decisions often reflecting the interests which can financially afford to seek “justice”, but it’s not entirely clear that with it’s limited budget and staffing that LPASC was a solution either. Better than nothing, yes.
Those of us on the outside often think of the “developers” as a monolithic interest group. They are not, well the big greenfield developers will unite against policies such as the Greenbelt; individual development firms often work against the interests of others.
Often, the most profitable developments go to the developer who claims the public realm first.
As an example, under Hamilton’s new Downtown Secondary Plan, there are shadow, parking, and impact regulations which mean that while a property may be zoned for a tall building, if other developers build first then other developers will find their ability to reach higher densities and profits limited.
This brings us back to one of the concerns which developers have with the new process, the secrecy compared to oral hearings of the previous OMB.
Developers like the speed with which the new LPAT works. Privately, a few tell me they don’t mind that the new LPAT is designed to be deferential to municipal Council approved Official Plans and decisions – developers place a value on predictability that will result.
Developers like to know what other developers are getting, what they are doing, and the same processes of the OMB that individuals were using to advance their neighbourhood interests were being used by developers to their own advantage against other developers.
Expect to see more changes to the planning appeal process; and expect them to be haphazardly announced by Ontario’s “Government for the People”.