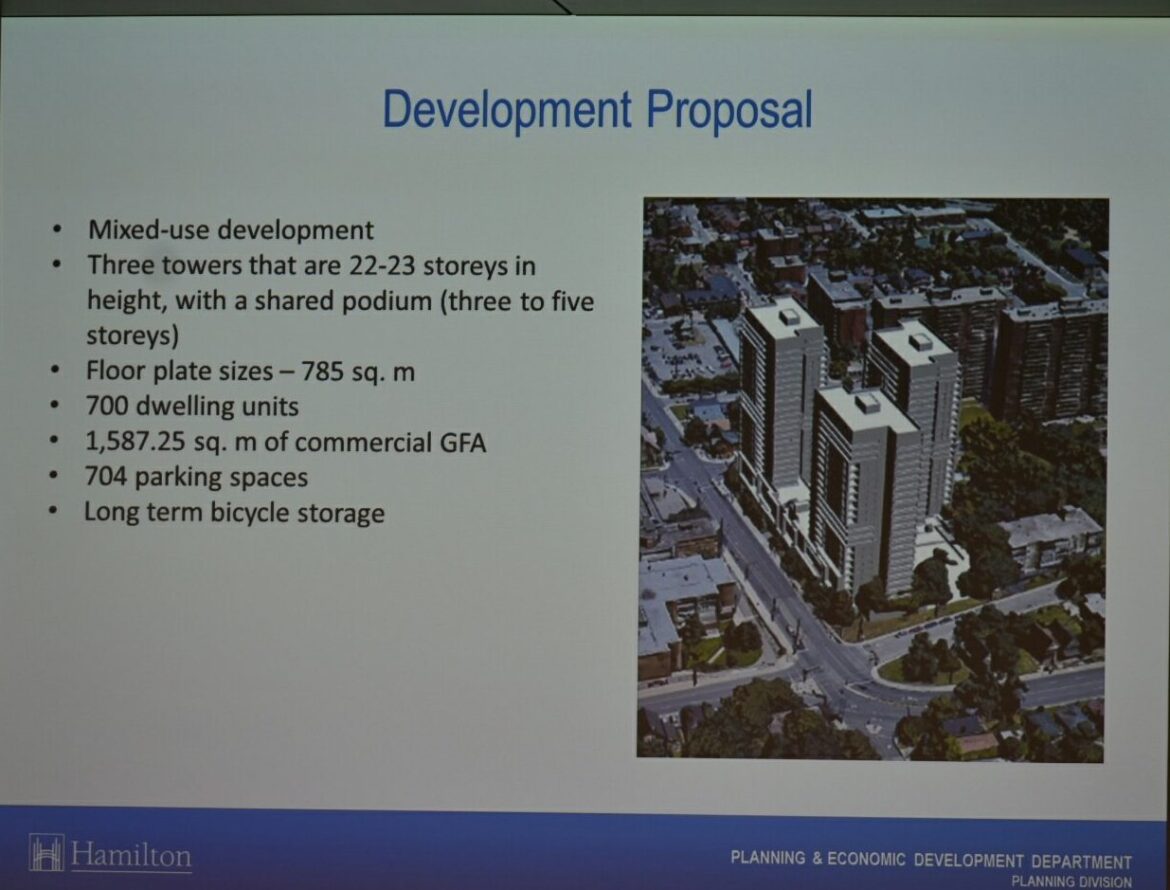 The “reality is this [proposal] is not in the Downtown, it really is in a neighbourhood”, urban planner Tim Smith stated to Spallacci group’s representatives as members of Hamilton’s Design Review Panel discussed a proposal for three tall buildings, of 22 – 23 storeys each, with 700 units in the south portion of the Corktown neighbourhood.

Smith is a member of the DRP.

At stake, is how Hamilton is going to grow well, and how the Urban Hamilton Official Plan will be applied outside of the Downtown Secondary Plan zone.

Sergio Manchia, Principal of Urban Solutions and a Registered Professional Planner, representing the developer Spallaci Contracting Limited, told the Design Review Panel that while the proposed site at 299-307 John Street South & 97 St. Joseph’s Drive is outside of the Downtown Secondary Plan zone, it is “still an integral part of our downtown”.

Manchuria provided good reasons why the site is appropriate for tall buildings, and described the area as a triangle of tall buildings.

There are numerous tall buildings nearby, Manchia noted, to the east (Olympia Apartments at 33 storeys, and the Arkledun at 20 storeys – both of which are taller than the escarpment), to the north (Oakland Square Apartments West & East at 21 storeys each), to the northwest (the four Villa Marie buildings at between 14 to 16 storeys each),  and the Innovation Tower of St. Joseph’s Hospital (10 storeys) to the west.

The current proposal from Spallacci is the result of over a year of negotiation with the City of Hamilton’s planning staff; with the height brought into compliance with the City’s tall building guidelines [which do not officially apply to this proposal as the guidelines are part of the Downtown Secondary Plan], changes to tower design and separations, and residential units proposed on the east side of the building overlooking Woolverton Park.

Manchia told DRP that existing rental units on the site will be included in the new buildings.

“The 67 units will be incorporated into the development”, adding the rental units will be fully integrated in the towers, not separate. He stated this it he minimum number of rental units, that the final unit mix is not determined, and there could be more rental units.

Manchia spoke positively of staff suggested changes which were incorporated into the plan prior to the DRP presentation, He noted staff suggested more separation between the proposed two towers on the John Street footage of the site and the proposed single tower on the east side. This created a “view corridor” on the site, which Manchia stated would provide for escarpment sightlines.

One of the interesting features of the slight is the significant differences in elevation at St. Joseph’s Drive compared to Charlton Avenue.

DRP members provided much praise for elements of the design, the proposed podium top tower residence spaces, and the commercial spaces on John Street and Charlton Avenue.

The elevation changes mean street-accessed commercial units are on different levels of the podium.

Interaction with Woolverton Park to the east.

DPR member Jackie VanderVelde, a landscape architect, asked about the setback of the podium from the property line. The setback proposed is 1.2 metres, VanderVelde suggested it should be five metres to protect the root systems of the mature tree canopy on the east side of the park.

DRP member Tim Smith, an urban planner, asked about the shadow studies and shadowing of the park. Other members noted the park would “be completely in the dark on June 21st”. June 21st is when the Sun is at its highest point in the sky, the date of least shadow.

The length of the unbroken podium was of concern to urban designers on the DRP. Some discussion was had about splitting the podium into two and creating a mid-block connection between the park and John Street.

Architect Vincent Colizza, DRP Chair, stated that with “no break in the urban wall” of the podium, the proposal does not meet “good urban design principles, especially when you have a park on the other side”.

Colizza was critical of the design for being boxy, stating there is “no attempt to terrace, no attempt to bring down the middle tower to bring sunlight into the park”. He added the building is not contributing to expanding the public realm because the podium rooftop is planned to be accessible only to residents.

Smith added to the concerns about the design. “A full podium and tower approach might not be right, that said you’ve done a lot here … you’ve made a good move in bringing the heights down from the original proposal … generally I think the height is okay. He added that “the overall massing of the project is something you’d see right Downtown”, stating “I think this site is appropriate for two towers”.

Smith, with other members indicating nodding agreement, emphasized that three towers as proposed are too much for the site. “It’s too close to the park in the case of Tower B … the one has to go or you’ll need to shrink the floor plates”.

Colizza argued the site lacks the mass transit service required to support 700 units, noting that the limited rush hour train service of the Hunter Street GO Station does not qualify as mass transit. John Street at Charlton is one of the most serviced local transit bus stops in Hamilton, with 42 buses per hour at peak times.

[Routes 20, 21, 22, 23, 24, 25, 26, 27, 33, and 35 all converge en route to Downtown. It is possible the HSR will streamline Mountain connectors with shuttle routes to Sam Lawrence Park, Lime Ridge Mall, and Mohawk College in September 2019 – this will decrease the number of buses per hour while improving service by removing ineffeciency]

Colizza’s comments were rooted in a concern about the number of parking spots proposed, the density with limited access points for 700 vehicles, and that 550 or 600-square-foot condos don’t sell well in other cities when not with 600 metres of mass transit.

Manchia noted the hospital generates much parking demand in the area [a “temporary” commercial parking lot presently operates on the site], the developer is considering some public parking in the building, but that one parking spot per unit has been the market demand recently in Downtown Hamilton.

Colizza noted that high-density developments work best when residents use mass transit, and 700 new vehicles in a concentrated area is problematic.

Near the close of the meeting, Colizza expressed to City of Hamilton Chief Planner Steve Robichaud that projects of this nature and size should have two DRP reviews and that the proposal presented – which Colizza described as a “final option” – should have been brought to DRP earlier to provide more meaningful feedback at a lower cost to applicants.

At the end of the meeting, there was a good discussion between Manchia and panel members.

DRP is an advisory body, and the DRP report is considered by the Chief Planner in writing the staff report which is presented to Council.

This particular DRP attracted many planners from the City’s community planning team, and urban planning team. General Manager of Planning and Economic Development Jason Thorne observed most of the meeting from the public gallery.