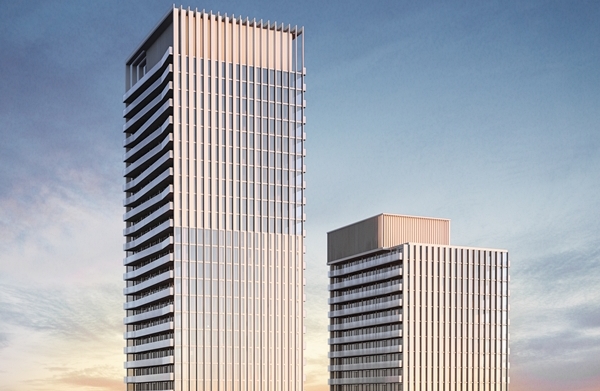 The Local Planning Appeal Tribunal, formerly known as the Ontario Municipal Board, set March 25 to 29 2019 for its hearing of the appeal by Brad Lamb’s Television City proposal for 163 Jackson Street of the City’s non-support of the project.
The pre-hearing officer Susan De Avellar Schiller did not decide if the hearing – which will be conducted under the old OMB rules – will be a review for denial or if it will be a non-decision hearing.
Schiller is a Vice Chair of the Tribunal.
Council’s Planning Committee voted against the proposal, but Lamb’s development group filed their appeal prior to Council as a whole ratifying the denial, and are stating that by filing prior to ratification, the hearing should be conducting under the more favourable lenses of a non-decision hearing.
A large number of Durand residents attended the hearing to seek participant status, the Tribunal granted status to around a dozen Durand residents, but instructed them to meet, determine where they have common interests, and designated spokespersons for those interests.
The Durand Neighbourhood Association was granted participant status.
Three groups were granted party status, but all three quickly revealed themselves to be unprepared for the responsibilities of being a party in a LPAT hearing.
The Bentley Tower condominium corporation, represented by recent Ward 1 candidate Sharon Cole, was granted party status. Cole says the residents of 67 Caroline Street South are concerned about parking and traffic.
A resident of 181 Jackson Street West, who did not speak loudly and I couldn’t hear their name, was granted status as a party. She did not outline her issues, beyond stating that she couldn’t afford to call expert witnesses, and her issues are those of the low-income residents of the CityHousing Vanier Towers complex.
Wentworth Condominium Corporation 297 was granted party status, identifying parking, traffic, and the location of traffic controls as their issues.
The City of Hamilton’s counsel identified primary themes to the City’s issues list: does the proposed development match the character of the area, does it contribute to a healthy pedestrian environment, and does the plan conform to the Urban Hamilton Official Plan.
(The proposal was submitted prior to the completion of the new Downtown Hamilton Secondary Plan, and the DTSP is not in force due to separate LPAT appeals against the plan)
The LPAT hearing officer took time and care to repeatedly explain the LPAT process to the new parties, but as the day continues, grew frustrated by their lack of preparation and statements against the LPAT process.
The lawyer representing Television City carefully protecting her clients interests while not directly criticizing the new parties.
At the end of the pre-hearing, Schiller gave the new parties 30 days to determine their issues, and charged the counsel for the City of Hamilton with coordinating communication to complete a procedural order with an issues list.
The lawyer for Television City stated they expect it will take five days for them to call their experts and counter the City’s issues list; but that they cannot predict what will be required to respond to issues that may be added by the three new parties.
Counsel for the City stated, mindful that any hearings beyond five days are now being scheduled for 2020 dates, stated they believe they can argue their case with their experts on the same days at Television City.
LPAT set the dates for the hearing starting March 25, 2019 scheduled for five days.
Both the City and Television City requested LPAT mediation to see if they reach a settlement without a hearing. LPAT agreed to assist; no details of what the settlement could involve was provided by either party.
Hearing Officer Schiller asked the three added parties if they were accept a settlement of the City’s issues list if the City and Television City reach agreement. Both Condo Corporation representatives stated they plan to continue to challenge Television City on those issues, including calling expert witnesses. (It’s unclear if the representatives have the authority to bind their condo corporations to the costs of LPAT litigation, which will likely be in the tens of thousands of dollars)
Near the end of the hearing, Hearing Officer Schiller reminded the three added parties of their responsibilities.
It is expected that a Case Management Conference will be held early in the new year, if so, it will be included in the procedural order.