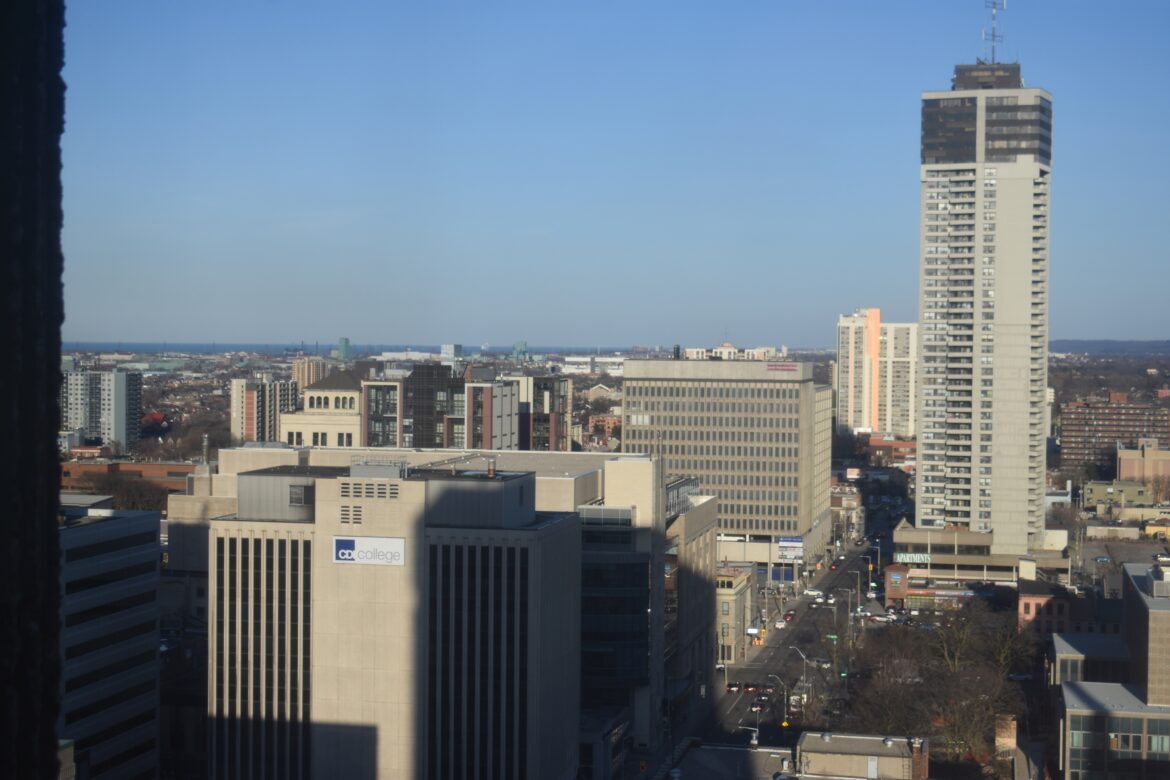 Two weeks ago, City Council approved Hamilton’s new Downtown Secondary Plan (DTSP) without amendment or much fanfare. A week prior, during a lengthy Planning Committee meeting, interested members of the public, community groups, and other stakeholders made their views known.
Full disclosure: I attended Planning Committee and made a statement on behalf of the Beasley Neighbourhood Association (BNA) in support of the new DTSP.
Despite receiving approval at City Council, the new DTSP isn’t quite over the finish line yet. There is a very real possibility that the new plan will be appealed and end up at new Land-use Planning Appeal Tribunal (LPAT). We won’t know for several more weeks.
We do know that the law firm Turkstra-Mazza and the planning consultancy Bousfields submitted letters on behalf of Television City Hamilton Inc., 163 Jackson Street West, outlining land-use planning objections—mainly to the use of the Niagara Escarpment to determine the height limit for tall buildings within the Downtown Planning Area.
City Council also received correspondence from the Hamilton-Halton Home Builders’ Association (HHHBA) arguing policies related to density bonusing for community benefits via implementation of Section 37 of the Planning Act were premature and should be held in abeyance until further consultation is done.
Representatives for other development interests spoke at Planning Committee the previous week outlining specific objections or concerns related to the accompanying zoning changes, specifically that they appeared to impact developments already approved, but not yet under construction.
So hard to say for sure, but given that City Council’s non-decision on Television City was appealed to the Ontario Municipal Board (OMB)—just before the Board was set to be no more—it wouldn’t be much of a surprise if the proponent appealed the new DTSP to its replacement: the LPAT.
None of this is particularly unusual. 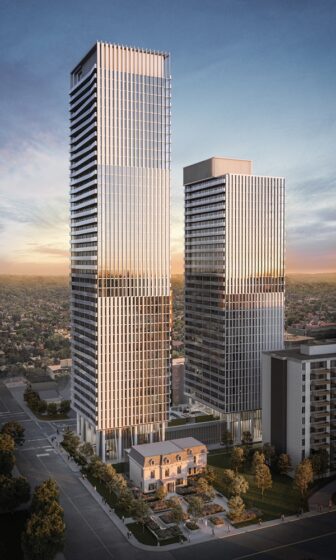 Official Plans and Secondary Plans function as big picture documents that provide a framework and medium to longer-term vision for how a city or particular area will develop via private and public sector investment. OMB (now LPAT) appeals can be about the big picture, including community impacts related to social justice and environmental concerns. More often, however, they are about economic interests linked to property rights: objections to land-use planning policies that add costs or limit what might be done with a piece of land.
If your interest is to maximize the revenue generated from a particular land parcel or the structures on it, then all things being equal you’d prefer flexibility of use, fewer requirements, and greater permissions in terms of height and density.
Of course, Ontario’s Planning Act, which has been amended significantly since being first enacted in 1946, still retains as its basic intent that municipal planning decisions balance macro-planning (what is in the best interests of its inhabitants given the regional context) with micro-planning (ensuring the compatibility of proximate land-uses).
To this end, the Planning Act outlines its purposes in Section 1.1 as follows:
(a)                to promote sustainable economic development in a healthy natural environment within the policy and by the means provided under this Act;
(b)               to provide for a land use planning system led by provincial policy;
(c)                to integrate matters of provincial interest in provincial and municipal planning decisions;
(d)               to provide for planning processes that are fair by making them open, accessible, timely and efficient;
(e)                to encourage co-operation and co-ordination among various interests;
(f)                to recognize the decision-making authority and accountability of municipal councils in planning.
So, while the province has assumed the role of regional planner with (b) and (c) achieved through the Provincial Policy Statement (PPS) and Growth Plan for the Greater Golden Horseshoe (Growth Plan), the Planning Act itself achieves (f) because it delegates the authority to regulate land-use in prescribed ways to local municipal councils.

If the preceding seems a little pedantic, it is to draw attention to the potential significance of the recent shift from OMB to LPAT: the increased importance of the PPS, Growth Plan, and a municipality’s Official Plan (OP).
Simply put, under the old regime at the OMB expert evidence from professional planners gained overwhelming importance in decisions via the notion of “good planning” and seemed to overtake municipal council’s power to regulate land-use, including via zoning by-laws (see Section 34 (3) of the Planning Act) to prescribe the minimum and maximum heights and densities of development.
When municipal officials made reference to the need for a plan or planning decision to be “reasonable” and “defendable” at the OMB, they were in effect saying as a key part of the determination we need to anticipate how this might be received at the OMB should it be appealed. And there is no hard-or-fast definition of what constitutes “good planning”. Just an OMB member’s determination based on the mix of jurisprudence and evidence, the latter mainly from recognized experts, presented during an appeal hearing.
Given that provincial policies lean heavily toward Smart Growth intensification it should be no surprise that most appeals by development interests seeking more height and density than permitted in municipal plans framed their cases before the OMB around how their proposal aligned with this and should be permitted on that basis. Taken in isolation it was often hard to sustain contrary planning arguments, especially once nearby precedents could be drawn upon.
Understandably on the community side of the equation for those with some knowledge of planning as it is practiced in Ontario and the resources and willingness to fight OMB appeals, this has encouraged so-called NIMBY responses to proposals that deviate from the existing character of an area. After all, based on the logic of precedent, once you’ve allow a development that is larger and denser than what exists, it is difficult to argue that the next one shouldn’t also be allowed given the OMB favours (all-things-being-equal) like treatment in the application of land-use controls. That means once a new precedent has been set the onus shifts from proponent to planning authority (City Council) to establish why reasonably similar applications should not be approved. 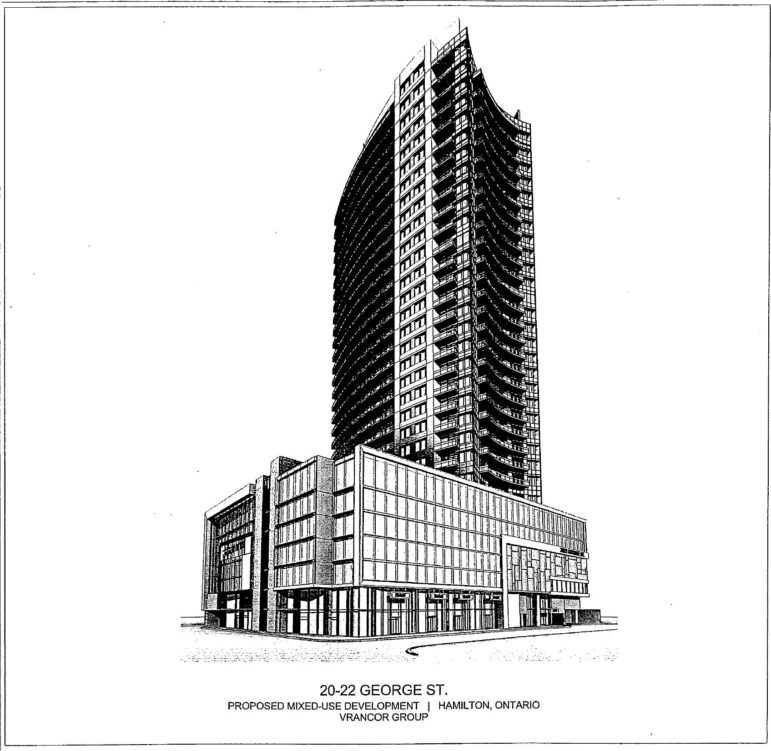 Rendering of 22 George Street Tall Building which was approved as a minor variance from 22 metres to 106 metres.

This is why height is often a sticky point in planning disputes and we see strange and sometimes counter-productive (from the point of view of design and architecture) fights over whether a project should be 30 or 34 storeys. Aside from apparent NIMBY opposition to towers in or near low-rise residential areas and architecture/design considerations, height is about the power to determine how much can be squeezed onto a particular land parcel. To put it bluntly it’s about dollars-and-cents for proponents—more floors means more floor-space or units—and maintenance of overall planning authority and negotiating leverage for the Planning Division and City Council.
We don’t yet know how the LPAT might alter this dynamic, but in theory it should shift the balance of power back toward municipal councils and to those who elect them. Certainly, the development industry fears the latter. Rather than reliance on “good planning” in its broadest meaning and most liberal application, appeals to the LPAT may only be made on the basis of whether a decision (in whole or in part) is “inconsistent” with the PPS or fails to “conform” to or “conflicts” with the Growth Plan or fails to “conform” to the applicable municipal Official Plan.
On its face this changes the rules of the game significantly and suggests, amongst other things, that municipal councils will have an increased able to set height and density ranges in their Official Plans and Zoning By-laws provided they can be defended as consistent with the PPS and be shown to conform to and not conflict with the Growth Plan.
What will “consistent” with, “conform” to, and not “conflict” with actually mean in practice?
To say for certain we need enough appeals to run their course under the new framework. An educated guess might forecast that empowering municipal councils will rebalance the planning and development approval process, so that the purposes laid out in Section 1.1 of the Planning Act can be more fully realized. A key component of that would be restoring local democratic control of planning, which many believe the OMB had come to seriously undermine, provided municipal decisions follow the lattice work of applicable policies/rules, so to speak. 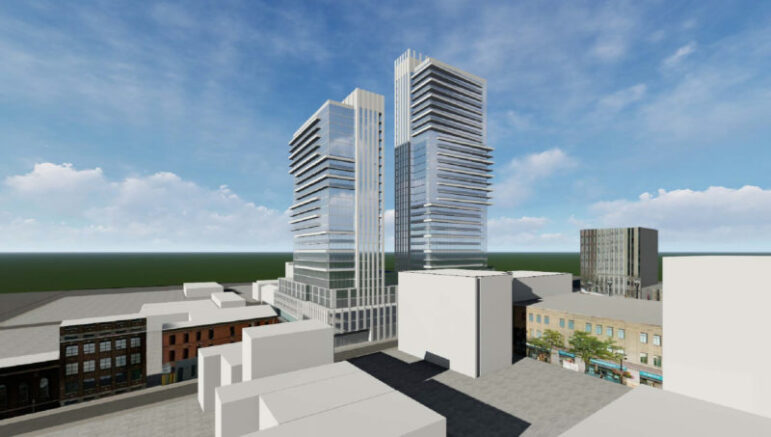 Where might this lead?
That depends on whether municipal councils in being responsive to voters strike the right balance between what “near neighbours” want and what is in the broader public interest—i.e. can they mediate conflicts that arise between adjacent or proximate residents/property owners without falling prey to the sort of paralysis that might result if no one is willing to compromise.
The overall aims of provincial policies such as the PPS and Growth Plan, not mention major investments in rapid transit infrastructure via Metrolinx, are to gradually make our cities and suburbs more compact and dense so they are more tax efficient and transit-supportive. Those aims, along with curtailing farmland devouring sprawl, are easy to support, in principle. They prove harder for many to support when they mean densification next door, on your block, or in the neighbourhood.
In my next and final installment on the new DTSP for TPR, I’ll explore several of policies that get us beyond height and density. The new plan, to the extent it can, speaks to culture, public spaces, heritage, housing, and environmental concerns that remind us that planning isn’t merely reducible to planning for development—it should embrace the “soft city” that each of us creates through a mix of mundane interactions, desire, imagination, daily routine, and our participation in social and political life.