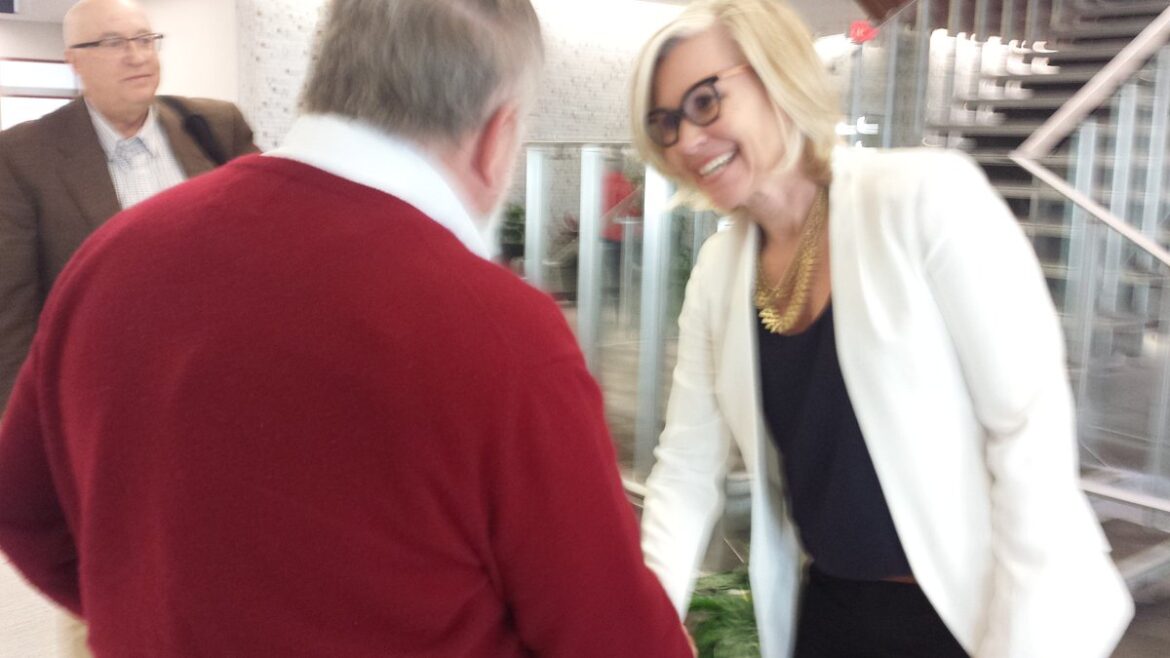 Ted McMeekin and Jennifer Keesmaat meet in the lobby of Hamilton City Hall prior to a private meeting. (Larry DiIanni in the background was not in the meeting, much like TPR Editor Joey Coleman, he happened to be in the City Hall lobby at the same time)

Hamilton-born former Chief Planner of Toronto Jennifer Keesmaat was at Hamilton City Hall Monday to meet with local MPP Ted McMeekin. Asked about the purpose of their meeting, “it’s under embargo” was the response with a smile. (Meaning they were not going to share what they were meeting about, not that there is an actual embargo)
Keesmaat is now CEO of the Creative Housing Society (CHS), a new corporation which is seeking to build 50,000 “affordable” rental units which will target middle-income rents who are presently being priced out of the market.  (Quotations on affordable due to there being no agreed definition or formula to the term affordable rental units)
CHS hopes to partner with municipalities, which are cash poor but land rich, to build on land owned by cities.
The municipality gets more rental housing, and CHS is able to build at a lower cost in places where land values are the primary pressure making rental housing construction unattractive for the private sector.
In a recent interview with TVO, Keesmaat states her new venture wishes to start building its first rental project within one year, are looking at the Toronto or Vancouver market for the first project. Hamilton’s housing market is now directly tied to Toronto’s.

The City is looking for a private-sector partner for a planned CityHousing development at 191 York Boulevard.
In 2016, the City started seeking a private partner, stating its desire to see a 20-storey 400-unit mixed-income mixed use development at 191 York Boulevard to include “affordable” units.
Last week, the City announced $9.51-million in funding for the project from the proceeds of a complicated land sale arrangement with the Province and Mohawk College.
Last week’s arrangement saw the Province transfer the former Hamilton Psychiatric Hospital site at West 5th and Fennell to the City of Hamilton, the City then sold portions of the lands to Mohawk College – which is presently landlocked and in need of room to expand, and the money from the sale was transferred to CityHousing for the 191 York Boulevard project.
Ted McMeekin’s fingerprints were on the arrangement. The usual (and arguably proper) procedure is for the Province to sell its land at market value or lease at a nominal fee to other government bodies. In this instance, the land was transferred to the City of Hamilton at no cost, then sold to Mohawk College which itself is an agent of the Province.
Somebody had to maneuver this deal at Queen’s Park, and convince civil servants in the Mowat Block (Ministry of Advanced Education) and Ferguson Block (Treasury Board Secretariat) to allow this deal to proceed. McMeekin is one of the few MPPs who commands enough respect and trust in the civil service to be able
McMeekin completed his Social Work Masters thesis in 1975 on affordable housing. In my recent conversations with him, he says his primary passion remaining in politics is to create more affordable housing. 191 York Boulevard is one of his present obsessions.
Keesmaat is looking for her first project, the City is looking for a partner, $9.51-million is already on the table – plus the value of the land – as the municipal contribution, planning approvals are effectively guaranteed, the City already has policies in place to waive application and development charge fees.
This is the perfect project for Keesmaat.
We’ll have to watch and see.