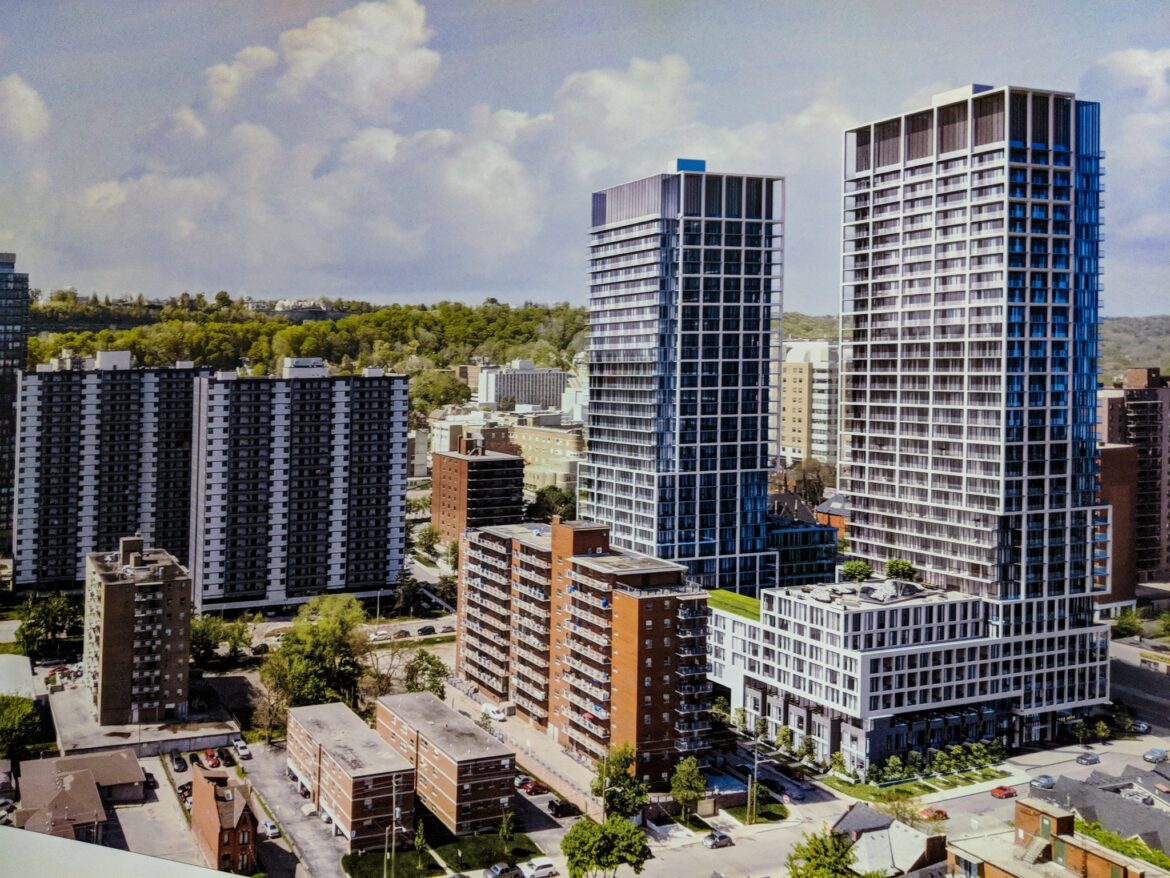 Slate Asset Management is planning to submit application for two tall buildings on the present site of the Corktown Plaza at 225 John Street South.
At a public meeting Thursday night, they unveiled plans for a mixed-use development with one tower of 31 storeys and another of 34 storeys. Slate says they’ll be rental aparements, with a podium of six to eight storeys that will consist of retails, apartments, and parking hidden out of view.
Slate’s application is one of the first following the passage of the new Downtown Secondary Plan and the enhancement of the Tall Building Guideline into policy. Corktown Plaza is just outside of the Downtown Secondary Plan boundaries.
I wasn’t able to attend last night’s public meeting, I have been working on this file for a few weeks now.
In late April, I asked Hamilton’s Chief Planner Steve Robichaud if this development will be judged against the Downtown Secondary Plan. Robichaud stated that it will be expected to meet the intent of the plan as well as the Tall Building Guidelines.
In early May, Brandon Donnelly, Slate’s Vice President of Development, stated that they plan to submit an application that would meet those tests.
Donnelly posted a summary of the proposal on his blog this morning.
We’ll need to await the submission of the detailed planning application in the coming weeks to learn the height in meters as it relates to the escarpment, to see if the proposed 31 and 34 storey buildings meet the new Downtown Hamilton height limit.
The property is presently designated to be zoned Mixed Use Medium (C5) with a height limit of 22 metres. The City’s new Commercial Mixed Use Zoning is not in effect due to an ongoing Ontario Municipal Board appeal by 26 different appellants of the city-wide zoning plan.
The property is close to a GO Station, and on a major arterial road. There are existing 14 and 21 storey buildings across the street from the property.
Corktown resident Cameron Kroetsch – who is running for Ward 2 City Councillor – posted a series of photos of Slate’s proposal to his Facebook page last night.  Beasley resident Corey Helie-Masters posted a good photo of the render to his Twitter account last night.