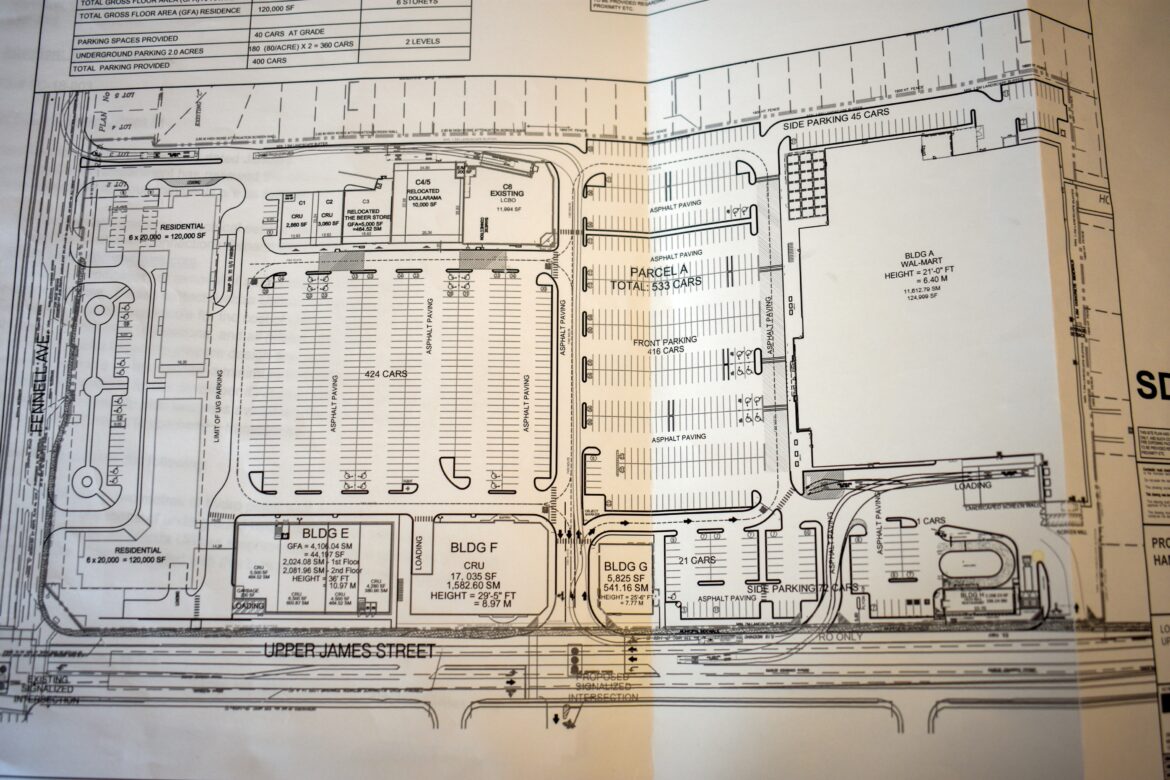 The site layout proposed by SmartCentres in their planning proposal. Photograph taken on March 1, 2018

SmartCentres is planning to redevelop the last remnant of the former Mountain Plaza Mall into residential mid-rise buildings. In mid-2017, SmartCentres formally submitted conceptual plans for two six-storey buildings on the north side of the property bordering Fennell Avenue at Upper James Street.

SmartCentres met with City Planning and Public Works staff in early April for a Formal Consultation meeting as they explore what opportunities exist for phrased redevelopment of the large retail site.

The planning file for the proposal shows it is in early stages, and SmartCentres is conducting market research to determine if there will be ground level commercial in the buildings, and determining the state of the residential market before finalizing their application.

The Public Record usually waits for the Design Review or public notification stage of the planning process to report on these type of projects; as it is common for major details to change while developers conduct early meetings with city staff. To finalize their submissions, developers spend tens of thousands of dollars on professional consultants, engineers, and architects prior to the public meetings stage.

Mountain Councillors Donna Skelly and Terry Whitehead both state the Mayor was recently briefed on both the Lime Ridge Mall and Mountain Plaza planning applications.  Lime Ridge Mall made their intentions known during the Commercial Mixed-Use Zoning consultations, which granted them permission for residential mixed-use. The new Citywide Commercial Mixed Use Zoning is subject of a OMB appeal.

Both Skelly and Whitehead say they’ve been consulted by SmartCentres and Lime Ridge owner Cadillac Fairview on plans for residential mixed-use buildings.

The former indoor mall on the site was demolished starting a decade ago when the site was converted into a big box store format. SmartCentres said it was a $50-million redevelopment at the time.

In 2016, SmartCentres requested the City of Hamilton extend their demolition development charges credit, saying the 2008 recession impacted slowed their development plans. In March 2017, Council voted to extend 47,248.61 square feet of development credits worth $916,000.

Mall redevelopments into mixed-use communities is a North American wide trend, with commercial real estate development companies, planning schools, and municipal governments all planning for residential mixed-use with the changing economics of retail.