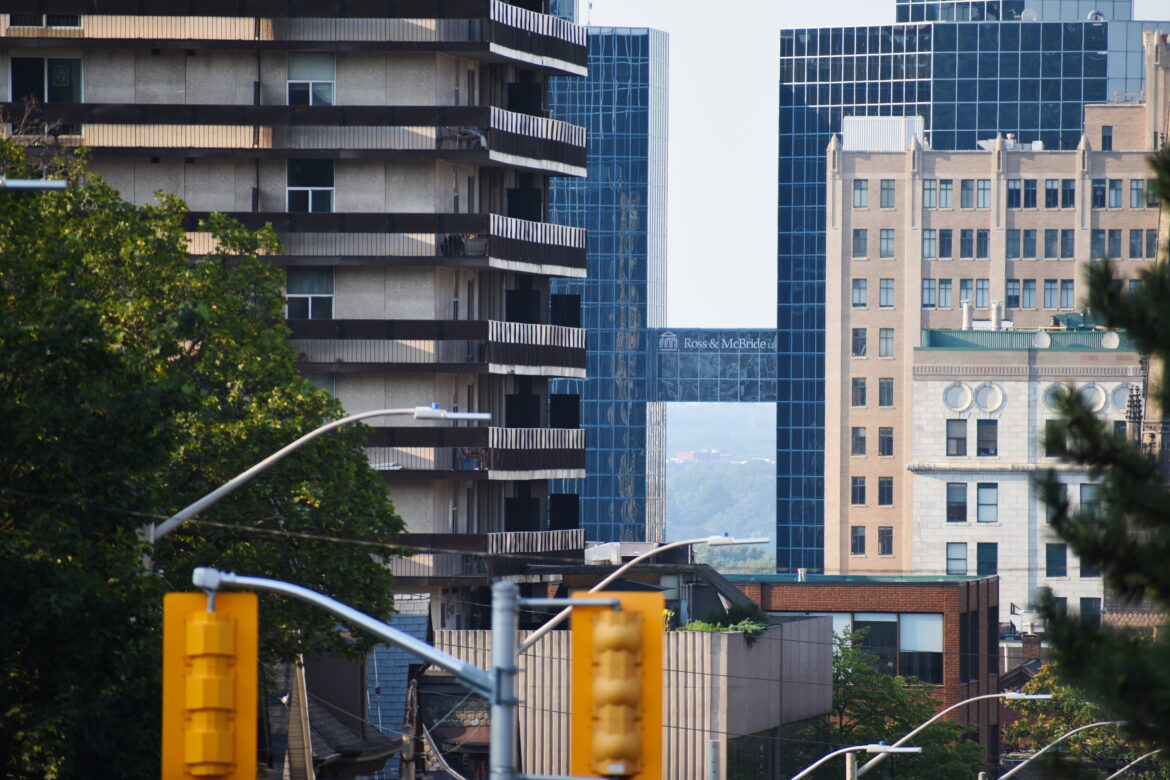 On April 17, the proposed new Downtown Hamilton Secondary Plan is scheduled to go to Council’s Planning Committee for approval. It’s taken a while to get here. As The Hamilton Spectator reported after its release, “After two previous drafts, the revised plan is expected to be the city’s third and final kick at the can following a review that first launched in 2008.”
The plan has a clear vision for Hamilton’s core: intensification, particularly in the form of tall buildings up to 30 storeys in height, or the level of the escarpment, whichever is lesser. The new height limit aligns with the spate of development applications from developers for towers in the downtown planning area, as well as in adjacent neighbourhoods.
Hamilton’s current Downtown Secondary Plan was approved in 2001 after a period of relative stagnation following economic difficulties during the 1990s. That plan, called “Putting People First” anticipated modest development pressure and topped out at 15 storeys on Jackson Square and along a stretch of Main Street East.
The new draft, by contrast, responds to current development pressures and seeks to provide a framework for shaping growth in the downtown area for the foreseeable future—until 2031.
Once approved by Council, we can measure how successful the new Plan is by the number and timing of Official Plan Amendments going forward. If they begin to occur in the first five years after the Plan is approved with any regularity and call for significant departures then either the Plan misjudged where things were headed or the integrity of the Plan was undermined by Council decisions.
In recent months, the City’s Planning Division and Council have effectively defended a central piece of the new Downtown Secondary Plan: the 30 storey height limit. But it has done so without the full benefit of the accompanying design guidelines, which are intended to further refine what is permitted and curtail over-development on specific parcels and blocks.
This is why it is a mistake to simply look at the height map and conclude that with so much space designated “up to 30 storeys” every parcel so labelled could eventually yield at tall building of that height. 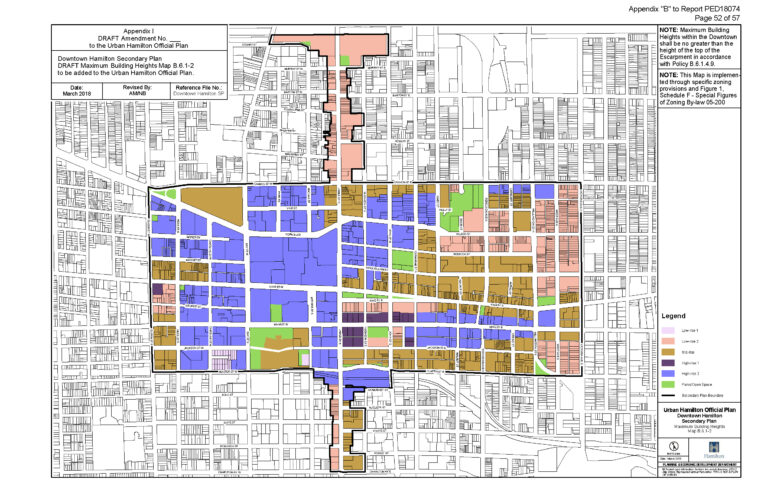 Indeed, policy 6.1.4.22 in the new Plan explicitly warns against that interpretation, stating:

It remains to be seen how this will play out in practice, but the Planning Division has given itself and Council the necessary tools to exercise reasonable land-use control to protect against over-building, as well as to ensure future tall buildings enhance the spaces around them. That won’t please those who favour low- and mid-rise intensification exclusively, but it strikes an important balance and gives the City an increased ability to achieve its intensification aims without widespread redevelopment of existing low-rise housing.
To understand how this is intended to work, you need to drill-down in the new Plan’s accompanying Tall Buildings Guidelines to sections 3.0 Contextual Considerations and 4.0 Building Articulation, which establish how a tall building should fit into the built fabric and the design expectations that its base and tower must achieve.
Some of these are requirements are quantifiable and have been included in the Zoning By-law amendments that Council will consider for approval next month. Of particular importance is the requirement for minimum setbacks from the street line and stepbacks from the lot-line, with the latter increasing at 22 and 44 metres in height, as well as a minimum separation between towers.
The intent is to have new tall buildings sit on low-rise podiums that establish a human-scale interface at street-level, while also reducing wind and shadowing impacts on pedestrians.
Critics suggest this approach could become formulaic and it could. But the Plan allows via policy 6.1.4.20 that, “it is not the intent of the Downtown Hamilton Tall Building Guidelines to limit creativity and innovation in design … alternative built forms shall be permitted, subject to demonstrating good planning principles and meeting the intent and vision of the policies of this Plan.”
This ensures the Plan isn’t too rigid or prescriptive. Alternative built forms are permissible without an Official Plan Amendment, but a site specific rezoning (or possibly a minor variance) would be needed.
Though hardly fool-proof, the new Plan’s policies aim to encourage applications for tall buildings on larger sites, such as parking lots, that can readily accommodate them, without unduly impeding the reasonable development of other sites.
So, there is a need for nuance in assessing whether the plan will simply produce a “forest of towers” downtown. A marked shift has taken place and Hamilton appears set for another high-rise construction boom. But the new Plan gives us a framework to more sensitively shape the built fabric added to our downtown core if the political will exists to enforce it. 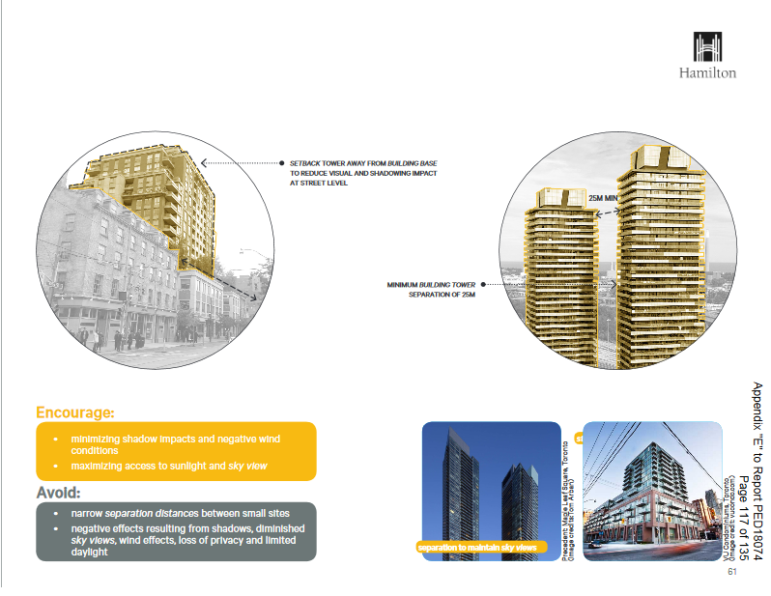 This post has focused on tall buildings because the new Downtown Secondary Plan appears set to usher in a new era that could see many built. However, the Plan also envisions reinvestment via retrofitting existing structures and the eventual redevelopment of certain areas at a more modest low- and mid-rise scale, especially along the edges of the planning area east of James Street.
The planning area is quite diverse in terms of physical fabric and includes parking lots and low-rise areas. As is the case whenever height and density permissions are increased, we can expect speculative activity and land assembly to occur. We can only hope that neither will be too excessive—or disruptive to the plan and it’s guiding principles, such as “build on existing strengths” and “recognize the value of modest improvements and changes”.
The new Plan also includes policies that reach beyond design and what can be built to allow increased flexibility in permitted uses. It speaks to how the public realm should be improved, how our built heritage will be preserved, how development might produce what provincial policies refer to as “complete communities”, and how higher-density development might be leveraged to provide community benefits.
Over the next few weeks subsequent posts will explore further these aspects of the new Plan.
Stay tuned.